The other day I came across a column I’d written for SI On Campus in April of 2005. It’s about poker, specifically Texas Hold ‘Em. I doubt it ever made it to the web. Thought a few of you might enjoy it.

During a three-month jag through Poker Nation, the author went all in, bluffing TAs and getting schooled by future MBAs

Seductive eyes. Charming smile. Eric has been coveting my stack of chips from the moment he met me. And he is good. Real good.

Eric took his professor to school. And now he was looking to do the same to me. Eric is the devil—don’t think I didn’t notice that he beat his professor with a 6-6-6.

Three months ago I didn’t know a big blind from a duck blind. The first time I sat in on a game, on Super Bowl Sunday at the University of Florida, I was relieved of my entire $20 buy-in after only two hands. Gainesville? Lossesville.

Greater moments of ignominy awaited on my Heart (Club, Diamond, Spade) of Darkness odyssey. When an internet poker honcho’s offer to put me in touch with Doyle Brunson was met with apathy on my end, he asked, “Do you know who Doyle Brunson is?”

“He’s the Babe Ruth of poker.”

“Who’s Babe Ruth?” That, I have since learned, is called re-raising with rags.

“The thing that separates good players from marginal players,” Flounder, a Duke senior, told me a month later, “is knowing when to fold.”

To think it cost me $100 in Durham that evening to learn that lesson, whereas I would have only had to spend $10.97 (plus shipping and handling) to purchase Kenny Rogers Greatest Hits. Remember when eight guys would sit around a table and smoke pot instead of splitting one?

But by now, sitting next to Eric in Bloomington, I too have become a poker face. I marvel at how addictive hold ’em is, remember what an undergrad at Central Florida told me: “My roommate is begging me to quit playing poker. Can’t stand what it’s doing to me—and she’s a stripper.”

I’m in. Eric’s in. Everyone else, after the two of us raised pre-flop, has folded. The flop comes a 3-5-8 rainbow and I raise. Eric re-raises me. I have yet to read Super/System or Super/System II, Doyle Brunson’s epochal how-to tomes on the game (whereas Eric, when I asked, “Have you read Super/System?” replied, “Which one?”), but I’m putting Eric on a high pair. The rainbow (three different suits) means he is not drawing to a flush, and his pre-flop raise indicates…well, what do I know? I’ve lost $140 researching this story. 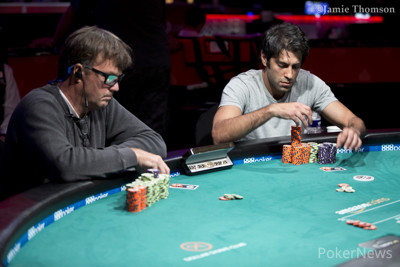 Eric grins. Studies me. Ten minutes ago I won a big pot holding nothing better than K-2 off-suited. Is the dude from SI bluffing again? Eric wonders.

“All in,” he announces, turning over his hole cards. His friends “ooh” and “ah.” My head drops as swiftly as the trap door on a hangman’s gallows.

“Got a pair of kings,” Eric says. His eyes radiate. The glow from his smile can be seen in Terre Haute. The $160 pot is—

*Looking back on the story, Eric could have won if a king had come down on the turn or the river. It did not. Not sure why I forgot to mention that.

One thought on “HANDS ACROSS AMERICA”