Devastation, deforestation,  saturation, and evacuation: that is Sandy, and no, Mike Tyson is not writing this entry. Let’s hunker down and recap the “super storm.”

Breakout Stars (on a night of “Not Any Stars”): Ali Velshi, Governor Chris “I could care less” Christie, the dangling boom, Mayor Bloomberg’s sign-language interpreter, the Chelsea dollhouse, the Lower East Side transformer.

Sea-N-N: The seminal cable news network appeared to adopt a water’s edge doctrine for all its on-air personalities, including Anderson Cooper and Erin Brunette. Then there was Ali Velshi, a business reporter who found himself full-moonlighting as a human flood gauge in Atlantic City. Velshi spent most of the evening on a main drag immersed in anywhere from two to three feet of water, providing saturation coverage in every sense to CNN’s reporting. Our only question: Where was Lou Waters?

Fool in the Rain? Velshi was both ubiquitous and amphibious

The Dangling Boom… Poised 90 stories above a luxury apartment being constructed at the corner of 6th Avenue and 57th Street, a crane went from being fully erect to suddenly, well, flaccid on Monday afternoon. The first furious winds of Sandy had sent it into this position, creating the largest and most conspicuous metaphor New Yorkers had seen in quite some time. The building, One57, will house millionaires and billionaires — the top two properties have sold for $90 million (so, you know, Occupy’ers, if you’re looking for a new intersection on which to set up camp).

The Dangling Boom not only poses great danger — it weighs a few tons and is poised 1,000 feet above one of the busiest intersections in Manhattan — but also provides a living symbol of the price of conspicuous consumption. “It’s the Crane of Damocles,” one of our more clever (okay, our most clever) friends texted. “It’s hanging over the head of everyone who aspires to be nothing more than rich.” That, and anyone who was hoping to pop in for happy hour at Rue 57.

Irony Alert/False Alarm  Only a few hours later someone tweeted that CNN was reporting that the floor of the  New York Stock Exchange was under three feet of water, prompting some wiseguy (looks around innocently) to tweet, “Great. Wall Street needs yet another bailout.”

Alas, the news was false.

Lydia Callis, the sign-language lady at Mayor Bloomberg’s press conferences. We both sing and sign her praises. Watch here.

So at around 10 p.m. Monday night, on the local NBC affiliate, an ad ran for the Bahamian resort Atlantis, conjuring images of an undersea city. Just what New Yorkers needed to be thinking about at the time.

Both David Letterman and Jimmy Fallon did their late-night talk shows in front of empty houses on Monday night. Here’s a clip from Letterman’s “monologue” and from Fallon’s open. As you can see, it was a refreshingly different way to open both shows. Here’s hoping it persuades both men to step out of the routine a little more often. Letterman used to be renowned for stepping out of, and then stomping, the box. Here’s Dave’s “Frankenstorm Top Ten” list (“Trumpical Storm?”).

Chris Christie. How cool is New Jersey’s governor? He’s like Tony Soprano without all the contract killings and Russian hookers (as far as we know). Christie called out the Atlantic City mayor who failed to heed his warning to have everyone evacuate, praised the Democratic president for all of his assistance (“I spoke to him personally three times yesterday and he gave me his phone number at the White House”) exactly one week before the election, and when asked if GOP candidate Mitt Romney might be touring the areas of devastation in New Jersey, bluntly replied, “I could care less” before taking a huge bite out of a meatball sub. Or we may have imagined that last part, but we still love the governor of our home state. He fits it like a jughandle. 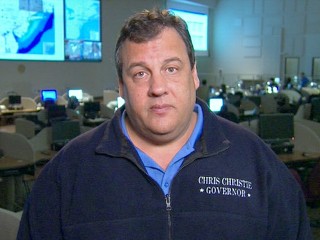 That same clever friend of ours noted that every time he saw the graphic “Sandy Ravages” on CNN he thought of “Randy Savage.” So, it was a Macho Storm, too. The Chelsea dollhouse, or as any NYC real-estate broker would describe it, “Plenty of available light.”

A religious zealot could make the argument that God was punishing the Jersey shore for Snooki and J-Wow, and who could blame them?

Thing we won’t forget: the young man taking shelter in the ATM vestibule at about 5 p.m. Monday afternoon, asking us when the subways would be up and running again. “Days,” we replied. “Where do you live?”  His answer: “The Bronx.” The look on his face…

Our one hope was that the storm would abate for five seconds, and that a disembodied voice would boom down from the heavens proclaiming, “YOU MUST START THE TEBOW!” Then the storm would resume. That would’ve been the ultimate OMG moment, emphasis on “G”.

“God saw how great wickedness had become, and that Tebow was only seeing playing time as a punt protector, and decided to wipe mankind from the face of the earth.”

Herman Cain. Hurricane. We’re still trying to divine any meaning from that correlation.

4. Anything by the ’80s Scottish pop band Wet Wet Wet (we’ll vote for their remake of “Love Is All Around”)

6.  Rock You Like a Hurricane……….Scorpions (we are no fans of the tune, but it’s sort of obligatory)