1. Who’s hot? J.R. Who shot? J.R. New York Knick forward J.R. Smith buried not one but two ridiculous jumpers in the final 10 seconds las night to propel New Yawk past the Phoenix Suns, 99-97. In a game in which the Knicks were without their two top scorers, Carmelo Anthony and Raymond Felton, Smith demonstrated why he just may be the team’s second-best player. The second-most famous native son of Freehold, N.J. (“Bruuuuuuuuce!”), Smith had a key steal with about five minutes remaining to tie the score at 90. With 10 ticks left Smith, who LeBron’ed college, hit a 22-footer from atop the key with P.J. Tucker draped all over him to tie the score at 97.

Then, after a Sun turnover with 1.0 seconds remaining, Smith took an inbounds pass and hit this bizarre shot from the left corner. And if you’ve watched this hired gun (J.R. Smith & Wesson?) shoot jumpers dating back to his days with Denver, it did not surprise you one iota (has anyone ever typed “two iotas”? “Two iotae?”). In fact, it was Smith’s second buzzer-beating game-winner this month (he had one on December 5th at Charlotte).

2. Welcome to Intermina-bowl Week: San Jose State vs. Bowling Green today (Military Bowl), Ohio vs. Louisiana Monroe tomorrow (Independence Bowl), and Rice vs. Air Force (which is an anagram of “For a Rice”) in the Armed Forces Bowl (which has a second amendment right to exist) on Saturday.  There are a few good contests within — Baylor vs. UCLA tonight from San Diego may provide intrigue — but what you must remember is that December bowls = ESPN programming, and nothing more.

3. Steve Nash’s new team lost last night at Denver because they don’t play defense and allowed 126 points. Two of Nash’s former Sun teammates, a pair of players who benefited TREMENDOUSLY from his mentoring while all were with the Suns, had either season- or career-highs in points. Center Robin Lopez, now with New Orleans, led the Hornets to their first win in 12 games by scoring a game-high 29 points at Orlando (but ESPN still featured him getting posterized on Top Plays). Forward Jared Dudley, whose locker was next to Nash’s and practically worshipped the fellow Catholic college alum (B.C., Santa Clara), scored a career-high 36. If we know Nash the way we think we do, he sent Dudley a congratulatory text before he hit the pillow. Oh, how we miss those halcyon Sun days (video shot and directed by Mr. Nash)…

4. Kate Winslet really married a dude whose surname is Rocknroll?!?! Ned Rocknroll (ne Abel Smith), 34, is the nephew of UK tycoon Richard Branson (and really, shouldn’t HE be the next king of England? He even looks the part). No, their wedding song was not “I Wanna Rocknroll All Night (And Party Every Day)”, but seeing as how Winslet, 37, already has two failed marriages under her corset (When will she realize that she’s destined to end up with Jack Dawson?!?), we won’t be overly surprised if the epitaph of this betrothing is the title of an underrated album from that same band, KISS. 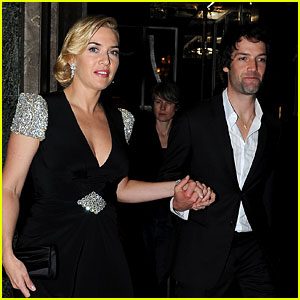 How they met: She saw him dancing there by the record machine/Knew he musta been ’bout seventeen…

5. Shanghai Surprise II, Dorsal Fin Boogaloo: A 3,000-gallon shark tank at a mall in Shanghai shatters, sending scores of Negaprion brevoristris (i.e., lemon sharks) toward shoppers. We know what exactly what you are thinking: What were Gilbert Arenas and his teammates doing inside a 3,000-gallon aquarium?

Only one NBA player averages more than 40 minutes per game. Can you name him? Hint: he is NOT in the NBA top ten in any major category outside, of course, of minutes played (answer below).

Remember when Notre Dame linebacker Carlo Calabrese infamously threatened an officer –twice!–with “My people will get you?” Well, it may be just a coincidence of surnames, but there’s one less “people” for law enforcement officials in South Bend to worry about today. All in the family?

Sopranos impresario David Chase, the Martin Scorcese of the Garden State, has made a film that features New Jersey and James Gandolfini but has no connection to wise guys. Instead, it’s a semi-autobiographical coming-of-age flick about teenagers in the early Sixties who are inspired to play rock and roll after seeing the Rolling Stones. It’s called Not Fade Away and I promise the final scene is not scored to “Don’t Stop Believin'”.

A seven-foot tall thief is on the loose in Chicago. John Calipari: “Apprehend him? I’d like to sign him!”

So Randi Zuckerberg, the sister of Facebook founder Mark Zuckerberg posts a family photo on Facebook and then becomes SHOCKED and APPALLED when that photo shows up on Twitter. Somewhere a lot of women who attended Harvard in 2004 are howling.

We could be wrong on this, but the tallest athlete in Notre Dame history? Ryan Doherty, seven-foot-one. His sport? Baseball. Yes, baseball. We came across this piece on the 2002 Irish grad, who finally has grasped an understanding of the word morphology.

Kelly Lundy, a.k.a. Suzy  Favor Hamilton, could be in even more trouble than David Gregory. Also, as avid readers of “Tater Talk” are aware, she has lost her contract with the Wisconsin Potato and Vegetable Growers Association. And yet there is something so refreshing by her unabashed ownership of these deeds.

Ethical and journalistic question: We personally have known about George Bush’s medical condition for nearly two weeks. The nation’s 41st president, 88 years old, is reportedly in more grave condition than has been made public. Our question is: What does the Today Show, one of whose correspondents is President Bush’ granddaughter, Jenna Bush Hager, do about this? Is it a vital, breaking story? No. Do you want to be first? Probably.