1. Have yourself Avery Johnson Christmas/Let your heart be light/From now on our troubles will be out of—– Screeeeeeeech! The Brooklynettes fire their coach, whom you may remember was named the NBA’ s Coach of the Month way back in, when was it, November? His son, Avery Johnson, Jr., tweets, “I’m sorry are best players couldn’t make open shots…” and “The expectation were way to high…”

2. It’s hard to dispute this logic: Congress gave itself an extra, what, 18 or so months to solve the fiscal cliff crisis and here we are three days from fiscapocalypse (while Jon Stewart is on hiatus, it is left to us to create newphemisms to describe the political landscape) and they are no closer to a resolution. If we gave them more time and they squandered it, you can understand why so many Americans are loathe to give them more money, i.e., taxes. Congress: Clowns to the left of me/Jokers to the right/Stuck in middle with you (and a $12 billion difference in settling).

3. The Los Angeles Police Dept. stages a gun buy-back in which 2,037 firearms are taken “off the streets” (or out of Phil Spector’s garage). The weapons cache-for-cash event yielded 40 assault weapons and, yes, someone even turned in a rocket launcher (never knew that Homer Hickam lived in LA). LA mayor Antonio Villaraigosa on the assault weapons (and we assume, rocket launcher, which the LA Times, regrettably, references only once: “Those are weapons of war, weapons of death. These are not hunting guns. These are not target guns.”
All of the weapons will be melted down.

4. San Jose State wins a bowl game in front of an announced crowd of 17,835 at RFK Stadium (“The Military Bowl was filmed before a live studio audience.”). This was the smallest bowl game attendance in seven years. If a bowl game — or any event — has more empty than filled seats, it’s a terrific argument for not re-staging the event. Kudos to SJSU, though, its long-suffering fans and long-suffering Fan (sports info director Lawrence Fan). The Spartans should end the season ranked for the first time since 1975 and finish with 11 wins for the first time since 1940. 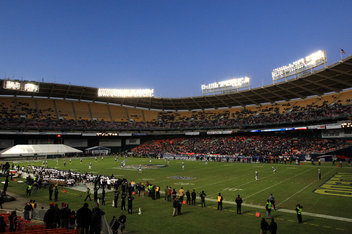 The Military Bowl plays out before a Yawning Room Only crowd

5. Retired five-star general Norman Schwarzkopf fades away in Tampa at the age of 78. Schwarzkopf dies of natural causes — as do we all.  The ursine commander of Operation Desert Storm was a West Point graduate who volunteered for two terms in Vietnam. His father, who had the same name but only rose to the rank of colonel (as if that’s peanuts), once

Would anyone have a problem is Suzy Favor Hamilton simply said, “Why’d I do it? Boredom. Why the hell not?” Sure, being the spokesperson for the Wisconsin Potato and Vegetable Growers Association is cool beans (literally), but maybe she just got tired of being everything that she was expected to be. I guess our question is this: Does she have to be “suffering from depression” to pull an Elisabeth Shue or, more closely, a Diane Lane in Unfaithful? Why does she have to have a condition? And who are we to judge? Illegal. Yes. Ill? You decide.

The Los Angeles Clippers have won 15 in a row. Yes, Vinny Del Negro is still the coach.

The Alabama quarterback, A.J. McCarron, is dating Miss Alabama, Katherine Webb. Of course he is. Except that Webb graduated from Auburn. She loves him for his efficiency. He loves her for her Webb gems.

Fiscal cliff. Gun debate. It’s not that this nation has never argued among itself before, it’s just that we cannot recall the last time everyone was so implacable. The Polarized States of America, anybody?

So wait a minute? You’re telling us that jumbo pretzel dogs are not healthy???