1. We should all be watching, when we get the chance, Creighton’s Doug McDermott. The six-foot-eight junior from Ames, Iowa (“Ames High Aims High”….seriously, that’s the school’s motto) is averaging 23.9 points for the No. 21 Bluejays. Last night McDermott, whose father, Greg, is Creighton’s coach, had 29 points and 10 boards in a 91-77 win against No Longer Directional Missouri State. ESPN’s Jay Williams calls McDermott “the best player in the country.” Surely he is the best college basketball player to play for his pop since Pete Maravich, no?

2. Loss Angeles blows a 13-point, fourth quarter lead at Phoenix in Steve Nash’s return to the Valley of the Sun. Nash had just two assists as the Lakers now defer to Kobe as the point/points guard in their halfcourt offense –and, seriously, L.A. has no transition game, so that’s about it. In LA’s last four games, Kobe has 48 assists while Nash, who is No. 5 all time on the career assists list, has 14. 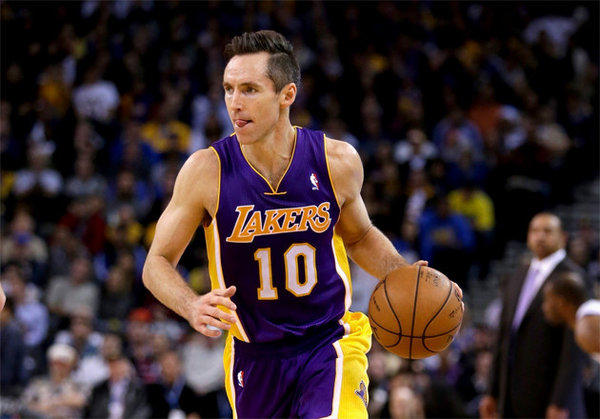 For us, there was a telling moment late in the first quarter as the camera panned LA’s bench. There was Nash, doing what he always does when he is not in the game, sitting on the floor and staring intently at the court. Behind him, seated on a chair, center Dwight Howard was looking off to his left, away from the court, and talking to someone who was seated in the stands. Told us all we needed to know about L.A.’s dysfunction.

3. Final episode of 30 Rock, the best network sitcom of this millennium, airs tonight. This will always be our favorite scene.

4. On The Daily Show, correspondent Al Madrigal reports from Hispanic Room/His Panic Room. The moment of beauty is when Madrigal shows data that show the length of grudges (using a unit measurement of generations) by ethnicity. No. 1? Italian, followed by Irish, followed by Hispanic. “A Hispanic grudge lasts four generations,” says Madrigal. “The good news is, a Hispanic generation lasts only seven years.”

5. The New York Post reports that Dan Marino fathered a love child (why do they use that term? Isn’t “lust child” more accurate?) with a CBS staffer back in 2005. Marino will only appear on air during Super Bowl pre-game festivities for four hours on Sunday, so he probably will not have time to address this topic. By the way, the story broke on the date of Marino’s 28th wedding anniversary. Nice touch, NY Post. And, Dan? Ray Lewis thanks you.