Our friend and former colleague, NFL expert Chris Corbellini, is as passionate about the red carpet as he is about the red zone. He ardently sends in his Oscar picks.

First, some qualifications are in order: I spent over six years either in front of an Avid machine or a sound stage at a motion picture production house. This gives me a puncher’s chance of accurately predicting the technical categories no one cares about. The rest is personal preference to wildly-varied and entertaining pieces of art. I also watched “The Master.”

SCOUTING REPORT: Here are the No. 2-3 hitters in any Hollywood lineup, capable of setting the table for other performers or blasting one to the left-center bleachers. Every nominee already has an Oscar in his trophy room. De Niro is a solid choice and word-of-mouth praise could help, but will the Academy reward him for getting his heart rate up on one occasion after coasting all these years? Contender Christop Waltz never takes a line of dialogue off and has a stately air about him, but Leonardo DiCaprio, bloody hand and all, was a tornado in Django and outshines him a bit as a supporting performer. 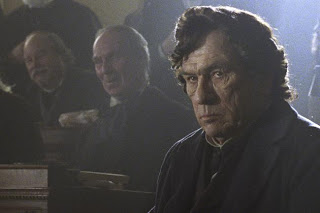 This is not Chris D’Amico. Swear.

SCOUTING REPORT: Not an especially deep field this year. It felt like the Academy had a tough time filling out this bracket. Jacki Weaver was a strong presence in the Silver Linings Playbook household with just a few lines, and it was nice to see the movie reveals she was pulling a lot of the strings for her son’s happiness. A mother’s love could be enough. Then again, she doesn’t sing.

WHO WILL WIN: Anne Hathaway. The movie star of the group. Bonus points for her portrayal of herself wearing “Ketel One” perfume on Funny or Die’s Between Two Ferns series.

We go way back with Anne…

SCOUTING REPORT: A two-writer race between Boal and Tarantino. QT won an Oscar for scripting Pulp Fiction, and Django Unchained is not in the same class. But the Academy generally has no sense of legacy (see: Forrest Gump over IMDB.com’s No. 1 movie of all-time, The Shawshank Redemption, which every Oscar blogger and journalist is obligated to mention) unless it concerns race. I also have a theory that Hollywood can’t stand Kathryn Bigelow behind the scenes, so after begrudgingly awarding her Oscar for The Hurt Locker, the Academy is going to ignore Zero Dark Thirty this go-around. Sorry Mark. You are collateral damage.

WHO WILL WIN: Tarantino. There is no single line of dialogue that you’ll remember for the ages,  but QT did create a spectacularly evil character for Samuel L. Jackson.

Beasts of the Southern Wild, Lucy Alibar and Benh Zeitlin

SCOUTING REPORT: Argo had the best line: “Somebody’s responsible when things happen, Jack. I’m responsible. I’m taking them through.” Silver Linings Playbook was a time-capsule movie for 2012, and sharply and warmly written from start to credits. Those scripts deserve a split national title. Neither will win it outright. In the words of Terrio: “Argo f-ck yourself.”

WHO WILL WIN: Kushner. Thought process: “Didn’t Kushner write Angels in America? That was important. So is Lincoln. I’ll vote for him.”

SCOUTING REPORT: The easiest pick on the board. Hollywood is always looking for a bankable male lead for the next 10 years and George Clooney and Brad Pitt can’t last forever, so Cooper may get some consideration for the future of the business. Still, this one was over from the first Lincoln trailer.

WHO WILL WIN: Day-Lewis. If Broadway recreated the film as a play, it would sell out as long as he performed the title role.

SCOUTING REPORT: Chastain and Lawrence. In Jessica’s case you are celebrating obsessiveness, which is tricky. Instead of the white whale sinking the ship, which is the message of so many stories, she triumphs. If Chastain stepped out of that tent at the end, stared out into the desert and then fell over and died from exhaustion, it would not have surprised me. Her chief competitor had more to do. She had to be funny, warm, more than a little off her rocker, dress down Robert De Niro with a speech about sports, and then nail the final dance number.

WHO WILL WIN: Lawrence. When she hissed “You’re killing me! You’re killing me!” to her sister before the big dance, the movie was hers. The happiest person during the after-parties will be her agent. Lawrence is already a star after the Hunger Games, and just 22 years young.

It’s impossible that Watts will win, but she still deserves an Oscar for her work in Mulholland Drive

SCOUTING REPORT: Ben Affleck deserves this one, and Kathryn Bigelow would be a better choice than most in this group. Let’s work with what we have. Zeitlin’s challenge was to create a different world in the Louisiana bayou – immediately following the BP disaster – and use a baker from New Orleans and a 6-year-old girl with no acting experience to be a family and carry the story.  Shooting on water, a backbreaker throughout motion picture history, would also be heavily involved. If directing means pulling the most out of a cast and being the decision maker for every element of the picture to final cut, he should win this. But Sir Steven Spielberg is the safe, traditional choice.

WHO WILL WIN: Spielberg. Strange because it’s so un-Spielberg, with very little in the way of spectacular set pieces beside the opening battle. This was a small picture done on the cheap, relatively speaking, with performances in darkened rooms by the fire and political halls.

Beasts of the Southern Wild

SCOUTING REPORT: There are enough nominees here to fill out a baseball lineup. I enjoyed Silver Linings Playbook the most of this group, and wondered how Beasts of the Southern Wild lifted something special out of a muddy, garbage-strewn swamp. Life of Pi was pretty to look at and should win the technical categories. Amour and Lincoln may be sentimental choices. Django celebrates Westerns; Les Miserables, musicals. None of them have the all-around greatness for the gold medal. So it’s Argo and Zero Dark Thirty, then. Of the two, Zero Dark Thirty creeps slowly and steadily to that tense finish. Argo is tense from the opening shot until the plane is the air.

WHO WILL WIN: Argo. Affleck’s comeback is complete. Like Eric Clapton once sang: “Everyone wants to be your long, lost friend.”