Here comes the dreaded spoiler alert: I’ll be discussing Zero Dark Thirty, so if you have yet to see the film and plan on doing so, you may not want to read this. You may not want to read it anyway, and you may be asking yourself, Why am I on this site? How DID I GET HERE? In that case, you are David Byrne and I really cannot help you.

The first scene. A determined, idealistic, youthful female federal investigator — in a pants suit –enters a cell in which a prisoner who likely has crucial information about a serial killer is being detained. The investigator is chaperoned by an older male colleague who, while more experienced, will fail to obtain the information he seeks. Possibly because, in part, he does not understand the difference between abusive and persuasive.

Where have I seen this movie before?

Oh, yes, in 1991. Jodie Foster (“I’m 29!”) and Anthony Hopkins in “The Silence of the Lambs” which, for me, was a perfect film. Or as close to perfect as films get. Anyway, as engrossing a film as ZDT (that’s what we insiders call it, you know) was, at a certain point in its two-plus hours I began actively searching for related moments between the two movies. Such as… 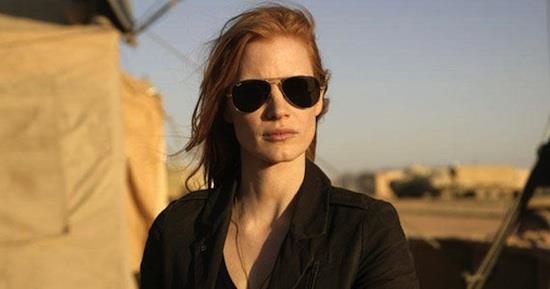 “Tell me about the imams, Clarice.”

— Clarice, with the FBI, and Mya, with the CIA, are both headstrong, obsessed workaholics whose male superiors don’t quite know how to lasso them, but who are at least smart enough to realize how valuable they are.

— Midway through the film, a planned encounter between goverment officials and a material witness goes horribly awry. In TSOTL a few police officers and a paramedic or two are gruesomely murdered as Dr. Lecter escapes from his makeshift jail in Nashville. Lecter was only there because he had promised to give the senator key information about the disappearance of her daughter. In ZDT, seven CIA officials are killed when a suicide bomber, posing as an Al Qaida turncoat, infiltrates their base in Afghanistan. You could see that rendezvous going horribly wrong from before that dusty old car appeared over the horizon (that scene also brought back memories of “Seven” for me).

— The scene in which our young heroine finds herself in a roomful of men and has to remind them that she belongs. In TSOTL it’s the moment at the funeral parlor in which Clarice, not quite yet sure of herself, orders the local cops to clear out so that she can examine the corpse. In ZDT it’s the moment in the CIA briefing room in which Mya tells Tony Soprano, “I’m the motherf*$*@ that found this place, sir.”

–The movie’s climax involves hunting down the serial killer in his own home, in complete darkness, with night vision goggles playing a key role. Also, the serial killer takes a bullet to the head. Between that scene and the movie’s opening scene, the bookending of it all, how do you not draw the parallel?
Also, there’s one final denoument moment in which we realize that our heroine is not joyous but almost lost. As if to recognize, now that there’s no bogeyman to chase, what do I do now?

“Exposed brick, eh? I like what you’ve done with the place, Dr. Lecter.”

Pants suits, monastic devotion to their cases, and red-to-auburn hair aside, Clarice and Mya are quite different people. We don’t know what drives Mya personally, only that she is precociously brilliant (the CIA recruited her out of high school). We did know what drove Clarice: the screaming of the lambs. Mya is far more demonstrative and confident than Clarice, who even as she enters the home of Buffalo Bill appears piss-your-pants terrified.

Still, the symmetry between the two films, one a classic and the latter in whatever category falls just below that, was astounding. There came a moment where I was hoping that director Kathryn Bigelow would toss in a snippet of a Tom Petty tune just as a way of winking to her audience as if to say, “Yes, I noticed it, too.”