The inspiring story of a former Gonzaga basketball player, the West Coast Conference Player of the Year in 2008, who goes undrafted and then leads Maccabi Tel Aviv to the EuroLeague Finals before finally catching on with the Philadelphia 76ers, wins Best Pic– wait, what’s that? I’m getting a message from…Ohhhhh. Never mind.

Well, they SHOULD make a movie about him.

2. Oscar Thoughts: How do you perform a song like “We Saw Your Boobs” and not mention Phoebe Cates (I know, it was awhile ago, but still…)? … Jennifer Hudson’s performance of “And I Am Telling You I Am Not Going” was three triumphant minutes of “Can you believe I did NOT win ‘American Idol’? Either can I”… Quentin Tarantino’s date was a woman named Lianne Spiderbaby. I don’t even have a joke, I just want this on the record… Seth MacFarlane: “The actor who really got into Lincoln’s head was John Wilkes Booth.” Remember, kids, “Tragedy plus time equals comedy”… The Jaws theme music play-off idea wins Best Innovation… Charlize Theron wins the Tommy Lee Jones Award for her grimace during “We Saw Your Boobs”… THIS SCENE is one of my very favorite scenes from any film, any time. In light of Ben Affleck’s “Argo” winning Best Picture last night, it is even more poignant. By the way, Affleck is still ten years away from being fifty.

Jessica Chastain: ’40s era Hollywood starlet throwback or the “She’ll-do” bridesmaid at your buddy’s wedding? Or, both?

The ESPN overhyped story of this week was Danica Patrick taking the pole at Daytona. One ESPN SportsCenter even referred to “Danica Fatigue”, which is the kettle calling the kettle black. But, you know what? Patrick traded in that hype for respect on Sunday.

While Patrick did not win the Great American Race, she spent the entire 500 miles in the hunt, became the first female to lead one lap of the race, and was actually in third place at the start of the last lap before fading to eighth.

Jimmie Johnson, racing in his 400th NASCAR event, took the checkered flag, winning the race for the second time in the past seven years.

In a race known for daring pass attempts, Fiddy made an awkward one at the Fox pit crew reporter. But, hey, it was a banner day for sexism all over. Between this, MacFarlane’s opening number at the Oscars (Naomi Watts, not amused) at the Oscars, The Onion’s unfunny, ugly tweet about nine year-old Quvenzhane Wallis, and James Franco’s “Drivers –and Danica– start your engines!” gaffe at Daytona, well, how to sum up? (I mean, at least our Jessica Chastain caption was sort of funny….no?)

“Meet The Press” took place one day early, as former Notre Dame linebacker Manti Te’o VOLUNTARILY met an assembled media throng at the NFL Combine (which is not to be confused with the NFL Concubine). Someone in the media asked Te’o if he had a “girlfriend, in real-life” (“No”). NFL Network Mike Mayock analyst assessed that the word that came to mind when he watched the press conference was “genuine.” Colleague Charles Davis quipped, “The word that comes to mind for me is, ‘Enough’.”

The Miami Heat win their 11th straight. ESPN loves the Laker melodrama, but the fact is that if the two teams in the NBA Finals are not the Heat and Spurs or Thunder, it’ll be a letdown.

A story appears in the New York Times under the byline Max Klinger. Colonel Potter would be so proud.

New York Yankee centefielder Curtis Granderson, who has 84 home runs the past two seasons and is probably the best Bomber position player outside of Robinson Cano at this stage, is plunked on the forearm in his first preseason at-bat. Granderson could miss as much as 10 weeks. It’s going to be that kind of season in the Bronx, isn’t it?

On the bright side, Granderson will now have more time to film episodes of “Psych”

Tiger and Elin, hanging together. I am SO gonna watch The Masters this April…

Would any South African males not facing murder charges please raise their hand? If your hand is cuffed, do not bother.

We’re going to attempt to give you one program, sports or entertainment, per evening to watch. It’s an experiment. We’ll see how it works. 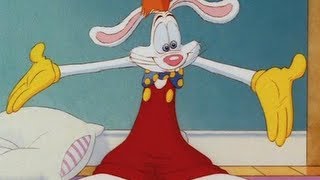 “A laugh can be a very powerful thing. Why, sometimes in life, it’s the only weapon we have.”

True story: I’m walking up Central Park West one night — this was at least 15 years ago — and I saunter (yes, I was really sauntering) past Charles Fleischer, the comedian who is the voice of Roger Rabbit. As I stroll (oh, we’re strolling now?) by, and realize who it is, I say in a voice loud enough to be heard, “Shave and a haircut.”

Fleischer stops, waits a beat, turns, grins, fixes me with a stare and says, “Twoooo bitttttts!”