1. Manti Te’o runs a sub-par 40 time at the NFL Combine, 4.82, which is the same exact time that former Ohio State linebacker James Laurinaitis ran. Laurinaitis, who once won the Laurinaitis Award (okay, there isn’t one, but doesn’t it sound like a real thing?), is now a starter for the Not Los Angeles Rams.

A.) I’ve always thought that if you were going to draft a Domer from this year’s crop, the smart money is on Tyler Eifert. I’ve been a huge fan of his for three years now.

B.) As far as Te’o’s stock has fallen since January 7, it still hasn’t fallen as far as Vontaze Burfict’s did last year. Burfict, formerly of Arizona State, went undrafted after a poor Combine and rumors about his off-the-field self-discipline and motivation (or lack thereof). The Cincinnati Bengals took him as a free agent and all he did was lead a playoff team in tackles (127) in his rookie season. So, who knows? 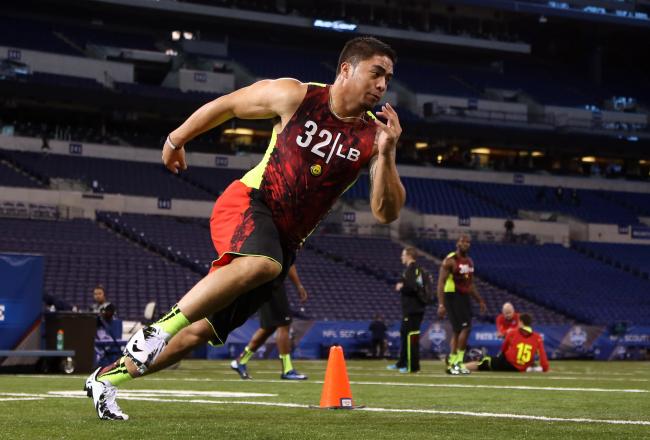 “I throw my hands up in the air sometimes/Sayin’ ‘Te’o!/Lookin’ too slow'”

C.) In the last two years Te’o played behind two defensive linemen, nose tackle Louis Nix and defensive end Stephon Tuitt, who may ultimately go higher in the NFL draft than he will. Their presence certainly helped his numbers. When they didn’t dominate an offensive line (Alabama), he looked pedestrian. On the other hand, Teo’s’ seven interceptions last fall were the most by a linebacker in 13 seasons and he anchored a defense that in 2010 allowed one touchdown over a span of 18 quarters (and that one when USC got a first-and-goal on the 4 after a turnover) and in 2012 did not allow a touchdown over a span of 19 quarters. Not bad.

2. Blackhawks Up! (Don’t faint, Billy; yes, I’m actually talking about hockey). The Chicago Blackhawks beat the Edmonton Oiler in overtime, improving their record to 16-0-3 to start the NHL season. The Blackhawks have at least one point (three for a win, one for a tie) in each game through 19 games, which is an NHL record.

3. Have you been paying any attention to Italy? So, apparently, Italians are disgusted with their political leaders (what must that be like?) and held an election and do you know whose party won control of Parliament in Europe’s third-largest economy? It was an upstart political party, the Five-Star Movement, led by comedian Beppe Grillo (there are Italian comedians?). The other two “established” political leaders who were vying for control are both convicted felons. Fortunately, the Pope is around to lend some stability to a troubled nation. Wait….WHAT???

4. Below, that is Fauja Singh, alias “The Turban Tornado”, who on Sunday retired from marathoning at the age of 101 (Singh ran his first marathon at the age of 89). If Singh is like most retiring marathoners, he will now branch out into competing in triathlons.

Singh would have made the cover of Runners’ World, but he refused to wax his chest and pose shirtless

Quick confession: I never saw the Oscars on Sunday night and only watched “We Saw Your Boobs” on YouTube, minus any context for how and where it appeared on the opening monologue. Obviously, I missed the joke. 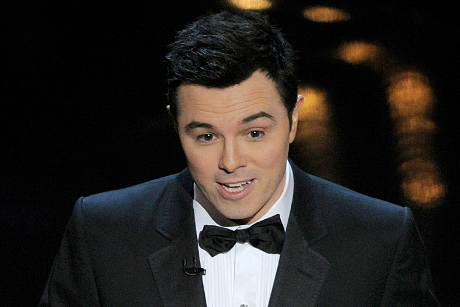 Looks, charm, can sing and dance, and funny. The Oscars’ five-tool player of a host

Last night ABC.com put the entire first hour on-line and I finally saw it. So, my one-word review? Brilliant, and I agree with everything that the fabulous Katie said. Marlow Stern of The Daily Beast begs to differ.

And now, realizing that it was obvious they’d spliced in the reactions of Naomi Watts, Charlize Theron and Jennifer Lawrence and that they were all in on the joke (something I didn’t previously realize), well that’s just more subtlety than I’ve ever been conditioned to expect from a mainstream, prime-time broadcast.

And who knew Charlize Theron was such the hoofer? Right?

Loved the “Flight Sock Puppets” bit, too. Loved that Captain Kirk (William Shatner, who had to be performing live) made the Amy and Tina reference. Love that MacFarlane made the Chris Brown joke and then said, “That’s as bad as it gets…. that’s not as bad as it gets.”

Loved it all. I hope they bring back Stewie’s dad next year.