1. “There are no second acts in American lives” — F. Scott Fitzgerald

Zelda’s husband never met Tiger Woods, who cruised to victory at  the WGC Cadillac Championship, his second PGA Tour win of 2013. Woods, who had dropped to as low as 58th in world rankings in the aftermath of his skank-shank debacle, has now risen to No. 2. He has five PGA Tour victories in the past year, more than anyone. And with 32 days before the world’s best golfers tee off at Augusta, there seems to be less drama concerning whether Tiger (who now has 76 career PGA Tour victories in 18 years, second only to Sam Snead’s 82, which took him 12 more years to accrue) will don another green jacket as to whether the first female to greet him will be ex-wife Elin Nordegren or current flame Lindsey Vonn.

Tiger Woods, located at the intersection of Boo Weekley and US Weekly

2. Indiana and Michigan, both 25-5, engage in a classic. The B1G has owned the drama in college basketball this winter — the ACC is an afterthought, while the Big East is a couple headed for divorce — and yesterday’s contest in Ann Arbor was just the latest example. The No. 2 Hoosiers overcame a five-point deficit in the final minute to prevail 72-71 after seven-footer Cody Zeller scored the game-winning lay up with 13 seconds remaining. Zeller finished with 25 points and ten rebounds as IU earned its first outright B1G regular-season title in two decades.

Zeller may be the B1G/National Player of the Year, but we love Victor Oladipo, the Michael Kidd-Gilchrist of the 2012-2013 season. It’s called “Gallon Smashing“, and it’s the most fun any college or high school student has had in a supermarket since the boys from Delta House went shopping for their party. Or at least since the turkey bowling rage of the 1990s. It’s definitely cutting into the Harlem Shake’s 15 minutes of viral fame. But, not everyone is amused.

5. Over at 30 Rockefeller Center Justin Timberlake joins the “Five-Timers Club” at Saturday Night Live. As the only five-time host of SNL under the age of 50, Timberlake, 32, is lapping the field in his era of stardom. Even if he doesn’t play the banjo. He did, however, apparently get a subtle dig in on Kanye West during a song (joining Taylor Swift among SNL hosts who have done this) (editor’s note: Jay-Z enjoyed a pre-performance meal at your favorite steakateria).

The most Timberlakian skit –and consider how much time had to be put into just this singular effort (you can’t do this by reading cue cards) — had to be “Bring It On Down To Veganville.” Anyone who can rhyme “adult ingredients” with “bowels expedient” deserves a hand.

And if you can only see one romcom starring a member of the Timberlake family, wouldn’t you rather see “She’s Got a D!&k” than “Playing for Keeps”? (alright, I’ll go see ’em both. Shhhh!)

Remember when Kramer taught the Dominicans how to roll as if they were Cubans? Now Costanza’s former employer, the New York Yankees, have a Cuban whom they hope will roll like their Dominican. Cuban defector Ronnier Mustelier is the talk of training camp in Tampa and he could just open at third base. The Yankee brass (“brass” is sportswriter speak for “guys who pay the salaries”) refer to Mustelier of a “natural-born hitter”, which is funny because their All-Star second baseman, Robinson Cano of the Dominican Republic, is exactly that. 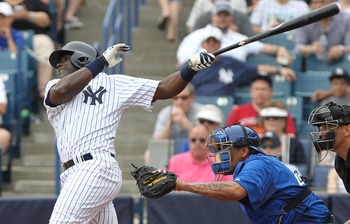 Mustelier, 28, could be the answer to “Who replaces A-Rod at third?”

We came across this photo of Gibraltar Airport (thanks to Richard Deitsch of SI for the inspiration). That’s pretty intense. Look closely and you’ll see that there’s a road that crosses the runway. You can taxi from your taxi.

Over at ESPNW.com Sarah Spain pens a column about the many excuses males make when dismissing the idea of women as sports analysts. Her list is solid, but for me her opening graf, in which she describes what would seem like a stereotypical dreamy male suitor, contradicts her argument. Exchanging one stereotype for another. Obviously, Sarah (whom I do not know) disagrees and did so on Twitter. You can be the judge. As one of our favorite readers quipped, “The strain of Spain falls mainly on the vain.”

The Heat win their 18th in a row; the Blackhawks lose their second straight.

Mariano Rivera will retire at the end of the 2013 season. In NYC the talk is about how, if Derek Jeter and Mo are not unanimous first-ballot Hall of Famers (no one has ever entered Cooperstown on a unanimous first ballot), then the Baseball Writers Association of America are the hoary trolls that we have always suspected them to be.

So now Oscar Pistorius’ attorneys, while arguing that he is not a flight risk, are appealing the bail condtion that mandates he be prohibited from taking flights. Also, they are appealing the alcohol ban while arguing that he has no intention of imbibing spirits. And remember, he shot someone four times because he thought they might be an intruder… who was hiding in the toilet…who apparently never identified themselves and so why wouldn’t you shoot them first?

Once again, a protest post. Saint Mary’s and our favorite scruffy mutt, Matthew Dellavedova, meets top-ranked Gonzaga in the WCC Championship game from Las Vegas at 9 p.m, but it will not be televised (ESPN3 does not equal television). Also, the second- and third-best teams in the NBA, Oklahoma City and San Antonio, meet deep in the heart of Texas but you’ll only see it if you have NBA TV.

“No, you’re a genius because you can’t make a lamp.”

Given all that, I’m recommending “The Breakfast Club”, the best of John Hughes’ films, on AMC at 8 p.m. Eminently quotable (as our friend at ESPN Josh Krulewitz loves to say, “Demented and sad…but social.”) , and I’m serious when I say that Judd Nelson deserved at least a Best Supporting Actor Oscar nomination.