If you are a sports fan –and you probably are if you are reading this — then today is the equivalent of Christmas morning. TOO. MANY. PRESENTS.

Thirty-two games, beginning with No. 14 Valparaiso vs. No. 3 Michigan State at 12:15 p.m. from Auburn Hills. The earliest local start belongs to No. 13 New Mexico State and No. 4 St. Louis, who will tip off at 11:10 a.m. local time from San Jose…. Easiest “upset” picks of today: No. 11 Bucknell and Mike Muscala over No. 6 Butler or No. 12 Oregon, led by 6-7 Iranian native and Rice transfer Arsalan Kazemi, over No. 5 Oklahoma State and freshman stud Marcus Smart. Or is Kazemi’s presence on the Ducks’ roster just a gigantic ruse disguising his real covert mission in the USA, a mission that will only become clear to all of us 30 years from now when Ben Affleck buys the rights to his story? Hmmmm…. 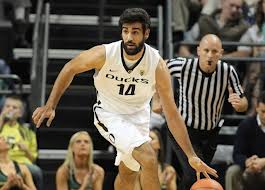 You go your way, and Argo mine? No?

2. Over at Deadspin Drew Magary — who else? — has compiled the Ultimate Curse Word Bracket (don’t hit the link, mom) that is inspired in terms of its seeding. Of the four No. 1 seeds, we’d only supplant one, switching it out with the No. 5 seed in that same regional (you’re smart; you can figure it out). Left out and presumably headed for the NIT of Curse Word Brackets: Rat Bastard. A fun game, if it were possible, would be to cross off every one of these 64 terms once a coach uses one during an NCAA tournament game.

3. Heat Night! (and no matter how far and wide we searched, there was no YouTube video of this tune by The Waitressses. It’s a shame) Down 27 with just over 18 minutes to go in Cleveland — the Cavs kinda blow and were without their three leading scorers, yet somehow had managed to gain a 27-point advantage — the LeBronsters came all the way back. In fact, Miami led by nine with three minutes remaining, meaning a 36-point reversal in about 15 minutes of play. James, who played all 24 minutes of the second half and nearly accumulated a post-halftime triple-double (his overall stats were 25, 12 and 10), exerted his will.  The streak extends to 24. And Cleveland, poor Cleveland, experiences yet another excruciating kick to the (see Nos. 8 and/or 16 in the “Body Regional” bracket from the item above) as far as sports fandom.

Remember Gavin Smith, the handsome Fox movie executive (okay, he was a distributor) who disappeared last May 1st? Smith, a former UCLA basketball player under John Wooden (his son Evan played at USC last year), simply vanished without a trace. Now, finally, LAPD detectives appear to have some solid evidence to lead them to conclude that he was murdered.

5. This list is, well, to use the author’s own name, Gall-ing. I’m not even a Stuart Scott fan, but how do you leave him off the list of the 20 Greatest SportsCenter anchors but include Kevin Frazier? Also, Rich Eisen would be in my Top 10. Way ahead of Dave Revsine. And I agree with Neil “Howzit” Everett: “(He’s) in the top ten, Roger.”

My Top Five: Patrick & Olbermann (it’s a matched set), Kenny Mayne (back when he actually worked for a living), Chris Berman (once upon a time; he was their first huge star, you cannot deny that), Scott Van Pelt, Neil Everett. Eisen as sixth man. Then Linda Cohn.

If you’re keeping score, Kate Upton has a dinner date with Arnold Palmer, 83, (pssst, Kate, order an Arnold Palmer) and has been asked to the prom by a reach-exceeding-grasp high school student. And yet Arash Markazi has her on speed dial. We are not even going to add a photo of Kate Upton in here, which may make us the first sports blog ever to mention Kate Upton without including a photo. Instead, here’s a photo of a hippopotamus. Not that we are making a comparison, because we are not. “Hippopotamus” means “river horse” in ancient Greek. Hippos kill more humans than any other wild creature in Africa. As Les Miles would say, “So you know…”

He was sentenced to write “I Will Not Carry A Prohibited Firearm” 100 times on a chalkboard. Or at least I hope that was the punishment.

Tina Fey checks the “Meet and Be Interviewed by James Lipton” box off her career to-do list. And revives Sarah Palin while doing so.

Speaking of Alaska, it looks as if the Iditarod is setting up for an historic finish! Mush Madness, y’all! And, yes, there are Musher Babes: twin sisters Anna and Kristy Berington.

The Berington twins: To Nome is to love ’em.

What are the odds that CBS invites Ed O’Bannon on to discuss his views of the tournament and the NCAA at large? I could tell you about the day’s most intriguing matchups and players, but CBS “senior blogger” Matt Norlander has done a better job than I could do right here.