1. “LaSalle Shocks K-State” reads the ESPN.com headline. “Harvard Pulls NCAA Tournament Schocker vs. New Mexico” proclaims the USA Today. Gentlemen: There are no unbeatable teams in this tournament. There were five different No. 1-ranked (and as many No 1-rankled) schools this season: Indiana (twice), Duke (twice), Louisville, Michigan and Gonzaga. Miami is arguably better than all of them. 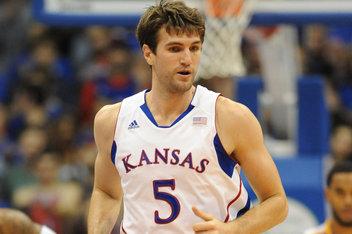 A Notre Dame-Kansas final would provide a “Hail Mary, full of grace/The Lord is Withey” headline

Why was the La Salle win a “shock?” Because the Explorers were a lower seed? Didn’t La Salle defeat one more top ten opponent (Butler) this winter than the Wildcats did? And while I’ll grant you that Harvard over New Mexico was a mild upset, both schools had three losses since New Year’s Eve. If a No. 16 were to defeat a No. 1 — all eyes on you later tonight, Western Kentuckuy — for the first time in NCAA tournament history, I’d grant you the s-verb. Until then, let’s not overhype first-round upsets.

There are no shockers in this tourney. There are Shockers (Wichita State moved on to the Round of 32) and there’s Shaka (Smart, coach of VCU), but no shockers.

Even the pope is canceling his newspaper subscription. The newly elected Pope Francis phoned a Buenos Aires kiosk earlier this week to inform them that he would no longer be needing his daily newspapers (“But what if we offered you the next ten weeks free? And added a Religion section?“)

3. ESPN analyst Jeff Van Gundy says that winning 33 consecutive NBA games is a “bigger accomplishment” than winning the NBA Finals and apparently this is controversial? I understand –and JVG understands — that the goal is to win the Larry O’Brien trophy (now THAT is LOB City), but someone does that by default ever year. No one has won 33 consecutive NBA games in more than 40 years. There’s a reason for that: it’s very difficult to do.

Sure, we could post a Jeff Van Gundy pic here, but this is Julianna Hough. Her boyfriend –Ryan Seacrest — just dumped her.

The Miami Heat are a better squad than both the Boston Celtics and certainly the Cleveland Cadaverliers, and yet trailed the former by 14 and the latter by 27 before winning both games earlier this week. The Denver Nuggets, owners of a 13-game win streak, needed five points in the final 10 seconds to outlast a moribund Philadelphia 76er team playing on the second night of a back-to-back — at altitude — after having lost by 29 one night earlier.

My point? The Heat –and the Nuggets — are going to get their opponents’ A-plus games for as long as their streaks shall survive. That’s why it’s such a tremendous accomplishment (and that is also the hidden cost of creating a college football playoff and eradicating the current system, imperfect as it may be).

4. Yesterday we noted that hippos kill more humans in Africa than any other wild animal. However, we at MH like to consider ourselves a hippo-neutral enterprise. We recognize that while hippos may be deadly, it’s usually only to protect their turf (and since they cannot own guns, what other choice do they have, Mr. LaPierre?). Anyway, we came across this video yesterday and thought we’d present it in the interest of delivering “fair and balanced” hippo content.

To all the hippo-critics out there: shut your yaps.

5. Terrific investigative feature on UCLA prodigy Shabazz Muhammad by Ken Bensinger in the Los Angeles Times. It turns out that Shabazz is actually one year older — 20, not 19 — than listed in the UCLA media guide, but who cares? As for his overbearing dad, Ron Holmes, who are we to judge? And how is Ron Holmes all that different from Earl Woods (father of Tiger) or Richard Williams (dad of Serena and Venus). All three raised children in southern California, all three encouraged –and often pushed — them to succeed in their chosen sports, and two of the three fathers have ridiculously wealthy offspring. Soon, three of them will. We predict Muhammad will score 19 –no, make that 20 — points versus Minnesota tonight

The stories you rarely if ever read about are of the dads who go full-metal Marinovich on their offspring, who either rebel or fall far short of any type of success. But, hey, who doesn’t have an issue with his or her parents at some point in their lives?

Still on the docket for tonight: Notre Dame versus Iowa State, Western Kentucky attempts to become the first-ever No. 16 seed to knock off a No. 1 seed (Kansas… expect to hear the name Ali Faroukhmanesh if it does), and Minnesota takes on UCLA in a battle between schools whose campuses are located in cities that have been home to the Lakers.