1. Sweet 16: The Iranian, the Maxim Cover Model, and Some Dude Named Cleanthony

You want colorful? Oregon, a 12-seed that everyone, before the tourney began, decried was the most egregious mistake the selection committee made, advances while being led by a native of Iran, Arsalan Kazemi. A transfer from Rice, Kazemi grabbed 33 rebounds this past weekend. What does Oregon know about advancing in the NCAA tourney? Well, the Ducks won the inaugural tournament back in 1939, but other than that… Then there’s Florida Gulf Coast University, located in Dunk City, Fla. Not only are the Eagles the first No. 15 seed to advance to the Sweet 16, but they are just one of seven schools this weekend that won both games by at least 10 points. This was no accident. The particulars you need to know:

3. Coach Andy Enfield shot 92.5% from the free throw line as a player at Johns Hopkins (he holds the NCAA record for FT accuracy), earned his MBA, made a fortune with a computer software company, and then took a Maxim cover model, Amanda Marcum, out on a first date that included an NIT game and a trip to Taco Bell. In Queens (or so I’ve read). And she married him.

Finally, there’s Wichita State, which knocked off No. 1 seed Gonzaga. They are the Shockers, but let’s not call their victory a shocker. Please. Cleanthony Early, coming off the bench in both games, scored 37 points for Wichita State (Kansas has two teams in the Sweet 16; Florida has three) over the weekend. We desperately hope that Cleanthony has an evil twin named Dirtyrone.

If you channel-surfed away from the March Madness blowouts on Friday night and happened upon ESPN, you came upon the surreal scene of a World Cup qualifier (Costa Rica vs. USA from Denver) being played in an epic blizzard. While the Costa Rican soccer federation is protesting the game — Team USA won 1-0, after having lost last month in Costa Rica — this story by The Daily Mail illustrates that soccer has been played in similarly snowy conditions over the decades.

Minnesota has produced the likes of Jane Russell, Cheryl Tiegs, Jessicas Biel and Lange, and Loni Anderson. Add the University of Minnesota women’s hockey team to that august list, as the Golden Gophers defeated Boston University 6-3 in the NCAA championship game to consummate their sport’s first perfect season. The GGs went 41-0 to win their second consecutive NCAA championship while extending their winning streak to 49 games.

Amanda Kessel, the top player in women’s collegiate hockey (whose brother, Phil, plays for the Maple Leafs), scored 2 goals in the final.

4. This family from Overland Park, Kansas, really does not want to hear you whine about your harrowing airport experience.

5. This is Kyle Dake. On Friday evening the Cornell senior became the first wrestler in NCAA history to win four national championships in four different weight classes: 141 pounds as a freshman, 149 as a sophomore, 157 as a junior and 165 as a senior. He had to defeat defending NCAA champ David Taylor of Penn State in the final, a match so anticipated that event organizers rearranged the schedule so that it would be the final bout of the night. Dake finishes his collegiate career with a 132-4 record. Now it’s on to Brazil in 2016.

Fron the “Wooden You Know It?” Files: Saturday evening: Sources report that UCLA coach Ben Howland has been fired. Later that evening, UCLA issues a press release saying that Howland has not been fired. Sunday: the Bruins fire Howland.

Were this anyone else in the world of sport, you might be surprised. But it was Sergio Garcia, so you were not. Birdies don’t exist in these kinds of trees. 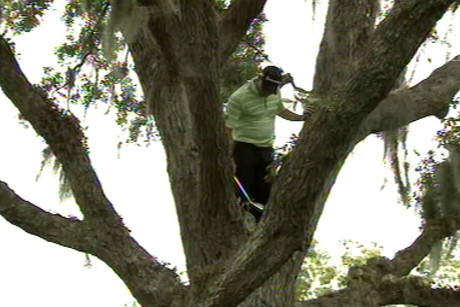 Anderson D. Cooper (“Danger is my middle name”) goes diving with Nile crocodiles on “60 Minutes.” Of course he does.

Cooper: “To be honest, the line outside the men’s room at Splash in Chelsea is more harrowing.”

As many of you know, I’ve been on the Nate Reuss bandwagon since seeing his former band, The Format, open for All-American Rejects back in 2006 (don’t hate me; I took my two nieces to the show).  When I first visited the steakateria to discuss working there, he happened to be sitting next to me at the bar and we struck up a conversation (just two Arizona natives hanging out in the Big Apple). Anyway, this is my favorite song from his breakthrough album with fun.. (Do I write “fun..” at the end of the sentence or is it just “fun.”? Help me, Joseph Erwin).

Jay Leno keeps poking the bear. After all that he’s done (ask Messrs. Letterman and O’Brien), the funniest part of all this is that he’s auditioning for the role of sympathetic figure.

The Heat have won 26 in a row. The Nuggets have won 15 in a row. Both play tonight, in the southeast. They don’t play one another the rest of the season.

Someone in New Jersey purchased the sole winning ticket for the $338 million Powerball lottery. And if history is any guide, their life is about to be pure misery.

After four days/nights of gorging yourself on NCAA hoops? Go to the gym tonight.