1. Hurricane Isaac, or as we prefer to call him, “HI”, strikes Gulf coast: an act of God toward the GOP convention, or a guerilla marketing ploy for “Beasts of the Southern Wild?” (We know he may be just a Tropical Storm to you)

2. After more than 13 months, 24 winless starts, and a two-hour, 23-minute rain delay before yesterday’s first pitch,  Chicago Cubs pitcher Chris Volstad gets his first win since July 10, 2011 — and it’s a shutout.

3. The Newsroom season finale blockbuster: a Northwestern alum gets an internship at a cable news outlet. Whoooaaa!

5. Seahawks name 3rd-round pick Russell Wilson starting quarterback. The Wisconsin product  is the first quarterback named after two athletic gear companies to be a starter in the NFL since Spalding Champion in the late 1970s. (Don’t Google that).

Dieter Strack, a 74 year-old German sports official, was struck in the throat and killed by a javelin during a youth meet in Dusseldorf.

“What rhymes with ‘hospital’?” A musical question raised by Flight of the Conchords (song starts around 10:25). 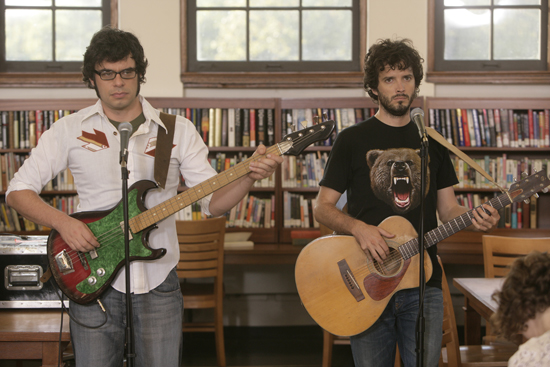 Break up the Franciscan Friars! The San Diego Padres did not acquire half the Red Sox or a three-time National League MVP, but they have won seven in a row.

On Today: “You’re out to dinner with friends and announced you’ve changed your diet and don’t want the fried appetizer. Your friends tell you that you’re no fun any more. What do you do?” Answers: 1. Order a third Scotch 2. Get new friends. 3. Say (if all of you are female), “Fried appetizers are why you’re still single.”

A bear in Denali National Park did what bears do. Half a world away, German film maker Werner Herzog sits up in his chair and wonders, “Sequel?”

Then again, when Isaac makes land fall it will have one more touchdown than the Jets this August.

Last week Notre Dame lost cornerback Lo Wood to a ruptured Achilles tendon and this week it has lost Cierre Wood to VoTR. The Fighting Irish, who peddle “The Shirt” each year for students to wear to games (proceeds go to charity), may want to alter its slogan to “We Got No Wood.”

More Today: Natalie Morales announces celebrity births during her news cast in this order: 1. Snooki and 2. Anna Faris. (this site endeavors to be a Snooki-free zone).

We like how The Big Lead posts a photo of a femme fatale each day, but then it occurred to us, Why must it be an actress/celebrity/model of current stature? After all, your chances of ever having a relationship with more than her photo are almost non-existent (unless John Mayer is reading this site). So we’ll jump across eras when we choose to flash a babe pic. First up, an Oscar-nominated vixen who did cold like nobody’s business…

What is the crueler nickname to dub the Jets: Jest or Mets?

More on Cubs pitcher Chris Volstad: 1. He stands six-foot-eight and 2. In his previous 13 starts for the Cubs this season, he had received one or fewer runs in support eight times. The Cubs had never scored more than three runs for him before yesterday.

USC punter Kyle Negrete, who as a walk-on in 2011 pinned nearly half (19 of 39) his punts below the 20-yard line and did not kick a single touchback, was granted a scholarship yesterday. With an offense that includes quarterback Matt Barkley, Marqise Lee and Robert Woods at wide receiver, and Silas Redd at running back, Negrete should not be very busy this autumn.

Four days have passed since Paul Campos accused, on Salon.com, author Joe Posnanski of committing “a minor literary crime” with his biography of Joe Paterno without any Salon editor noticing — or at least not fixing — Campos’ minor literary crime of misspelling “Salvador Dali” as  Salvador Dail in the opening sentence.

The lead story on ESPN.com’s football page is on an unranked team with a quarterback who has never played a down of college football. Will someone please alert Rick Reilly to this travesty?