Medium Happy’s own Chris Corbellini, a film geek and a former producer on HBO’s “Hard Knocks”, sometimes graces us with his thoughts on films. Here’s his review of “42”, the Jackie., Robinson biopic.

Watch enough DVD commentaries of films that involve touchy and historical subject matter and you pick up how sly a director can be when the studios come sniffing around the edit bay looking to make changes so the movie becomes more palatable for mass consumption. In some cases a filmmaker will plop in an over-the-top scene as a sacrificial lamb – executives will feel they’ve done their duty by removing it – to save another moment they really want in the picture. That practice occurred to me as I watched actor Chadwick Boseman channel a seething, raw Jackie Robinson in a dugout tunnel after absorbing racist taunts in the baseball biopic “42.” It may not have happened, but it occurred to me. 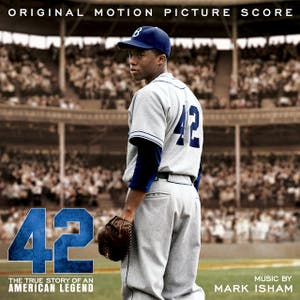 You do have to see it to fully appreciate its weight, but the title character howls like a wounded beast and turns his bat into kindling against a wall, and when supportive, grandfatherly Brooklyn Dodgers man Branch Rickey approaches, Boseman as Robinson hisses at him: “I swear if another white man opens his mouth I’ll …” before the elder figure urges him back into the light – literally up the steps into the sunshine of Ebbets Field and, of course, baseball immortality. There were two masters this flick needed to serve before release – marketing executives armed  to the bow ties with focus-group notes, and Major League Baseball itself. It’s not difficult to imagine someone from either camp suggesting the scene be softened and re-cut to only show Rickey consoling him (played by screen icon Harrison Ford with tumbleweed eyebrows, his best moment of the picture) before Robinson steeled himself. But I’m sure writer-director Brian Helgeland was willing to do battle by any means necessary to keep the one take where his chief character went low and stayed there. The entire take. Even if it meant a take had to go from someplace else .

It’s a small victory of real feelings. Because we are not, absolutely not, under any circumstances NOPE NO WAY NO HOW, getting a complicated movie on Jackie Robinson for mass consumption. You’re not getting a complicated portrait of Hank Aaron and his slow, scary trot through hillbilly-boy-hate-mail-ville as he chased Babe Ruth’s all-time home run record, either. Not unless you want baseball to back out. The Show trades on nostalgia more than any other American sport, and number 42 has been retired forever. You don’t pitch inside on the legacy of a baseball iconoclast, even if the story demands you plunk the man over and over at the plate. The legend should be up there on the silver screen with a syrupy score. The human being? That’s debatable. A director has got to squeeze it through the cracks when he can. 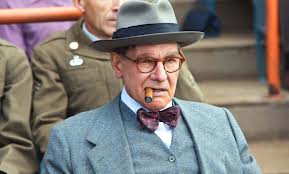 With those parameters in place — Scotch on-the-rocks storytelling instead of neat from the bottle — “42” was the best version of itself it could be. It’s a two-and-three-quarters-star movie that projects Robinson’s nobility in every frame. After the age-appropriate opening narration and based on a true story title card, the talented ballplayer is hand-picked by Rickey from the Negro Leagues to be the first to integrate baseball because he can handle the inevitable poop storm that follows. Once the Dodgers man utters the line (retort really) “I’m looking for a ballplayer with guts enough to NOT fight back,” Robinson does exactly that in spring training, the minor leagues, and finally in Brooklyn during his Rookie of the Year season. The one bit of soul-stirring imagery plays out exactly when it should: following a climactic home run as #42 is rounding third in slow-motion, the pennant in hand as a Rockwellian coach waves him home. It’s intercut with his beaming wife Rachel and his baby son in a carriage on a Brooklyn sidewalk as an entire neighborhood celebrates. And it’s just beautiful to look at. No other adjective for it.

That snapshot aside, I thought the casting department did the finest job of the entire production, giving the main character all dem racist-looking racists he needed to overcome. How exactly do you start to find extras who can play appropriately ass-backward and ignorant? Yet there they were – boozy residents of Sanford, and a nightstick-wielding cop – resembling chain-gang guards from “Cool Hand Luke” or real-life versions of Cletus the Slack-Jawed Yokel. There’s a heaping helping of southern inhospitality going on here, so much so they used one to go against type and provide a little balance, approaching Robinson and his wife menacingly before saying, and I’m paraphrasing: “If you deserve it, more power to you.” Smarmy-looking performers filled out the disapproving teammate roles. Character man Alan Tudyk played the most despicable figure of all – the n-word spewing Philadelphia manager, Ben Chapman, who pushed Robinson to the precipice.

Then there are the Robinsons. Boseman looks like a rookie cornerback in the NFL (that’s about right, Robinson was 5-foot-11 and 195 pounds of lean and mean at that age), and in that one moment the script allowed him to emote something beyond a brave heart, he smashed the scene to splinters. With a haircut styled to a point on his forehead, there’s no denying his resemblance to Jackie. The same goes for the actress who plays his wife Rachel, Nicole Beharie, who didn’t have much to do except smile or fret in the stands. I wondered, wasn’t the stress involved so great that a fight at home becomes inevitable? Or must every sports hero look out longingly at the New York City skyline at night, followed in a few beats by the love interest, who gently hugs him from behind with total understanding?

Obviously this is a period piece, so you expect a timeless quality to it. Still, I’m guessing some of the CGI stuff involved here will look dated in about 10 years. The panoramic shots of Ebbets Field and the spring training diamond in Panama (with a tanker cruising through the canal off in the distance) looked a little hazy around the edges. A ballpark that seats at least 50,000, which by the way no longer exists, is obviously is a great challenge to recreate no matter the budget. So they hoped for the best from their computer folks (and it’s fine by today’s standards), and cut to closeups of the supporting characters in the seats with about 50-60 people around them. But consider the final possession of a truly timeless sports film “Hoosiers,” when Jimmy gets the ball and looks over at Gene Hackman (“Take your time! Take your time!”) before his final, fateful jump shot. Behind them are hundreds of extras the movie-makers went to great lengths to find, real flesh-and-blood extras dressed like they belong at a 1950s dance, and it’s an electric atmosphere. You can’t fake that, and I wondered if the talents behind “42” could have rounded up thousands of extras for that final at-bat, and let the crowd shake it up and take us back to September of 1947.

A ground-breaking time, a somewhat-scrubbed story. Maybe baseball will allow Ron Shelton to produce a motion picture about a great like Pete Rose that has humor and real anger and real f-ck-ups and yes, real joy behind it. Maybe Spike Lee gets a shot at Aaron’s pursuit of Ruth. Until then, we have Wynona Carr’s heavenly “Life is a Ballgame” warbling during the final frames of “42,” a montage when the players are actually enjoying the great, goofy game. We don’t get to see the sunny side of Jackie Robinson here, he was too busy and exhausted being so important to everyone else. If that’s the true Jackie, Jackie the guy not the legendary figure, boy, did he get the shaft once again. It must be hard looking at yourself being looked at all the time.