— Former Washington Wizard and 12-year NBA veteran Jason Collins, 34, becomes the first athlete in one of the three (sorry, hockey) major American sports to openly profess his homosexuality. So, if you had Robin Lopez, Brook Lopez or Jarron Collins in the “Which Seven-Footer Who Attended Stanford and Has A Twin Brother Will Be the First to Profess that He is Homosexual” pool, you lose.

Brittney Griner came out a week or two ago and was Soup Nazi’d by SI: “No Cover for You!”

— Fortunately, we live in an era in which most fans and media (most, not all) absorbed the new with a shrug of the shoulders and a, “So, the Jets cut Tebow?” For those of us who have close friends who are homosexual, there is no scarlet letter associated with being gay (and if there were, I don’t know if it would be an “H” or a “G” or an “L”). Truth: In my first year in NYC, both of my male roommates would come out of the closet; hey, I have that affect on men. Anyway…).

— The author of the piece is Franz Lidz, who is one of the true all-time characters in the history of SI writers. In the 1990s Franz and Steve Rushin would team up to write Sunday Styles pieces for the New York Times in which they’d attempt to outpun one another. This particular piece, which looking back was likely the inspiration for the Appellation Trail that appears at the top of this blog, is pure pun-ishment and a lesson in the old adage, “If you’re going to step over the line, you may as well take a Beamonesque leap.” It includes the line, “This puzzling film is a sort of Rubik’s Kubrick in which Kubrick’s Rubric is Confuse the Viewer.”

— 2013 has been sort of a Coming Out party, no? Earlier this year sports columnist Chuck Culpepper ventured outside the closet. Earlier this month Brittney Griner did so as well. Now Collins. Who will be the first SportsCenter anchor to do so? The first NFL player? The first NASCAR driver? And maybe that’s the point. If so many people do happen to be gay, could it be that maybe homosexuality is NOT unnatural? Or at least no more unnatural than monogamy, which seems to take a hit with every new issue of US Weekly (which is not to be confused with Boo Weekley)? I’m just asking…

— Kudos to SI, which has been on a hot streak with its covers ever since posing Bryce Harper on the Capitol mall in Washington, D.C. The Tiger Woods cover was a classic, as was the cover from the Boston Marathon. Even last week’s Kevin Durant cover, which accentuated the fact that, no thank you, Joe Jackson, he does not want to be your number two, was effective. And now this.

(by the way, I really miss the work of Joe Jackson. “It’s Different For Girls”  appears on his Live album in three different versions –acoustic, a cappella and original recipe — and each version is better than the other. The years have not upheld the legacy that JJ deserves, IMO).

2. This Dove ad. Simple. Effective. And goosebumpy. “In all things, the supreme excellence is simplicity,” said Henry Wadsworth Longfellow, whose name was not. Still, this ad illustrates that adage to perfection.

3. Comedian/social observer Jerry Seinfeld turns 59 and celebrates his birthday with the obligatory “star-studded bash” at an Italian restaurant. We diehard acolytes of his sitcom knew that he would not celebrate at a Chinese restaurant or Mendy’s or a soup stand. And, though we hoped he’d dine at Elaine’s, that bistro went out of business recently. All that’s left to wonder is whether Kenny Bania snared an invite.

4. Flori-Duh: Thanks to Andy Staples, a Sunshine State native and proud resident, for posting this link on Twitter. You’ve got public nakedness and gibberish, which are like two of the dozen holy tenets of any Florida-based story worthy of this segment (others include “stripper”, “alligator”, “domestic dispute”, etc.).

5. So, yes, the New York Jets released (and never has that verb been more pregnant with all of its implications) Tim Tebow. On the same day that Jason Collins revealed that he was gay and ESPN’s Chris Broussard stated on national television that to “live an openly homosexual lifestyle or an openly premarital sex between heterosexuals” is “walking in open rebellion to God and Jesus Christ.” It’s funny, isn’t it, how little you ever hear Tebow, the most publicly devout Christian in pro sports –if not in all of American public life — judging others in any way, shape or form? For me, that is the MOST Christian thing about Tebow. As for Broussard, he appeared on “Outside the Lines” with LZ Granderson, an openly gay columnist, who noted that “I would love to not have premarital sex, but in this country I’m not allowed to get married.”

The Passion of the Tebow: Stay tuned for further developments.

Game of Thrones: I’ll spare you an exhaustive recap (here’s one you may read) and leave you with a few observations, such as this line from Lady Olenna (Dame Diana Rigg), who asks the Master of Coin, our erstwhile flirty and Falstaffian friend Tyrion Lannister, “What good is the word ‘extravagant’ if it can’t be used to describe a royal wedding?” Myself, I often describe non-lavish affairs simply as “vaganzas”… also, I’m sure Chris Broussard and I were not the only two who got the baptismal symbolism going on in the scene with Kingslayer and Lady Brienne… By the way, Lady Brienne: As my friend Jeff Bradley would say, “That was full back-al nudity”…. By the way, how many bare asses appeared in this episode? My count is four….My mom reads this blog, so I will have nothing to say about Jon Snow… So Robb Stark cut off someone else’s head to spite himself?… I was hoping when Danys told Grey Worm that he could choose a new name that he would choose “Kunta Kinte.” (If you don’t get that, you’re probably under 40 years old)… I’m fairly bored with the Stannis story line. You?… Don’t you hate it when your dad orders you to marry someone?

How do you turn on the jets in this hot tub?

Sacramento keeps the Kings, while Seattle has its leash yanked yet again by the NBA. If this list is to be believed, the Seattle metropolitan area is larger than NINE other U.S. metropolitan areas in the Top 30 alone that also have NBA franchises. Toss in the fact that Seattle is the only NBA market since 1959 to have lost an NBA franchise that won an NBA championship, and I’d say the land of Kurt Cobain and Frasier Crane has a legitimate gripe. I’ll be over at the Café Nervosa with Niles mulling this fact all day. The Emerald City remains an NBA pariah, while Orlando, Charlotte, Memphis and New Orleans all have teams.

One of the true legends of country music –some would say THE patriarch of the genre –died over the weekend. George Jones. I don’t profess to be an expert on the man or his music, but even I’m a fan of this classic. FYI: Carlos Santana is leading the Major Leagues in batting with a .386 average. Oye como va!

Will the most entertaining first-round series end tonight in the Mile High City? Or can the Nuggets, trailing three games to one, force Game 6? The Warriors were 3-18 without All-Star forward David Lee during the regular season since Lee had joined the team, but they are now 3-0 without him (hip flexor; out for rest of playoffs) in the past week. We love George Karl and the Manimal, Kenneth Faried, but we salivate at the prospect of a Spurs-Warriors series in the second round. That series would include key players from four different continents (Australia, North America, South America and Europe). 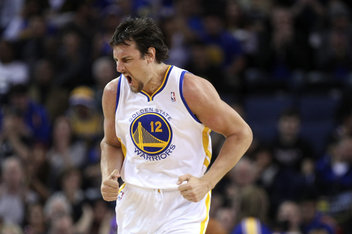