Our Chris Corbellini is a cross between Roger Ebert and Bobby Hebert: His love of cinema is only matched by his ardor for the NFL. Here is his review of the Ryan Gosling/Bradley Cooper vehicle in which the two men share all of one scene together — and barely that.

There’s a line of thinking in film that if you have two characters standing with their flags firmly planted on polar ends of the story — good versus corrupt, corrupt versus worse, prom queen versus band geek, Christopher Walken vs. Dennis Hopper – then these two principals must meet someplace.  Maybe a diner. Or a World War I trench. Or a raised ranch home on a leafy street. From the initial point of contact you wonder: What are they going to finally DO to each other? What happens after? The makers of “The Place Beyond the Pines” embrace that line of thinking, and that embrace holds and holds, tighter and tighter, until the movie runs out of breath. 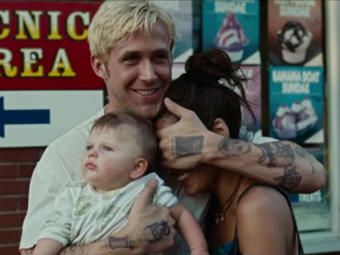 Too much. Too much epilogue. Check your watch too much. “Pines” weaves two mood pieces together confidently and boldly, and then wants you to hang in there for thirds. It kick-starts with Ryan Gosling, and he toys with the first-half of the movie like the switchblade in his fingers in the opening scene. It finishes with Bradley Cooper in a moment of triumph and competing for an ending with another generation entirely.

Still, watching two well-made films unspool for the price of one ticket is not a bad thing, especially since the director, Derek Cianfrance, and his writers clearly adore other well-made films. Pop culture references and movie homages slip out from time to time, and an argument can be made that Gosling’s Handsome Luke is a stand-in for Steve McQueen from “The Great Escape.” On the bike, life is one big wheelie no matter how grim the setting. Off the bike life becomes complicated, but instinct still drives. At one point I wondered if the movie was going to have Gosling bounce a tennis ball off something until he formulates a plan, just like McQueen did in “Escape”… and then he literally did so.

The flick also boasts an impressive, Goodfellas-esque tracking shot of Handsome Luke – sinewy with body art like a ransom note of words cut out of magazines – weaving his way through the blinking lights of a carnival before he rides his motorcycle in, around and up a metal ball of death. Afterward he spots the Eva Mendes character, easily the prettiest waitress in all of Schenectady N.Y. (the diner she works in would have been a lot busier than this movie suggests), and judging by the body language alone there’s a lot of history between them. Body language that leads to having a kid. Once Luke sees his infant son, he decides his world-class riding skills would be useful to rob banks. As a result of his actions, Mendes comes face to ugly mug with an actual actor from “Goodfellas,” Ray Liotta, who enters the second act like a spitting cobra, and Cooper.

Cooper and Gosling do indeed meet as well, and it is not for me to say what happens. I’ll only mention that I went to see the movie twice to confirm the sequence of events. It’s a credit to the filmmaker’s shot selection and his sound editors that the viewer really doesn’t know one of the biggest movie stars on the planet is actually involved in a high-speed pursuit until the high-speed portion of the pursuit is over.  There’s a genuine “oh sh-t, it’s him. I was wondering where he was” moment.

The movie then … tips.

Taken as a whole “Pines” has something to say about the lower and upper classes of small-town America. Cooper is a cop with the Triple Crown of rich kid entitlements: Smarts, a law degree, and a daddy with a lot of political pull.  Over a stiff drink in the family dining room the father says “there’s a way out of this,” and that’s exactly how it plays out. It should have ended how it played out. The third act involves the fateful meeting of the sons, and there are no teenage actors alive that can yank this slow-burn story away from the two male leads and bring it to the finish line in a satisfying way – even if guns, drugs and a sweet-looking motorcycle is involved.

You can see the talent behind the camera. Gosling and Cooper are entering the primes of their careers and well-known character actors fill out the lineup card, so the director is on the rise in his industry. Perhaps the best endorsement of Cianfrance’s work here comes from a performer on the soundtrack – Bruce Springsteen. The Boss loaned out “Dancing in the Dark” for one sequence – a rare moment of levity in a tale of dark places. The Jersey legend once loaned out a song to a production I was involved in with one caveat: he must see and approve how the picture is edited to his music exactly. I was told he does that with each film he considers. Springsteen must have enjoyed the sliver he saw in this case. No surprise. There’s a lot to like here. It just kept going, so sure you’d stick around, and it wore me out.