Deja vu for the cities of Boston and New York?

Boston and then infamously squander it. No NBA team has ever rebounded from a 3-0 deficit to win a series. I remember reading a similar stat in baseball nine years ago.

2. Sportsgrid managing editor Eric Goldschein pens an insightful, intelligent essay on Chris Broussard’s “right to be an idiot.” Oh, and in case you were wondering, Broussard is married to a gastroenterologist. 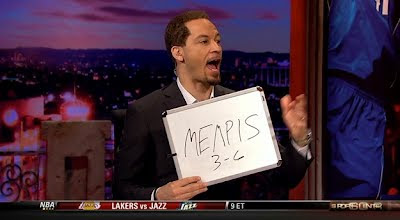 To be fair, I once won a game of hangman because I spelled “rhythm” with 2 “y’s” and insisted I was correct.

3. Three friends of Dzhokhar Tsarnaev may have taken loyalty to a criminal level. A federal affidavit alleges that they removed a backpack with empty fireworks cases from his dorm room because “they did not want Tsarnaev to get into trouble.” Do they realize he didn’t tee-pee the U Mass-Dartmouth quad here? That this act killed three people and maimed dozens more? 4. “And They’re Off…Watching the Most Exciting Two Minutes on Sports on TV”

Saturday’s Kentucky Derby will have no press box, as Churchill Downs has completely eliminated it for this year’s race and — you guessed it — transformed the area into luxury boxes for the well-heeled. Oh, and I hear that the horses are not giving interviews, either.

5. And then the situation…elevated
The world’s highest-altitude fracas ever may have taken place last Saturday at 23,000 feet, as Sherpas and European climbers engaged in a battle while scaling Mount Everest. According to the Sherpas — and who wouldn’t believe a Sherpa? — the Euros recklessly climbed past them and dislodged ice chunks that fell in their direction. The Sherpas then allegedly told the climbers that if they were not gone in one hour “they would all be killed.” From there it was literally a slippery slope before the situation devolved into fisticuffs. By Tuesday both sides had calmed down and even written a peace treaty to one another. I can only guess that they are all now relaxing and perhaps even sharing a beer back at The Abominable Snowmansion.