“Chaos is not a pit; chaos is a ladder” — Littlefinger, a.k.a. Lord Baelish, to Varys, in “Game of Thrones” 1. Oh, he is cunning, that Littlefinger. He is full of cun. In the latest episode of “Game of Thrones”, Lord Baelish gives Varys a tutorial on how to make a power-play when one does not actually possess power. Meanwhile, a dwarf is being paired with a teenage orphan while an incestuous queen is due to be betrothed to a “sword swallower, through and through.” Is this King’s Landing or Knot’s Landing? 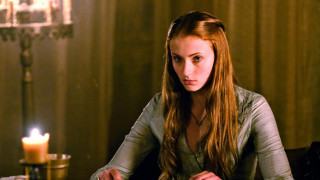 Sansa and Theon would make a great couple, no? Sure, they’re step-siblings, but since when has that ever stopped love in Westeros?

2) It was funny to listen to Tywin Lannister and Lady Olenna negotiate the marriages between their children while using their sexual pecaddillos as trump cards. Were you like me? Were you thinking, Okay, you may be post-menopausal, Lady Olenna, and you may have a little difficulty with your sword these days, Tywin, but it is you two kids who should be wed just so that you’ll have someone to hit the early-bird specials with at the King’s Landing Denny’s.

2. Mayweather Report
May weather at Churchill Downs Saturday: soggy. Mayweather in Las Vegas on Saturday night: once again, insuperable. In Louisville the pre-race favorite, Orb (as our faithful friend, An Inconvenient Ruth, noted, “He must have a dyslexic twin named ‘Bro'”), won a rain-saturated Kentucky Derby, the 139 edition, on Saturday afternoon. Was his father a mudder? Was his mother a mudder?

Horse racing: where gambling is suddenly not taboo.

Later that evening at the MGM Grand in Las Vegas, Floyd Mayweather, who works as many days out of the year as Santa Claus, dominated Robert Guerrero in a 12-round decision to move his career record to 44 wins, 0 losses. After the exhibition Mayweather, who was wearing a baseball cap, praised Guerrero’s effort and said, “I take my hat off to him.” Although he actually did not doff his cap.

Floyd’s cap reads “The Money Team.” The ring is his ATM.

Before Orb was making hay and Floyd was throwing haymakers on Saturday, we were shouting, “Hey, Bale!” at the TV as Tottenham Hotspur were battling Southampton on the pitch. The match was scoreless in the 86th minute when Gareth Bale, who by the time the World Cup rolls around next year in Brazil will probably be recognized as the world’s greatest player, slammed home a screamer from just outside the penalty box. The Welshman has the rugged good looks and the powerful leg of a man who, in a previous era, would already be dating a Spice Girl or three. Tottenham, which is currently in fourth place in the EPL (a Top Four spot ensures qualification for the next season’s UEFA Champions League), meets fellow Top-Four club Chelsea on Wednesday. Stay tuned…

His winning strike: The jury is not out on Bale.

(I just realized that this entire post, to this point, could have been written by Adam Duerson. All it needs is a mention of RAGBRAI and a competitive-eating contest).

4. A “New Rules” closing rant in which Bill Maher declares that we are not fighting a War On Terror, but rather a “War Against Losers.” When you think about it, the Shoe bomber failed to light his show, the underwear bomber succeeded only in lighting his genitals, and the Times Square Bomber locked himself out of his vehicle. And the Tsarnaev brothers never had a getaway plan, much less an idea that, you know, chances are there might be a few video surveillance cameras on Boylston Street. Not to diminish the deaths or maimings of anyone in Boston – a homicide is a homicide is a homicide –but Adam Lanza killed more Americans than all of the aforementioned “enemy combatants” combined. In fact, more NATO servicemen (seven) died in Afghanistan on Saturday.

One more question: Why do news sites show photos of Dzhokhar that make him look like a sweet-eyed stoner as opposed to a mug shot? Is there a mug shot? Why haven’t we seen it? Meanwhile, Boston affiliate WCVB had a really cool idea: a photo gallery of the victims.

5. Finally, a marriage that Don Draper can live with.
SCDP weds CGC and, yes, I noticed that this was the second time this season that Don Draper took up residence at a hotel bar alone at night, was happened upon not be a leggy female but instead by a man, and then found himself as part of a wedding party the following morning. 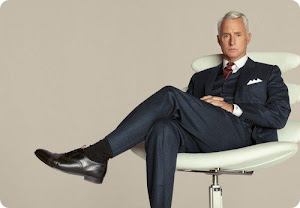 Suddenly things are looking brighter for Don –and maybe even Peggy –but beware the blooms of May, 1968. Robert Kennedy’s assassination is probably going to be a focal point of the next episode and with his death comes a pall that will hang over America until either Ronald Reagan is elected (1980) or the Starland Vocal Band releases “Afternoon Delight.” (1976). I’ll allow you to be the judge.

P.S. My guess is that the Chevy is either a Chevelle or a new-model Corvette.

Shortened post, as the steakateria beckons. My apologies. As always the Medium Happy Tip Jar accepting doughnations on PayPal at sameriver@hotmail.com. Thank you!