So let’s scan the bottom line first. Look at all that ridiculous money Iron Man 3 has made so far: $175.3 million in its opening weekend alone. Domestic. That’s an A-Rod contract. This not-quite-summer hit is a lighthouse for the lost-at-sea dreams of wannabe screenwriters everywhere. Go west, young men and women of letters, and claim a fortune in the business, just like Shane Black. The newest Iron Man director made his Malibu mansion dinero by adhering to the staples of old-school action movie writing: a confessional beside a friend in the critical care ward of a hospital, a threat from the hero to a few goons as he strapped to a metal-wiring-type torture device (bonus points if electricity surges through it), and of course the half-scared, witty banter between buddies as they duck behind a cast-iron blockade or rock outcropping while pinned down by bandits.

I’m not pointing out the checklist to criticize it. Somebody talented has got to do it. Snap-crackle-pop is harder to write than to speak, and when it’s good it’s really good. William Goldman won an Oscar when Butch Cassidy and Sundance were trapped in Bolivia and, with no chance of escape, debated the merits of taking their talents to Australia.  In the 1980s Black’s heroes from the “Lethal Weapon” movies, cops Riggs and Murtaugh, decided they will launch a counter-offensive against the baddies on three … but was it 1-2-3 and then go, or 1-2-threeeeeee? Flip forward to May 2013, and Robert Downey Jr. and Don Cheadle are kneeling behind something on a ship as enemy bullets are pinging off metal, and I wondered if that question would be raised again. It wasn’t but what the director came up with was still funny. There are tweaks here and there to the genre and an enjoyable twist in Act 2, and they are welcome because he didn’t need to do so. The casting and the go-go gadgets were going to be 80 percent of this picture, no matter what.

Here’s all you need to know about the plot: Tony Stark needs to out-smart some smart-talking bad guys again, in and out of his electric-powered sweat suit that makes him Iron Man. He wears an ID badge in the beginning of the film that says “You know who I am,” and that’s basically the gist from credits to credits. The writer-director slipped in some original bits when he could. 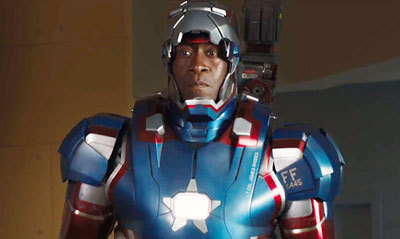 Cheadle: “I’m a long way from the Hotel Rwanda.”

Another new wrinkle: the random, Bond-esque, pony-tailed goons have some fun (they remain terrible shots, however). At one point Stark asks one of them what the distance is between the state of Tennessee and their enemy lair in Florida, and he instantly calculates the mileage before proudly adding “I’m good like that.” The biggest chuckle of the movie came moments later, when a henchman puts up his hands and offers “Honestly? I hate working here. They are SO weird.” Black himself had designs on being an actor (he was the bookish Hawkins in “Predator,” and was slaughtered almost immediately), so perhaps that’s the reason he gave even the small parts scrumptious lines. There is also a helpful kid that follows Stark around (Ty Simpkins) for a stretch of the movie, and he’s allowed to be clever as well.

Not that the leads slack here. Gwyneth Paltrow (ever the Prom Queen), Ben Kingsley (diabolical), Guy Pearce (benches the most weight in the picture), Rebecca Hall (smart, sensible, screwed) and even Paul Bettany, the disembodied voice of Stark’s Jarvis, grip it and rip it when necessary. I thought Cheadle had the least to do. In the third movie it’s tradition for the production to shove 15 pounds of groceries in a 10 pound bag, and something usually falls out. I’m sure Cheadle was OK with it. Another tradition in a third movie, provided your character survives to that point, is an oh-good-lord paycheck.

The creatives put real money into the pretty pictures, too. The two set pieces from the trailer – the Stark Estate attack and the Air Force One rescue – are obviously well-staged and lensed by a true pro, Director of Photography John Toll. Yet before the movie began the latest 3-D trailer for “Man of Steel” unspooled to a rousing score by composer Hans Zimmer, and the mix of imagery and music was so intoxicating I wondered if the makers of Iron Man 3 could have set the effects bar even higher. There were also some continuity issues with the first two Iron Man movies. Tony Stark is supposed to be part Chuck Yeager test pilot, part Walter White science whiz, but human and thus physically vulnerable. Yet in Part 3, Stark makes at least five jumps high atop that ship in the finale, sans suit, that Bob Beamon would not have pulled off in Mexico City.

Bigger picture, I couldn’t miss the similarities between one of the “terrorist” explosions in the film and the footage of the Patriots Day bombings on Boylston Street. An unnerving moment in what is otherwise a fast-moving, amiable story. Maybe it was just me.

The box office tally keeps growing thanks to all of us. Landing Downey for all three flicks was the best casting choice Marvel Studios ever made … he’s a ping-pong ball that rolled off the table, forcing you to give chase down the hallway.  In Goldman’s terrific book “Adventures in the Screen Trade,” he tells a story about a star of Downey’s caliber that has a scene where he must show weakness – calling out to be rescued to a love interest on the beach while drowning off-shore. The performer in question said he’d act it out as written, with one caveat: what if he was in fact a terrific swimmer and in no real danger, but wanted the love interest to FEEL like she was saving him? Let it be known that Downey was not a slave to his ego at the completion of this trilogy. He was having too much fun to care, probably.

Mr. Iron Man must have put a good word in for Black, too, with Marvel. The two worked together on “Kiss Kiss Bang Bang” back in 2005 when the actor was still rehabbing his image and didn’t have the options he has today. Now they might as well be celebrating with fistfuls of moolah atop the Hollywood sign. Iron Man 3 is better than 2 yet not as good as the original, and it doesn’t matter. The global tally may hit $1 billion, giving Black a credit line of at least one studio picture where he and Downey can really rip off some funny stuff together without the requisite super-duper villain to conquer. Perhaps an iron barrier will be involved, though. Bullets can’t hit you while you and your partner are crouched behind one, firing back one-liners.

One thought on “The Film Room: Ironman 3”