1. The Most Dramatic Collapse Since the 2011 Boston Red Sox?

A bridge on Interstate 5 spanning the Skagit River in northwest Washington collapses, purportedly after an 18-wheeler slammed into it. The road is the major artery between Seattle and Vancouver, two cities that used to possess NBA franchises. As dramatic Evergreen State bridge collapses go, though, the 1940 undoing of the Tacoma Narrows Bridge remains unrivaled. And shame on your high school physics teacher if he/she failed to show you this video as an example of the power of a transverse wave. 2. “This is a tornado emergency. You need to be below ground immediately…we are not here to scare you, but this is a very large tornado…”

A news truck from KOCO TV 5 in Oklahoma City captures the first moments of funnel formation with the Moore, Okla., tornado and then the first 10 minutes. Nature’s wonder and nature’s wrath all in one scene. This is mesmerizing.

Profiles in Human Interaction: Monday in Moore, Okla., and…

The first word that comes to mind with the murder of Lee Rigby in mid-afternoon on a London street? Brazen. The second? Calculated. Two hoodlums garnered worldwide attention with a despicable act, landing themselves on the cover of yesterday’s New York Daily News. Say what you want about their cause, about imperialism, etc. but in the 21st century video/photos/social media is a mighty powerful weapon.

4. Can’t you just see the pitch meeting for “The Purge?”  “It’s ‘The Hunger Games’ meets ‘The Strangers’ with a generous dollop of real-life Detroit.”

The Purge: Promises to be a let-down for fans of eating disorder films.

5. Until the Harvard Baseball Team Makes Another Road Trip Mash-Up…

….this video of University of Cincinnati players photo-bombing teammates during post-game interviews is the most significant contribution to college baseball humor for 2013.

The Antidote to Modern Fandom: F.C. United of Manchester

F.C. United’s fans have no Old Trafford of their own (they rent space at different locations), but they don’t care.

“I don’t support their business model. It ignores the fans. And because of that I won’t give them any cash.”

Is this me talking about the New York Yankees? It could be: I haven’t spent a dime on a ticket to the new Yankee Stadium since it opened in 2009 (and I’ll have a story about the egregious Legends Suites seating area out soon in an actual newspaper). But in fact this quote comes from Andy Walsh, the general manager of F.C. United of Manchester, a franchise that was erected on the cornerstone of disenfranchised Manchester United supporters. Man U. are the New York Yankees of European football (soccer). Walsh and other fans finally grew so fed up with Man U.’s arrogance that in 2005 they created their own fan-owned club in which each member gets one vote (“a motion to never sell advertising on the team’s jerseys passed with 96% of the vote,” writes Sam Borden of The New York Times).

The best part, perhaps, is that FC United of Manchester began the 2005-2006 season on the lowest rung of English club football, the 10th division. They have already ascended to the 7th division and narrowly missed an opportunity to move up one more rung on the ladder on May 11 when they lost, 2-1,  in front of 4,412 fans (Do they look as if they care that they’re not part of the Barclays Premier League?) to Hednesford Town in the Northern Premier League playoffs.

This one master stroke, relegation, is what makes English soccer so fascinating. Imagine if the worst team in Major League Baseball (hello, Miami) had to drop down a division while the best team in Triple A was allowed to advance. And if the worst AAA team had to follow suit to AA, and vice versa. And so on. This is reality in English soccer, and it is why a franchise that was literally conceived out of the disenfranchisement of the most powerful club’s fans may potentially play in the same league with that leviathan entity some day.

Leave it to our former “tyrannical” British overlords to teach us Americans a lesson in sports providing a “land of opportunity.” Now please may we have our F.C. United of Manchester kits? And when will the movie be released?

When Tom Petty performs, he gives concert-goers their money’s worth. All this week Gainesville’s Gift to music has been performing at the Beacon Theater, a five-minute walk from here, calling it “heaven on Earth.” David Fricke of Rolling Stone provides a review. 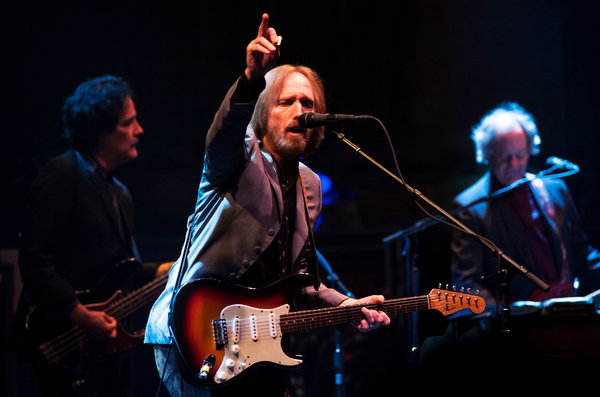