How tricky it must be for a guy like Seth Rogen to play himself when the rest of the movie-watching world thinks it already knows him. When an actor does it right though, exaggerating the worst parts of his public self, it’s always good for a laugh. Rogen is the co-director and writer of the Apocalypse comedy “This is the End,” and with a cast that graduated with dishonors from the School of Apatow, the movie suggests that he and other big-name actors aren’t worthy of ascending to heaven. No, it’s much funnier to see these fools suffer each other at the mouth of hell.

The six leads, Rogen, Jay Baruchel, James Franco, Jonah Hill, Craig Robinson and Danny McBride have all found success on their own in Hollywood. Now, with a credit line to do a project all their own, they’ve put together the funniest movie of the summer so far. It’s drags a bit while the end-of-the-world story plays out in the background, but there’s a lot to chuckle about from credits to credits, which in today’s comedy market is really saying something.

One of the smarter choices the filmmakers made was lingering longer than usual with the set-up: Baruchel flies into Los Angeles to visit Rogen, and while there are smiles, backslaps and a rapid-fire montage of ganja smoking involved, the visitor can barely conceal his disgust with how phony his world-famous buddy has become. This may be rooted in truth, with Baruchel doubling for the co-director Evan Goldberg, who is a childhood friend of Rogen’s. Then again, Baruchel gets recognized himself at a Hollywood party (“Loved you in Million Dollar Baby”), so it might be partly from his point of view as well – a working actor that is not a megastar surrounded on all sides by megastars. The party in question takes place at James Franco’s new mansion in the Hollywood Hills, and it’s the best slice of the picture. 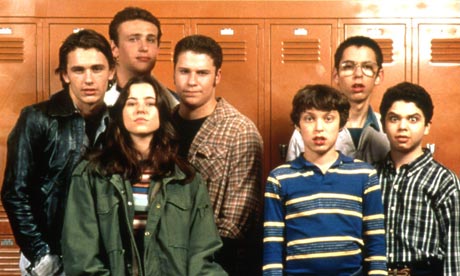 There’s an unspoken rule when invited to nights like these: If you have a choice between checking out a pack of celebrities seated at a table or a pack of matches placed at another table … you stare at the matches. The endgame is if you pretend not to look long enough something interesting will happen, and the Rogen-Goldberg tandem shot the party this way and it’s funny and knowing. Michael Cera, for instance, an actor known for his inherent meekness, is spotted hopped up on cocaine and slapping Rihanna’s butt, and she wheels around and belts him.  My favorite moment, lensed in passing as if you were walking out of a bathroom upstairs, was Jason Segel bitching about the dumb-it-down comedy of his own hit television series, mimicking chubby cheeks and mumbling as if he had eaten his TV wife’s food without permission. These would be the stories you tell friends the following morning. Of course the joke of the movie is you wouldn’t live long enough to see the following morning. Just as Baruchel and Rogen are close to having it out for good, beams of godly light bolt from the sky, and the Apocalypse begins. MH has a soft spot for the almost-famous Baruchel, who first uttered, “It’s All Happening.” He’s sweet in “She’s Out Of My League.”

A good comparison from this point would be “Ghostbusters,” with its combination of how-is-this-happening scares and humor (one of the monsters looks like the ugly dog-creature that attacks Rick Moranis outside Tavern on the Green). But Rogen and Goldberg push it far beyond the silly imagery of a Stay-Puff Marshmallow Man. They instead open up a sinkhole right in front of Franco’s house and drop nearly all of young Hollywood to their deaths.  The Marshmallow Man in this instance is actually a well-endowed demon giant, because what’s worse than feeling inadequate before being swallowed and banished to hell?

The CGI isn’t mind-blowing, and that’s not really the intention. The intention is the hilarious facial reactions to that CGI. It wasn’t enough that these actors were so freaked out by a severed human head that they began squealing in horror. No, the creatives thought it would be even funnier if they captured their horror from the point of view of the HEAD, rolling around like a soccer ball on the floor.  Then, when a exorcism must take place, one of them repeats “The power of Christ compels you!” because that’s the quote they (and the rest of us) remember from “The Exorcist.” This group may not known much about the writings from the Bible, but they do know their movie scenes.

The performers clearly had a blast making this film, you can see it. They must have laughed quite often after someone yelled “cut,” and I look forward to the DVD commentary, when they crack up even more. Rogen doesn’t showcase his famous laugh much in “This is the End,” but you can almost see him bellowing to himself months earlier, as he wrote moments for each of his cast-mates. McBride somehow chews up scenery which involves fire and death, and his moment with the biggest cameo in the movie brings the biggest laugh. Then there’s the finale, with extras and stars alike decked out in white. In the end, sweetness prevails. That may seem like a surprise considering the subject matter, but not to anyone who watched Rogen and many in this cast getting their big break in the Judd Apatow show “Freaks and Geeks.” They are now paying forward that rooted-in-kindness storytelling. The Freaks and Geeks shall inherit the Earth. What’s left of it that hasn’t been stomped on by a demon with his junk dangling out, that is.