1. The 25 first-half points by the Spurs’ Tim Duncan. Vintage Big Fundamental from a decade earlier.

2. The Heat’s Mike Miller not only playing an entire offensive possession in the fourth quarter with only one shoe, but spotting up and burying the three.

3. Kawhi Leonard’s first-half dunk. As one person tweeted, Leonard just fulfilled two of his lifetime objectives: “He dunked and he punched Mike Miller in the face.”

4. The polarizing play of LeBron James. If you love him, you note that the Heat forward had 32 points, 11 rebounds and 10 assists, his second triple-double of the Finals. If you don’t, you remind people that he palms the ball on every one of his patented “set-up-from-30-feet-out-and-then-bullrush-to-the-bucket” maneuvers. If you love him, you remind us that LeBron scored 16 points in the final 12:10 of regulation to lead the Heat back from a 12-point deficit. If you don’t, you note that late in the third, he failed to get a whistle on a driving layup and sat in the lane, his palms held upward, and whined to the referees as the Spurs raced downcourt to score a bucket. It was 60-56 at that point and the Spurs quickly turned it into a 13-point lead. If you love him, you note that LBJ was an absolute beast on defense. If you don’t, you grudgingly accede that point. But you note that LeBron, for as great as he is, plays like a playground chump. The dude who misses his shot and then calls the foul. In overtime he came up with a steal and had Danny Green onein-on-one in the open court. Miami led by just one with :40 to play. LeBron did three things here: 1. He slammed into Green and cleared him out with his left arm, conspicuously 2. Lost the ball out of bounds, again conspicuously, and really through no effort on the part of Green, who was falling to the floor, and 3. reacted by making the face you see below.

5. Tony Parker’s brilliance. TP hit a teardrop three with the Spurs down three and under two minutes to play, then made the spin move “Where Did He Go?” play on Mario Chalmers that led to the go-ahead bucket. If either James or Allen miss their threes, the Spurs have a fifth title and Monsieur Parker is the undisputed NBA Finals MVP.

6. That offensive rebound by Chris Bosh (and yes, it is worth asking why Tim Duncan and his 17 rebounds were not on the floor). Four Spurs defenders were in the area of LeBron’s three-point miss, but the human velociraptor (he really was perfect for that team’s nickname) that is Bosh extended to the heavens to grab the board and kick it out to Allen who…

7…. buried the most clutch three in NBA Finals memory. Yes, John Paxson buried a three that won the 1993 NBA Finals, but the score was tied at that point. Garfield Heard buried a shot to force another overtime in the Phoenix Suns-Boston Celtics three-overtime classic in 1976, but the Suns would ultimately lose the game and the series. Two years earlier Kareem Abdul-Jabbar swished the prettiest baseline sky hook you will ever see to clinch a double OT win against those same Celtics in Game 6 of the Finals, but the Celtics would win Game 7 (in Milwaukee) and then the series. (Watch the final 30 seconds of that contest, by the way–go to 6:00 mark. Note two things: 1) there are three lead changes in the final 30 seconds and 2) pay attention to the dribbling. No one is palming the ball. That makes it more difficult for the ballhandler to change direction. But that’s the way the rules are written. The NBA has lost its way in terms of officiating this, which is why LeBron is as lethal as he is).

8. The KIA NBA Countdown postgame show in which Magic Johnson opined, “I’ll say it –they choked.” The road team was down three in the final two minutes and they choked? Really? Kawhi Leonard only made one of two free throws in the final few seconds with the Spurs up two, but he was only a 63% FT shooter in the playoffs, anyway. He didn’t choke. He simply performed at his expected level. Honestly, Magic’s presence on this show is puzzling. If you are too young to remember him as a player, he was a charismatic leader, an ultimate competitor and, like LeBron, a physical beast as a matchup — a 6-9 point guard was at the time unheard of — who, also like LeBron, whined when things didn’t go his way. And, again like LeBron, had a suspect jump shot. But he was the ultimate leader and a brilliant player. It’s startling how simple-minded he comes off on this show. I’m sure Bill Simmons looks at him before every broadcast and thinks two things: 1) The Ewing Theory would work here and 2) this is the guy who beat my Celtics three out of five times in the Eighties?

9. Heat security attempting to cordon off the court as Tim Duncan was attempting to inbound the ball before San Antonio’s final possession in regulation. As ABC’s Jeff Van Gundy astutely observed, “What are they worried about? Miami fans rushing the court if the Spurs win?”

10. Jesus Shuttleworth’s textbook form on his season-saving jumper from the corner. And the look on Tony Parker’s face as he raced to guard him. Freeze-frame moment in NBA history.

The Buzzfeed reporter, whose 2010 expose on four-star general Stanley McChrystal, then the joint commander of U.S. and NATO forces in Afghanistan, in Rolling Stone, led to McChrsytal’s resignation, is dead. Hastings, 33, perished in a high-speed, single-car accident in the Hancock Park area of Los Angeles at around 4:15 a.m. Locals will tell you that Hancock Park is a tony neighborhood (but not decadently so like Beverly Hills or Bel Air) that almost makes you feel as if you are in Westchester County or New England. Almost.

Bizarrely, David Halberstam was, like Hastings, a fierce and fearless young war correspondent in the 1960s (what Hastings was to Afghanistan and the U.S. military, Halberstam was to Vietnam and the Pentagon, with his work appearing in The New York Times). Halberstam also died in a car accident in California, although as a much older man. If you want to read an outstanding book on being a journalist, especially a war correspondent, read William Prochnau’s “Once Upon A Distant War”, which relates the tale of Halberstam and Neil Sheehan, among others, as young, headstrong reporters in Vietnam.

3. Max Brooks Is Not Part of the World War Z Promo Tour 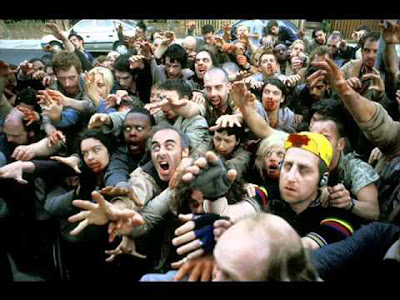 This is actually the line to acquire Wendy’s new pretzel bacon cheeseburger.

Here’s the author, who also happens to be Mel Brooks’ son, discussing how he had absolutely no control over the adaptation of his best-seller once Brad Pitt’s company purchased the rights to it. “Looks like World War Z in name only,” says Brooks, who notes that Pitt and Leo DiCaprio got into a bidding war for the rights to the story before the book was even published.

My two pennies: I LOVE the book. But, if you have not read it, you should know that it’s constructed a little like The Canterbury Tales. There’s a central story –a zombie apocalypse — around which are based a series of vignettes that allow Brooks to provide observations on economics, geo-politics, sociology, etc. It’s brilliant. But there’s no central character or characters. Hence, with the hindsight of Game of Thrones to guide us, the preferred option would have been to turn WWZ into an HBO series. And, hopefully, someday that will still happen.

As it is now, World War Z the film will resemble its literary sire the way “The Hunger Games” film might have resembled the book that preceded it if the film were about a pie-eating contest. That said, my man Adam Duerson caught a sneak preview and tweeted, “Resembled Max Brooks’ book 0%, but I enjoyed it 100%.”

Last two things: 1) Don’t cry for Brooks. No one forced him to sell the rights. Surely he banked a fortune on this. 2) To avoid confusion, World War Z is the 2013 summer apocalypse film in which everyone is not getting stoned. You’re welcome.

Last night Marissa Powell’s “The Man Who Shot Liberty Valance” World Tour (i.e., “Print the legend”) continued triumphantly in Hollywood, as she sang the words to her incoherent answer on Jimmy Kimmel Live. Poor Erin Brady, a.k.a. Miss USA, a.k.a. “Who Dat?” She is sentenced to a years of visiting hospitals and cutting ribbons and air travel and trying vainly to remain in shape for Miss Universe –which will not have a bikini competition due to its being staged in a Muslim nation –while Powell will slingshot that fame to a hosting gig on E! or perhaps replacing Diane Sawyer on “World News Tonight.”

Powell could be earning high six figures, if not seven, by this time next year, at which point the then 22 year-old can return to Nene “Wiki” Leakes’ question and say, “I don’t know who you’re talking about, home girl, but I’m making bank.”

5. Obesity: The Other White Meat

The American Medical Association votes to recognize obesity as a disease,  while the World Hunger Organization and Sudan vote to collectively raise a middle finger in the general direction of the AMA. As one follower on Twitter noted, “Obesity is a disease? Maybe we should start a 5-K to find a cure.” Yes, let’s. We’ll call it Fat’s Run.

Mess Sweep Twinbill from Barves; Costas Does Not Do Highlights

This had the makings of the Most Mess game of the season thus far. Through six innings Matt Harvey was pitching a no-hitter and had struck out 13 Barves. Then Lukas Duda failed to cover first on an infield roller, spoiling Harvey’s no-no. In the eight David Wright misplayed a ground ball (E-5) but the official scorer ruled it a hit. The Mess led 4-0 at the time but the Barves soon made it 4-3 –all three runs charged to Harvey, even though they should have been unearned– and had the tying run at third.

Honestly, if Harvey were to kill a teammate at this point, it’s justifiable homicide.

But then the Mess actually came through. Bobby Parnell whiffed an Upton –don’t ask me to remember which one — to end the threat and then worked out of a jam in the ninth to record the save.

For Harvey it was his first win since May 17 in Chicago, when he himself drove in the winning run.

In the nightcap, phenom Zack “To The Future” Wheeler pitched six shutout innings in his Major League debut to get the win. Of course, the Mess did not score until the top of the seventh and Wheeler left after six. He got the W, but barely. Get used to this feeling, Zack. Wheeler: 7 K’s but also five walks in his debut.

An obnoxious, boorish radio host with a meathead sobriquet was canned for saying something obnoxious and boorish. I’m shocked.

Between the NHL and NBA, we’ve had three overtime contests in nine games. Not bad. However, with the little ice ken that I possess, it feels to me that Boston has been the superior team every time it has taken the ice dating back to the second round. Toronto, which had a three-goal lead in the third period of Game 7 in the opening round, should have provided the knockout punch. Ever since the Bruins have looked lethal. So, Maple Leaf fans, you’ll always have that to live with. Oh, and by the way, Magic Johnson, THAT was a choke.