In the case of Wendy Davis versus the Texas State Legislature. The issue was not whether you are pro-life or pro-choice, but rather whether politicians will manipulate the legislative process or, if that fails, blatantly commit electoral fraud in order to get the law that they desire.

1) The irony of Davis’ numerous opponents in the Texas State Legislature attempting to get her to abort a filibuster whose aim was to block a vote on a bill that would outlaw most abortions in the state of Texas.

2) Easily the most memorable filibuster that the Lone Star State has witnessed since another blond, Taylor Boyle, refused to leave the field at the Houston Astrodome in the 1977 film “The Bad News Bears: Breaking Training.” “Let her speak!” equals “Let them play!”

3) So you have it, during a filibuster one may not take a potty break, eat, or lean on a desk –much less sit– but you may wear pink tennis shoes. No word yet on whether or not you may send texts or do yoga.

4) After the gallery (“We the people!”) shouted down the senate, preventing them from voting on the bill by the midnight deadline, they did so anyway and passed it. At 12:04 a.m. Then someone in the legislature attempted to change the time-stamp so that the record would show that the bill was voted on by midnight. Apparently, none of these legislators are aware of Twitter. At 3 a.m. Lt. Gov. David Dewhurst stepped to the Senate floor and declared the bill dead.

5) Gov. Rick Perry, who is in favor of the bill, declared, “In Texas, we value all life.” A notion worth remembering as the Lone Star State prepares to execute its 500th prisoner since 1976 this week.

6) While all of this was transpiring –from about midnight to 1:30 a.m. on the East Coast — not one of the cable news networks (much less the major networks) provided a scintilla of coverage. We were hoping to find it on The Longhorn Network, but no luck. At one point both CNN and MSNBC were showing taped coverage of the George Zimmerman/Trayvon Martin trial, making Aaron Sorkin’s point for him yet again. Even our friend Keith Olbermann weighed in on all of it, via Twitter.

7) Wendy Davis was the child of a single mom. She became a single mom herself at the age of 19. Then she graduated from Harvard Law School with honors. She is 50 years old, blonde, and attractive. Julia Roberts has already spoken to her agent this morning. Reese Witherspoon really cannot go down this path again, can she? Others worthy of consideration: Naomi Watts, Charlize Theron, Sharon Stone, Gwyneth Paltrow and The Rock (Update: someone just suggested Connie Britton; I like it).

8) The new official song of the Texas state legislature, courtesy of Slow Hand.

Hernandez: No stranger to double coverage

Within a 90-minute time span –or, as long as it takes Roger Cossack to don a coat and tie — Aaron Hernandez was arrested in connection with the murder of Odin Lloyd and was then released by the New England Patriots. The latter development, according to NFL experts, suggests that the Patriots’ security people have more information than the general public (no duh).

We all knew this was coming. Not necessarily because police searched Hernandez’s home three times, including for three hours on Saturday, in the past week. Not because they searched a pond behind his home. Not even because he was seen in the company of Lloyd on the night that Lloyd, whose body was discovered just a mile from Hernandez’s North Attleborough, Mass. home, was murdered.

Rather, because Hernandez handed police a shattered cell phone. Because he had his entire home scrubbed and wiped. Because he destroyed his home security system. And because he refused to cooperate. Police are not idiots, and you’d have to be one to not understand that Aaron Hernandez has plenty to hide.
As for football, the Pats let Wes Welker head west to Denver; Rob Gronkowski may never come back after all those surgeries, and Hernandez is history. Tom Brady is not happy and Tim Tebow may just wind up playing tight end this season.

Another pro athlete Hernandez, another moment in a vehicle, and potentially another “I can do whatever I want” episode. 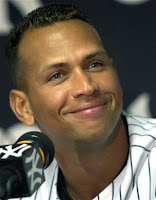 The New York Yankees have learned a valuable lesson this spring –something most of us knew years earlier: Alex Rodriguez isn’t worth the drama. While the Yankees are not a World Series-caliber team as presently constructed on the field, they would make the playoffs if they began today. That is due to a solid pitching staff, the best set-up/closer duo in baseball (David Robertson and Mariano Rivera) and a collection of position players (Robinson Cano and the Seven Dwarves) who compensate for a lack of talent by playing their hardest every night.

Then there’s A-Rod, the human chemistry killer. Last night’s transgression — a tweet announcing that a doctor had cleared him to play only one day after GM Brian Cashman had told reporters exactly the opposite –was not even that heinous. But Cashman’s over-the-top reaction tells you just how fed up the Pinstripes are with A-Rod’s vortex of melodrama. What does Cashman hate more: A-Rod himself or that $100 million albatross of a contract the Yankees gave him a few years ago?

We said it was wrong then. Just as we said the Justin Verlander contract will come back to haunt the Detroit Tigers (he may be Detroit’s third-best pitcher right now).

It has been a frustrating year for the most aptly named man in sports –and the broken leg while skydiving during spring training didn’t help. But if the Yankees can get Derek Jeter and Curtis Granderson back (Tex is gone for the season, which isn’t horrible because Lyle Overbay is filling in fine) and if Michael Pineda, who has a 1.64 ERA after three Double A rehab starts, can not only return but return to form, the Yanks actually would have a squad that can compete with anyone in the American League. Since no one in the A.L. is all that formidable this season.

But if A-Rod returns…watch how the chemistry wilts and dies. The question becomes how much of A-Rod’s remaining dollars will the Yankees absorb in order to ship him to another team and be free of him? He becomes David Justice in “Moneyball.” “No, man, I’m not paying you $7 million. The Yankees are paying half your salary. That’s what the New York Yankees think of you. They’re paying you three-and-a-half million dollars to play against them.” Because they couldn’t title it “Mother…” I’ll stop right there.

Robin Wright, Naomi Watts, and two young dudes who apparently stepped directly out of a Hollister catalog. All four are on a beach holiday and each hunk is the son of one of the SuperCougars. The film is titled “Adore”. Well, you can see where this is going. Oh, Princess Buttercup. It’s “Waiting To Exhale” meets “Blame It On Rio” meets “Bob and Carol and Ted and Alice” meets “Summer Lovers” meets “Whatever is Playing on Cinemax at 2 a.m.”.

That said, I think we can all agree that Robin Wright is aging better than any woman in Hollywood, and is getting more roles now (“The Girl With the Dragon Tattoo”, “Moneyball”, “House of Cards”) than she ever has. Spicoli, you idiot.

That tennis player who defeated Rafael Nadal in straight sets, Steve Darcis, withdraws from Wimbledon due to shoulder soreness. Can we have Rafa back, please?

“I’d Like A One-Way Ticket From Moscow to Ecuador”

Apparently, Edward Snowden has grown tired of the Moscow Domodedovo Airport Cinnabon and now has requested asylum in Ecuador. Snowden has said that his main purpose in obtaining the job that he had was to acquire the access he did so as to expose it. Maybe the NSA should have spent more time spying on him.

Comedian Ron White on what our immigration policy should be. It’s only funny because it makes absolute perfect sense. NSFP: Not Safe For Phyllis.

As always, Medium Happy is published via a grant by No One In Particular. Your doughnations are welcome. Sameriver@hotmail.com via PayPal. Thanks.