There just not right.

I’d omit the word “young”, but you get his point. As I’ve often said, written and tweeted, “Twitter is to the internet what the internet was to the computer. It is simply the most radical invention of the 21st century.”

B) Justin Bieber has the most followers at 42 million-plus.

C) Approximately 70% of Twitter users live outside the United States.

D) The show’s first 10-15 minutes focus on the Boston bombing and Twitter’s role in it. Fantastic stuff.

E) I was a little disappointed that, to showcase stupidity, the doc used a screen grab of a Tweet that read “You’re a moron.” There are countless “Your a moron” tweets out there or twit pics such as the one above.

F) In just the past 48 hours, Jay Bilas of ESPN may have instigated a turning point in NCAA amateurism with his tweets about the NCAA store. If I were ESPN I’d be doing a Twitter documentary myself focusing on how it has transformed and affected sports.

“The Twitter Revolution” will re-air on Friday night at 8 p.m.

Jay has a few beefs, as he used to say when he appeared on Letterman back in the 1980s

In Burbank, an outstanding interview of President Barack Obama by Jay Leno of “The Tonight Show” on Tuesday evening, an interview that took up the entire program. Matt Drudge tweeted “State of the art: Leno asked tougher questions than New York Times.”

(the above link is to Part 1 of the interview; from there you will be able to access Parts 2-6)

After lobbing one birthday-related softball at 44, Leno asked concise, sharp questions on: embassy closings, Benghazi, the NSA, Edward Snowden (“Some call him a whistleblower: What do you call him?”), the use of private contractors, the G20 Summit, Russia declaring homosexuality illegal, the economy, the failure of Congress to pass laws to help restore our national infrastructure, health care and Trayvon Martin.

Leno almost never cracked wise –he did show a picture of Obama and Putin sitting grimly together at a presser and likened it to his meeting with NBC execs –and displayed sincere interest. The only quibble is that he rarely followed up on an answer by Mr. President, but credit him with tackling as many issues as he did.

If you are old enough to recall Leno’s vintage appearances on Letterman back in the 1980s, you know both why so many of us have leapt from the Leno bandwagon (perhaps the one vehicle he does not own) and why Tuesday night’s performance was so welcome. Watch Leno here on Letterman in the mid-1980s –this is television history — and how quickly the acerbic side comes out. This is the Leno we never wanted to see depart. It was refreshing to see him reappear on Tuesday night.

Mariotti: To be portrayed in the biopic by Joaquin Phoenix.

Meanwhile in Santa Monica, my former AOL Fanhouse colleague and Deadspin pinata Jay Mariotti announced that he is launching a new website. Jay is hardly a popular man in the press box, but I’ll echo Dan Wetzel who tweeted yesterday, “I wish him luck. He’s always been nice to me.”

That was my personal experience with him as well.

Either way, his “Open Letter” yesterday was a Mariottifesto. Midway through I had to stop and return to my light reading of Moby Dick.

3) “And with the 69th Pick Overall the Arizona Cardinals Select…”

Would anyone have a problem if this franchise renamed itself the Honey Badgers?

Surely you remember Tyrann Mathieu, alias “The Honey Badger.” In 2011 the LSU cornerback/kick returner was the most electrifying defensive presence in college football and finished 5th in the Heisman Trophy voting (he won the Bednarik Award as the nation’s most outstanding defensive presence). In a season that boasted both quarterbacks Robert Griffin III and Andrew Luck –and dealt with the Penn State fallout –the Honey Badger was college football’s crossover cult figure.

Well, after being dismissed from LSU’s team last season for the dreaded “violation of team rules” (think of that refrain from the Beatles’ “I Wanna Hold Your Hand”), Mathieu’s NFL stock plummeted. Also, he’s just five-foot-nine.

And so when the NFL Draft arrived in late April, America’s most prestigious assemblage of overthinkers (NFL GMs) convened and ignored Mathieu in the first round. And the second round. Finally, the Arizona Cardinals (who perhaps learned a lesson by watching linebacker and local college icon Vontaze Burfict go undrafted the year before and then lead the Cincinnati Bengals in tackles as a rookie) selected him with the seventh pick of the third round.

How much money did this cover cost the Honey Badger?

So how’s Mathieu doing? One NFL scout told former Cardinal Ron Wolfley, now a Phoenix radio announcer, that “pound for pound Mathieu has been the best player on the field” at Cardinals’ camp and that he was going to “change the team.”

It’s amazing what a little humiliation can do for someone. Last month Mathieu tweeted “I’ll never forget what Mike Mayock said about me.” Mayock, an NFL Network (and NBC) commentator was actually not overly harsh. He referred to Mathieu as “a better football player than an athlete” and bragged that he had won a bet by Mathieu not being drafted in the top 50.

Mayock won a bet. But the Cardinals, as Wolfley attests, may have won the lottery. Every NFL team had an opportunity –most had more than one — to cage the Honey Badger. Arizona did. And it may make a world of difference in the desert. Waiting for Reid to expound on the topic of sperm whales.

Lets’ face it, after 25 seasons of August encounters, The Discovery Channel’s “Shark Week” had somewhat lost its bite. Then “Sharknado” happened last month (it aired on SyFy, not Discovery, and, oh, by the way, is just another example of the enormous influence of Twitter). So you knew that this August’s “Shark Week” had a terrific lead-in.

Kudos to TDC for seeing blood in the water and attacking. The result? “Shark After Dark”, a late-night talk show that for two nights this week has topped Conan, The Daily Show and The Colbert Report in ratings, drawing some 1.9 million viewers per night. Here are 63 vapid seconds from guest Tara Reid, one of the co-stars of “Sharknado.” Nice cut-in by host Josh Wolf, tossing in the possibility of tiger sharks.

The question becomes, Does The Discovery Channel abandon this cash cow (a cash cow is not what happens when a dollar bill mates with a bovine, just in case Ms. Reid is reading our blog) after one week of success? Or does it discover a way to maintain this forum and create a unique show in which stars appear to discuss nature, animals –and mammals — and all sorts of adventure- and outdoorsy-stuff. Why not?

Three winning tickets –two in New Jersey and one in Minnesota — were sold for last night’s Powerball, whose $448 million jackpot was the third-largest ever. How long until the first billion-dollar jackpot? 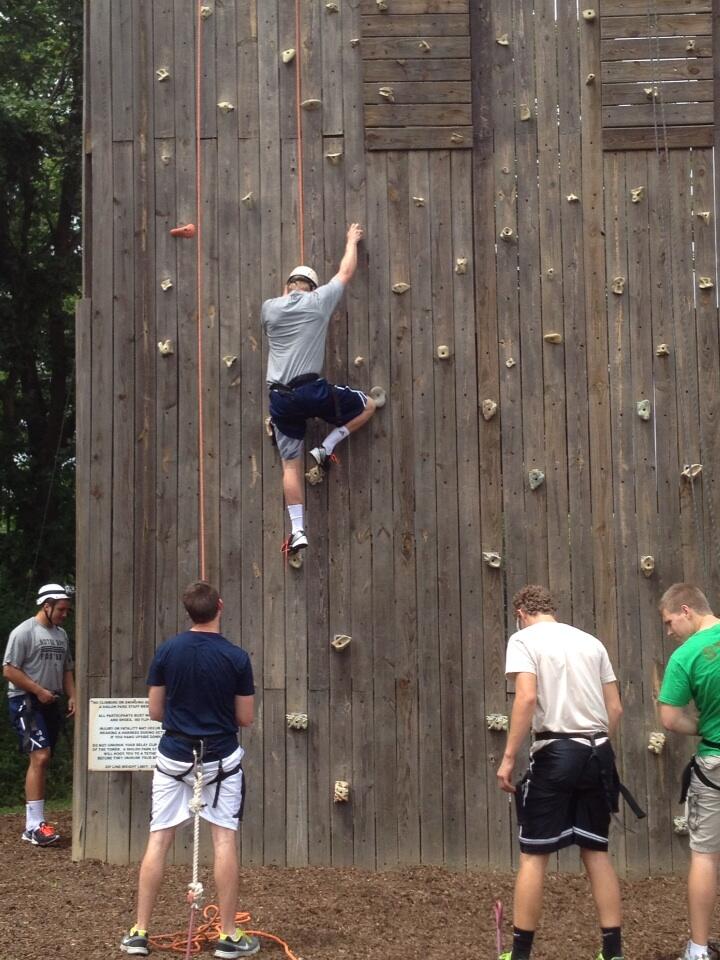 The Notre Dame football team conducted its first two practices of the season at the Shiloh Park Camp Retreat and Conference Center in Marion, Ind., about 100 miles south of campus. Thirteen players scaled the 35-foot climbing wall and reached the top, including 300-pounders Zack Martin, the starting left offensive tackle and a possible first-round pick in next year’s NFL draft, and reserve defensive end Kona Schwenke. Jack Nolan, an anchor and host at ND.com, tweeted out this photo of All-American defensive end Stephon Tuitt scaling the edifice. Tuitt is not listed as one of those who reached the top.

How do you get to Carnegie Hall (or, for that matter, Uganda)? Practice.

How do you get to Barclays Center? Bicycle.

In a city that has recently seen the addition of 42,000 Citi Bikes, Beyoncé Knowles demonstrated that she’s up on trends Monday night when she bicycled across the Brooklyn Bridge to commute from Manhattan to Brooklyn for her final show at Barclays Center. Very, very cool.

Next time, may we suggest the Williamsburg Bridge? Fewer tourists and pedestrians.

7 thoughts on “IT’S ALL HAPPENING! August 8”