That’s superwoman Marissa Mayer, wife/mom/striking beauty/and Chief Executive Officer of one of the world’s most innovative companies, Yahoo!, posing for her 3,000-word profile in this month’s Vogue. Strike a pose, indeed. Here’s the piece, by Jacob Weisberg, on the 38 year-old Silicon Valley titan, who confesses to preferring even numbers (me, too! I can divide any check in my head in the time it takes me to walk from table back to the computer, five credit cards or less, as long as it’s an even number). We are so much alike, you and I, Marissa!

Sunday’s “Breaking Bad” was a series of one-on-one confrontations between the Schraders and the Whites interrupted by some subterranean shenanigans and an enormous black man enjoying a mound of cash as a mattress. Some people hide their cash under a mattress, while others make it their mattress.

For those not keeping score, the verbal bouts were, in order of appearance:

Skyler White vs. sister Marie Schrader (Marie, via a slap to the face)

Marie Schrader vs. husband Hank Schrader (Hank wins, which will ultimately be his loss)

Skyler White vs. husband Walter White (Skyler wins, shows that she too can be a criminal mastermind).

It was a good episode for fans of GPS tracking and subterranean subterfuge. Hank has buried all the evidence, as well as the family fortune, somewhere in the vast New Mexico high desert and saved the coordinates on a lottery ticket –you’d think he’d have learned his lesson about hiding incriminating evidence in plain sight. Also, having lived in New Mexico and felt that hard earth, there is no way Brock Lesnar, much less a middle-aged, cancer-addled White, digs that hole that deep in one day. Not happening.

As for Lydia, she visits the underground meth lab (a buried bus or motor home), deems it has failed inspection, and the next thing you know a massacre takes place up on terra firma. Lending new meaning to “terminate all employees immediately.” (wait, I already used that joke).

I think we all know this much: Hank cannot defeat Walter, or Jesse, in a battle of wits. He’s that cop who isn’t smart enough to think like a criminal. I’ll take Walter minus the points from here on out. Here are Sepinwall’s thoughts.

3. The Race Across The Sky 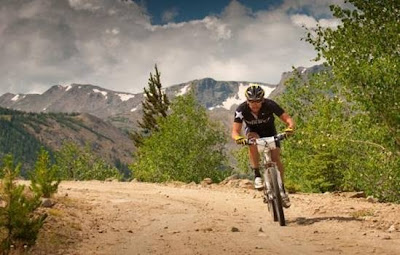 I’m more than a week late on this, but I did not want August to pass without a mention of the Leadville 100 Mountain Bike Race. It’s an out-and-back race, launching in Leadville, Colo. (50 miles each way) and contested across the crests of the Rocky Mountains. On August 10 Leadville staged its 20th annual race, and both the men’s and women’s champions shattered the existing course records. Alban Lakata of Austria defended his title and crossed the finish line in six hours, four minutes and one second, shaving more than 12 minutes off the existing mark (6:16:37).

In the female division, Sally Bigham of England sliced 11 minutes off the existing record, finishing in 7:17:01, and earning her first title.

Trail Rider: Bigham getting after it.

You may recall that Lance Armstrong first raced Leadville in 2008, finishing second to six-time champion David Wiens. The following year Armstrong won and set a then-course record of 6:28. He is now banned from competing there, of course.

There is also a Leadville 100 trail race (running) that was contested this weekend. Leadville, by bike or foot, should be on your Bucket List if you are a triathlete. 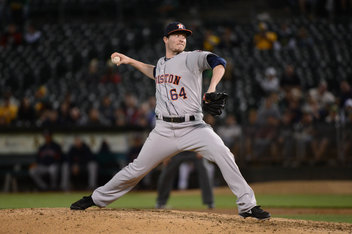 We want Elmore to play all nine positions now.

The Texas Rangers, who scored 15 runs in Saturday’s win against Seattle, post 11 runs in the third inning of last night’s pummelization of Houston. Eleven runs, and the Rangers did not hit a triple or a home run (for the record: six singles, one double, three walks and two errors). In the eighth inning, with the Astros trailing 16-5, catcher Jake Elmore moved to pitcher and hurled a 1-2-3 inning. Elmore, who made his Major League debut at catcher (Elmore ordinarily is an infielder) four innings earlier, became just the 14 player in MLB history to both catch and pitch in the same game. He was also the only one of the four Astro pitchers to toss a scoreless frame.

So I got to thinking: If you’re the Lastros, 30.5 games out of first place, why not commit to having Elmore play a different position each inning for a nine-inning game at Minute Maid Park? You can promote the heck out of this. In case you are wondering, Elmore would not be the first player to perform this feat: It was previously done twice in 2000 (Scott Sheldon, Texas, and Shane Halter, Detroit) once in 1968 by Cesar Tovar (Minnesota) and originally in 1965 by Bert Campaneris (Oakland).

By the way, Campy’s stunt was the brainchild of legendary A’s owner Charles O. Finley. He promoted it as “Campy Campaneris Night” as the A’s were in the final throes of a 103-loss season (great minds, etc.). Campy’s night, Sept. 8, 1965:

9th inning: C, With score tied and men on first and third, the Angels attempt a double steal. On toss back to home plate, the runner barreled into Campy, who held onto the ball for the out. Campaneris had to leave the game, though, with a shoulder injury and the Angels would win in the 13th inning.

See, we all learned something.

My buddy A.J., who is just 22 (I’m his friend when circumstances allow me to not have to be his father figure)  has designs on being Hollywood’s next Ryan Gosling. Or Derek Cianfrance (that’s the director of “Blue Valentine” and “The Place Beyond the Pines”, who actually lives in A.J.’s Brooklyn ‘hood and whom, of course, A.J. has approached and introduced himself to.

A.J., by the way, is fearless. He has in the past introduced himself to Mark Cuban and Eric Chavez, at different times, at the same Upper West Side saloon. Cuban and A.J. would hang out for an entire evening, whisking around New York City with some female accompaniment in a rented sedan. When A.J. Burnett was traded from the Yankees to the Pirates, Chavez actually mistakenly sent my A.J. a text asking how he was doing. I solved the riddle for A.J. as to what that was about. A.J. once even approached Ann Hathaway at a coffee shop off 14th Street and inquired, “How’s the” career going?” (“Good,” she replied. “How’s yours?”).

Anyway, lower on A.J.’s list of interests is painting, although to my untrained eye he has some serious skills. He brush-worked the above piece in about four hours on a recent evening, and there’s more like this that I’d like to highlight. So, yes, now Medium Happy is an art gallery of sorts. If you like this piece, let me know. You can be the first on your block to own an A.J.

It says here “Vampires should not remain outdoors during daylight ho— OWWWWW!!!”

On the season finale of “True Blood” (we jumped off the bus after Godric’s self-immolation back in Season 2), actor Alexander Skarsgard, i.e. Peter Northman, meets a buck-naked, full-frontal fiery end while relaxing on a lounge chair and doing some light reading atop a snowy peak in Sweden. In case you did not know, Skarsgard’s dad, Stellen, is the dude who played the supercilious professor in “Good Will Hunting.”

After Sunday night’s bean brawl in Boston, Alex Rodriguez, who is currently appealing a 211-game suspension for his involvement with the Biogenesis lab, was asked if he thought Red Sox pitcher Ryan Dempster, who plunked him, should be suspended. A-Rod smiled and said, “I’m the wrong guy to ask about a suspension. Holy mackerel.” What a rare, honest, and hilarious moment from him.

****
Earlier, during that same game, as a 9th inning appearance by Mariano Rivera loomed and Alfonso Soriano was at bat, ESPN’s Curt Schilling harked back to Game 7 of the 2001 World Series, a game in which all three men played a significant role. Schilling recalled that after Soriano hit a home run off him in the top of the 8th to put the Yankees ahead, 2-1, the first thing he noticed was Rivera warming up in the bullpen (I’ll throw the challenge flag on that).

Maybe not — remember, this was before the epic Yanks-Sawx series of 2004 — but just to correct Schilling, that game took place on November 4.

It’s a good question, so let’s ask it: Why isn’t Ryan Braun taking anywhere near as much heat for fraudulently defaming an innocent man as an anti-Semite as Riley Cooper has for using the N-word? I’ll take a stab at it: 1) We have Cooper’s slur on video, which is always more powerful and 2) the N-word trumps “anti-Semite.”

It was odd to read the “anti-Semite” news on ESPN’s scroll Sunday night, then flip to “Breaking Bad” and watch the Artist Formerly Known as Dr. Timothy Watley, DDS, who once recklessly labeled Jerry as an “anti-Dentite.”

Tuned in to Fox Sports 1’s premier of “Fox Football Daily” and within 30 seconds Jay Glazer felt the need to interrupt host Curt Menefee and tell us that Brian Urlacher cheats at golf. “He once put Vaseline on my steering wheel,” Glazer told us, which one can only hope was not a double entendre.

I missed “Crowd Goes Wild”, hosted by Methuselah, but I’ll try to catch it today. I’m a huge fan of Jason Gay’s tweets –and columns –but transitioning to television? We’ll see.

Oscar Pistorius indicted. The further away we get from the night of Reeva Steenkamp’s death, the more prepostorius Oscar’s alibi sounds, no?