Does the Savannah River separate the dreamers from the contenders? We’ll know by September 10.

Everybody talkin’ ’bout Alabama-A$M, but that’s not until September 14 — and Roll Tide will have two weeks to prepare after opening with Virginia Tech (the Aggies meet Sam Houston State the week before, so that’s a push). Ohio State is a leviathan, but the Buckeyes’ lone scare through four games will be a visit to Berkeley (a scare, that is, if they were to encounter Naked Guy, but he committed suicide a few years back).

Hence, the epicenter of college football during its opening two weekends will be the Chik-Fil-A (although I’ve always thought Bojangles deserved more hype) Triangle that is formed by the loci of Athens, Ga., Clemson, S.C. and Columbia, S.C. Georgia, South Carolina and Clemson all currently reside between spaces 5-8 in both the USA Today and AP polls. Better yet, the Bulldogs face both the Tigers and Gamecocks in the season’s first two weeks (this, my friends, is how national championships should be decided: meaningful teams playing meaningful games long before December).

The Gamecocks and Tigers will meet in their Palmetto State showdown on Nov. 30

All three have national championship potential.

All three have at least one Heisman Trophy candidate (the Dawgs may have two): Quarterback Aaron Murray and tailback Todd Gurley for Georgia; wide receiver/returner Sammy Watkins for Clemson; and defensive end Jadeveon Clowney (nice piece by Greg Bishop of the New York Times) for S.C.

It’s REM versus Creed (their lead guitarist is a Clemson alum) versus Hootie and the Blowfish. It’s ground zero for college football’s first two Saturdays. It’s the Beautiful South, and there’s no place you’d rather be between August 31 and Sept. 7.

There it goes: Ichiro slaps an opposite-field single for No. 4,000

Ichiro Suzuki slaps an opposite-field single off Toronto knuckleballer R.A. Dickey for his 4,000th career hit in Japan’s Pacific League and the Major Leagues combined. Since arriving in the U.S. in 2001 at age 27, Suzuki has recorded 2,722 hits with the Seattle Mariners and New York Yankees. He had 1,278 with the Orix Blue Wave.

Only two players have ever hit more: Pete Rose (4,256) and Ty Cobb (4,191). That all three men had an even number of letters in both their first and last names is telling (no, it isn’t, but it’s kind of cool). What is telling is that all three men were contact hitters. They were not –Suzuki is not –free swingers.

I’m always amazed that no one copies the unique style of Suzuki, who is still so spry at 39. To watch him bat is to watch Dali paint (although I doubt Salvador would’ve allowed 35,000 people to watch him paint while chanting his name). No one does it the way he does. His swing is more reminiscent of a two-handed Federer backhand than it is, say, Ted Williams. Ichiro waits for the ball to meet his bat and then places it. He lets the pitch’s velocity do all the work in terms of how far the ball will travel.

Ichiro had an MLB-record 262 hits in 2004, and had at least 200 hits in each of his first 10 MLB seasons. No one else ever put together 10 consecutive seasons like that, and only Rose amassed that many 200-hit years over the course of his career. If you want to call Ichiro the greatest hitter of all time, you have a solid argument.

The Yankees may not even be a playoff team this season, but they currently have two Hall of Famers on the roster who do their jobs like no one else before them have quite done: Ichiro and Mo Rivera. That’s almost worth the non-bleacher seats price of admission. Almost.

A) Alfonso Soriano, who belted the game-winning two-run homer for the Yanks in the 8th, also began his pro career in Japan (Hiroshima Carp…I wouldn’t eat one of those if I were you, for various reasons) and had two hits there.

B) Infielder Jayson Nix, who was the back-page tabloid cover boy (“New York Nix”) on Wednesday after being Tuesday’s hero, was hit by a Dickey pitch and suffered a season-ending injury to his hand (broken). That R.A. Dickey’s 80 mph “heat” can end your season is indicative of the injury-plagued year the Yankees have endured.

C) Granted, it’s a modest four-game win streak, but the Yanks have not lost since Ryan Dempster beaned A-Rod on Sunday night.

3. The Tourist, The Bike Messenger, The Cabbie, The Syndicated TV Star/Physician, the Pizza Truck Owner (and His Supermodel Girlfriend), and the Plumber (a.k.a. “My Left Foot Left”)

On Tuesday, shortly before noon and just outside the steakateria, a cabbie from Bangladesh and a bike messenger started playing Turn 3 at Daytona on Sixth Avenue in the heart of Rockefeller Center. The cabbie aggressively turned left onto 49th Street, striking both the cyclist then jumping the curb and hitting 23 year-old British tourist Sian Green, whose left foot was severed.

That’s when things got interesting.

David Justino, a plumber, rushed over and fashioned his Carhartt belt as a tourniquet.

Dr. Mehmet Oz, who was passing by with a group of students, stopped to adjust the tourniquet and deliver first aid. 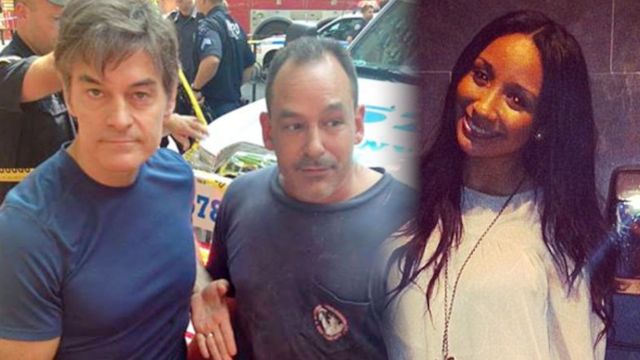 Matt Crespo, who operates a pizza truck (food trucks are WAY popular in midtown Manhattan) and who just happened to be there with his legitimate supermodel girlfriend, Heide Lindgren, grabbed the severed foot and placed it in a cooler — a cooler from the same hot dog vendor who only minutes earlier had sold Green the hot dog that she was enjoying when the taxi plowed into her.

4. What If Baseball Had NOT Suspended Ryan Dempster? 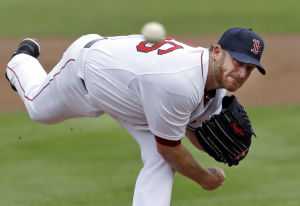 As Red Sox Nation wonders whether Dempster’s diabolical act incited the Yanks to a postseason run.

Sometimes you should just allow fate to take care of matters. Had baseball waited a week to decide Dempster’s fate, he would be pitching this weekend when the Red Sox visited the Los Angeles Dodgers. That is, when Boston played in a National League ballpark, meaning that Demptser would come to bat. That the opponent would be the Dodgers, whose manager, Don Mattingly, is one of the most beloved Yankees of all time, would make it that much more intriguing (by the way, a Dodgers-Red Sox World Series, especially in light of last year’s trade, would rawk!).

Does any Major League pitcher want to bean Dempster for his “I, The Jury” moment last Sunday night at A-Rod’s expense? Probably not.

Would Mattingly “recommend” one of his pitcher do so? Again, unlikely.

Still, just to have the moment when Dempster strode to the plate, and the pregnant feeling inside the stadium that, hey, here’s an American League pitcher who could get his comeuppance (justice, some might call it) for thinking it was his role to punish A-Rod.

Alas, it is not to be. Dempster is already serving his five-game suspension –which, in actuality, is no suspension — and will likely pitch next Tuesday at Fenway versus the Orioles. And, yes, the irony of Dempster serving his suspension before A-Rod serves his…we get it. Yesterday NBC announced that it would be doing a live Notre Dame pre-game show from inside Notre Dame Stadium this season, which is cool (and long overdue). Liam McHugh, who is the network’s best on-air hire in quite some time, will host and be joined by two former players with no connection to the Fighting Irish: Heisman Trophy winner Doug Flutie of Boston College and Hines Ward of Georgia (and, of course, the Pittsburgh Steelers).

I’d just like to add that the blueprint for this show was the “Vonage Notre Dame Pregame Show”, which ran as a webcast on NBCSports.com from 2006-2008. Paula Faris (above) was our incandescent host and I was the closest thing we had to a co-host. Paula referred to me as “The Professor” and when I was not seated in the chair in which you see Bettis, guests included Lou Holtz, Regis Philbin, Mike Golic and others.

We did both a pre-game show and a post-game wrap, by the way, and all seven people who watched it on the web appeared to enjoy it.

Paula was, and remains, eminently suited to such a broadcast and while she has moved on up to a national presence at ABC, this is where she belongs: hosting a show and letting her personality and intelligence come to the fore.

BQQB commandeers the desk after his final home game.

A few notes: Paula is a Michigan native and, while not a UM alum, an avowed Wolverine fan. It was a cruel torture for her to have to cover the Irish, a torture alleviated somewhat by a terrible 2007 ND season (3-9) and an underwhelming 2008 campaign… One of the more memorable interviews occurred between Paula and Jeff Samardiza’s dad, on senior day in 2006, when the elder Samardzija veered near Joe Namath/Suzy Kolber territory. I doubt that video exists, but it was funny; Paula handled it like a pro… on that same afternoon, as the Irish moved to 10-1 heading into the next week’s showdown at USC, quarterback Brady Quinn actually jumped up onto our anchor desk (Paula and I were preparing for the postgame show) and began leading the student section in a “BEAT SC!” cheer. I had an uncomfortably close view of BQQB’s derriere… and, finally, I’ll never forget Paula and I doing a post-game show not during the season after she had her first child, a daughter. The infant missed her mom and was beginning to get fidgety, and Paula’s wonderful husband, John, was at a loss. So our colleague, Alex Flanagan, approached and did the nanny thing while we did the show. When the mother of your child is Paula Faris and the woman holding that child is Alex Flanagan, you’ve pretty much got the world beat.

If those three Oklahoma teens think they were bored last week, wait until they see what the rest of their lives has in store for them. Tragic and mind-numbingly stupid.

Kudos to Andy Gray of SI for noting Wilt Chamberlain’s 77th birthday yesterday and providing this photo with the caption, “Here (Wilt) is in fourth grade. Can you spot him?”

****
Molly Ringwald tweets, after a three-week hiatus from Twitter, “I’m back. What did I miss?” and Jason Gay of The Wall Street Journal comes back over the top with, “Nothing. Jake’s still outside the church with the red Porsche.” And that’s why Jason Gay is one of my favorite follows. (that’s two Jason Gay mentions in as many days, veering dangerously close to Gareth Bale territory). 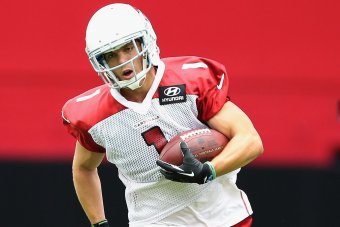 Toma’s brief stay with the Cards comes to an end.

The Arizona Cardinals cut former Notre Dame wideout and undrafted free agent Robby Toma. All the 5-10 Hawaiian does is catch everything thrown his way, and often with one hand. If things work out, the Patriots will sign him and turn Toma into the next Wes Welker/Danny Woodhead/Danny Amendola. If things don’t work out, he may just return home to Oahu. Either way, it’s good to be Robby Toma. Team to love this season? Stanford. The Cardinal lost two games all last season, neither of which it should have: they blew a 13-3 lead at Washington on a Thursday night (NEVER pick the higher-ranked team, playing on the road, on a Thursday night ESPN game) and their overtime loss at Notre Dame was a disputed matter of inches. Stanford QB Kevin Hogan returns after the Andrew Luck Hangover Season, and its marquee opponents –UCLA, Oregon and Notre Dame — all visit the Alto of Palo. The toughest road contest is at USC, which two years ago was a classic –and could be again this season.

The Cardinal meet the Hunger Factor, too. Watch out for them.