As always, I assess based on what transpires on the 120 x 53 yard rectangle or, if you prefer, quadrilateral. Preseason polls are utterly meaningless. Turns out that Johnny Football lacks ESP: Extra-Sunseri Perception (see, he’s the dude who returned the INT 73 yards for a TD and–never mind). Next up: Colorado State.

Tigers must combat the dreaded “Higher Ranked Visiting Team Playing on ESPN Thursday Night” effect in Raleigh in two nights. Remember that the Wolfpack spoiled Florida State’s season a year ago. Next up: at North Carolina State.

Buckeyes looked most impressive in Berkeley. Fifth-year senior QB Kenny Guiton, in his first start, threw a school-record 90-yard TD pass on his second play from scrimmage. Next up: Florida A&M

Like Oregon, the Seminoles fell behind early at home and then scored 59 uninterrupted points versus Nevada. Next up: Bethune Cookman (Seriously, Noles? Seriously?)

Like Alabama, the Bruins found themselves trailing by at least two touchdowns on the road (in their case, 18 points) versus a ranked opponent (Nebraska) and then scored five uninterrupted touchdowns. Next up: New Mexico State.

“If you see Johnny Football in the hall, tell him he played a great game” — Nada Surf, 1994. He did. The two highest point totals Alabama has surrendered in its last 37 games, 29 and 42, have come against Manziel and the Aggies. Saban’s Tide had never allowed more than 38 before last Saturday. Next up: Southern Methodist

Les Miles has been in the news more in the past week for his tenure at Oklahoma State than for his Tigers’ 3-0 start. Next up: Auburn.

My buddy Dan, a Phoenix-based attorney, posits that Walter White is going to pull a Bruce Willis in “Pulp Fiction” and rescue his own personal Gimp, Jesse Pinkman, from sociopath Todd and his evil Uncle Jack. I like it. Walt may have hated Jesse in that instant, but now that he has lost his family, most of his wealth and perhaps having only months to live, his best shot at some semblance of salvation is to rescue Pinkman from his predicament. Dan also thinks that Uncle Jack, whom we always see lighting up, will meet his end courtesy of a Ricin-laced cigarette, again courtesy of Walt.

“I’m sorry for your loss.” That was rich, Vince Gilligan. Rich!

Finally, a hand for Jesse Plemons, please. The Matt Damon doppelganger has been in two TV shows, Friday Night Lights and Breaking Bad. Prit-tee, prit-tee good. Is it too much to hope we catch Todd wearing a Crucifictorius T-shirt?

If I am a Nebraska fan, I’m far more offended by my defense wearing black jerseys and surrendering 41 points at home to UCLA than I am by a cluster-F-bomb barrage by head coach Bo Pelini that occurred two years ago. Far more offended that my defense has now allowed 45, 70 and 41 points in three of the past five games –with the other two opponents being non-AQ schools. Or maybe I’m just offended that we left the Big 12 for the Big Ten. Why just turn your back on all of your tradition?

Trout is not a bad fielder, either.

You don’t hear very much about Vineland, N.J., native and former SI cover boy Mike Trout this season, and that’s because his team, the Angels have underachieved (73-77) all season. But it’s worth nothing that last year’s AL Rookie of the Year is second in all of baseball in both batting average (.331) and OBP (.436) to last year’s –and this year’s–AL MVP, Miguel Cabrera.

When you recall how much hype Trout was garnering late last summer, it’s astounding how rarely you hear his name at all this season, even though he’s arguably the second-best hitter in baseball. Two reasons: his team’s miserable season and Yasiel Puig.

–So Michigan almost lost at home to Akron, a school that had lost 28 consecutive road games? Who kidnapped Devin Gardner?

–Michigan State has pulled its annual “Our Stats Don’t Matter Before We Meet Notre Dame” trick, as the Spartans are tops in the nation in total defense to this point. Again, meaningless.

–Stanford has allowed 13 and 20 points to San Jose State and Army, respectively. Keep in mind that classes have not even started in Palo Alto, so you wonder if it’s just a matter of malaise with the Cardinal. Not impressed thus far.

–Tommy Rees has now thrown for 300-plus yards in three consecutive games. 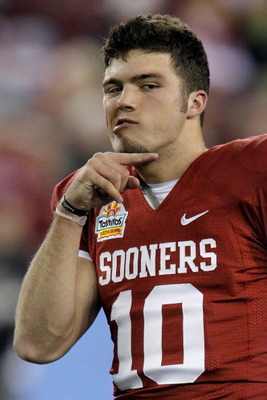 –Bob Stoops finally tears the “Gimmick” label off the Bell Dozer and the junior tosses for 413 yards and four touchdowns versus Tulsa. That’s the most yards a Sooner quarterback has thrown for in his inaugural start, and I’ll remind you that former Sooner starters include Heisman Trophy winners Sam Bradford and Jason White as well as Landry Jones and Troy Aikman. What took you so long, Bob?

–I understand why pundits are excoriating the Pac-12 officials –they’ve messed up plenty in the past (just ask Stoops) — but how does a quarterback, in this case Wisconsin’s Joel Stave, not know that you are to take a knee? That’s sub-Pop Warner Junior Pee Wee-level football acumen.

–USU at USC. Utah State put up 70 points on Weber State last Saturday and 52 on Air Force the week before. Lane Kiffin and his defense best be prepared for Chuckie Keeton and the Aggies.

–Oklahoma State destroyed Lamar 59-3 last Saturday. I know it’s early in the season, but what if the Cowboys were to go 13-0 and play for the national championship in the final season of the BCS? Oh, that would be a dirty game, alright. Keep in mind that it was someone from Stillwater –the band, not the town– who famously uttered, “He was never a person. He was a journalist.” William Miller, meet Thayer Evans.