Robertson. Notice, behind him, how the ballpark’s premier seats are empty. Wilhelm and Costanza could run this team better.

As I stole glances last night of the New York Yankees losing their third of four games to the last-place team in their division (their sixth loss in seven games, all on the road), the Toronto Blue Jays,  I had an epiphany: the Yanks really are America’s team.

You mean because their leader is a man of mixed African and Caucasian heritage who has been absent all summer?

You mean because too much of the team’s infrastructure (Rivera, Jeter, A-Rod, Pettitte, Ichiro) is aging and on the verge of collapse and nothing is being done to replace them?

Because the Yanks, too, are composed of a vanishing middle class.

The average Major League Baseball salary in 2013 is $3.2 million, and the MLB minimum is $480,000. In other words, I’m well aware that the terms “middle-class” and “poverty” are relative here.

The Yankees, who have MLB’s second-highest payroll behind the Los Angeles Dodgers (who at least this season are validating it, as the Dodgers have baseball’s second-best record), have nine players on their roster who are paid at least triple the Major League average and 11 who make at least double it.

On the other end of the spectrum, the Pinstripes have seven players who do not even earn one-third of the Major League average. Only five players, or 20% of the 25-man roster, earn within a two-times multiple (between twice as much or half as much) of that $3.2 million MLB average.

The Yanks have two players –two– who earn near the MLB average and are also highly productive players. They are also, not coincidentally, fan favorites because they do their jobs and they don’t cause off-field drama. You’d think owners would get that fans cheer for players who remind them of their own selves, their own career situations. Those two are set-up man David Robertson, who may be a more reliable reliever than the legendary Rivera at this stage; and offensive catalyst Brett Gardner, whose departure from the lineup with a Grade 1 rib cage injury occurred just before the Yanks began their 1-6 slide (and that one victory was quite unlikely, as NY battled back from a 4-0 deficit in the eighth and Mo almost squandered it in the 9th).

Gardner also leads the Yankees in dirty uniforms per game.

Robertson? He, and not Rivera, leads the Yankees in ERA (2.18), WHIP (1.08) and, among pitchers with at least 60 innings of work (that’s how many Mo has pitched), in strikeouts-per-nine innings (10.74). Unassuming David Robertson has been the Yankees’ best pitcher this season.

Gardner? After Cano, who only leads the team in batting average, RBI, home runs, OBP and hits, the Tim Dwight doppelganger has been the team’s most potent offensive weapons. He leads the Yankees in steals, runs, triples (has nearly half the team’s total, 10 of 23) and is second to Cano in BA, OBP, doubles and BBs. (I need to mention here, and this is a testament to Cano’s, um, hustle, that Cano has zero triples this season). Gardner’s injury may keep him out of the lineup the rest of September, which is the coup de grace to the Yankees’ wild-card hopes.

Can I directly show how that translates to a faltering team? Am I forgetting that, with one enormous exception, 2nd baseman Robinson Cano,  every penciled-in position starter from last winter (catcher Francisco Cervelli, first baseman Mark Texiera, shortstop The Captain, 3rd baseman A-Roid, left fielder Brett Gardner, center fielder Curtis Granderson and right fielder Ichiro 4,000 Hits-Though-Mike Francesa-Thinks-It’s-Bunk) has missed a chunk of the season due to injury?

The Yankees have two middle-class players. They need more. Because a healthy team, much like a healthy economy, has a dynamic and vital middle class.  If it does not, it’s a feudal system. And success, too, is futile.

The heck do ya mean,  College GameDay, coming to us live from Fargo, North Dakota, this Saturday? It has a little to do with the fact that the Dakota State Bison, an FCS program, are two-time defending national champions at their level and are ranked No. 1 (in those two ways, they ARE the FCS Alabama minus the brittle head coach) and they also just beat Kansas State, which as recently as last November SI called “…The Nation’s Best Team.” (Okay, that was last year)

It’s an inspired, and deservedly praised move by College GameDay.

There’s also the matter of this week’s Top 25 slate, as so many programs host bodybag games while taking their last deep breath before conference play begins. Check out these spreads…

Colorado State at No. 1 Alabama…39 points

Florida International at No. 7 Louisville… 43 points

Bethune-Cookman at No. 8 Florida State…40 points

Idaho State at No. 17 Washington…49 points

(I’ve bold-faced the favorites I think will cover). 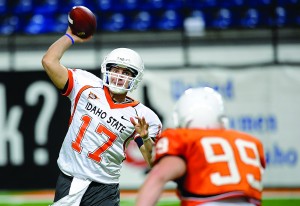 Nearly one-half of the Top 25 are both home and four-touchdown favorites this weekend. Five of them are six-touchdown favorites. The only truly intriguing games involving Top 25 schools are No. 23 Arizona State at No. 5 Stanford (the Cardinal are less than a touchdown favorite at home? Interesting), unranked Tennessee –they of the 45-point loss at No. 2 Oregon last week — at No. 19 Florida and unranked but unbeaten Michigan State at No. 22 Notre Dame, which promises to be a rock fight. 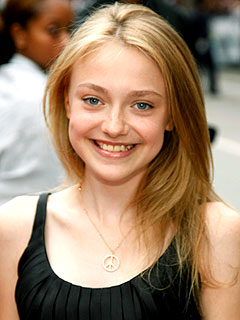 Shouldn’t she be tomorrow’s celebrity picker? 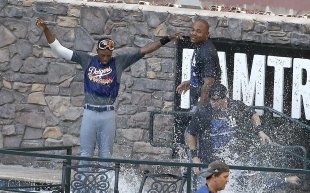 A pool party without A) Bitches B) Ho’s or C) Moet? What kind of splash bash is this?

The Arizona Diamondbacks politely suggested to their divisional rivals, the Los Angeles Dodgers, that should the LADs clinch the NL West at their ballpark this week, that they not celebrate on the field. Well, the Dodgers did clinch and then they did comply with the D-Backs’ request. They did NOT celebrate in the D-Backs’ yard. Instead, they dashed across the yard and had an impromptu pool party in the home team’s pool that is situated just beyond the right centerfield wall.

As every Phoenician and every Angeleno knows, what is a back yard without a swimming pool?

We are hearing that A) the Diamondbacks are upset that the Dodgers staged this pool party and B) Jamie Foxx is pissed someone threw a pool party and neglected to invite him.

P.S. I grew up in Phoenix…without a pool in my backyard. The idea of running across someone else’s yard, hopping a fence, and jumping into a neighbor’s pool is as natural to me as dipping a tortilla chip into salsa. Phoenicians should salute what the Dodgers did.

Who’s on first? Not Carpenter.

It’s late September, the Colorado Rockies are in last place in the N.L. West –no pool-hopping for you! — and playing the first-place St. Louis Cardinals. And still Rockies first baseman Todd Helton provides this moment to remember, fooling the Cards’ Matt Carpenter with the old hidden-ball trick in the top of the first inning. Carpenter is the Cards’ leadoff hitter; he should know better.

As I always say, baseball is the only sport where you have a chance to see something you’ve never seen –and often never imagined — every time you attend or watch a game. Love that.

By the way, Helton, who is retiring at season’s end, hit the game-tying solo home run in the 9th inning and Colorado won in the bottom of the 15th. Not only does St. Louis squander the getaway game, but they delay their departure by nearly two hours while doing so.

Earlier this month the U.S. News & World Report, as it annually does, released its annual “Best Colleges” rankings. Scott Wolf voted USC No. 1, but that’s another story. Anyway, Princeton finished No. 1. in their rankings.

You should know, if you ever create progeny unfortunate enough to be accepted into the freshman class at Old Nassau, that the cost of attendance there (tuition, room-and-board, J. Crew fall wardrobe) is $57,495.

Now, let’s say that last year you had told your 18 year-old daughter, “Sweetie, instead of attending Princeton this year, why don’t we invest $50,000 in the two companies whose names appear on the CNBC crawl as often as any others: Facebook (FB) and Tesla (TSLA). We’ll invest $25,000 in each company.”

Had you done that, one year ago today, here’ what would have happened.

Granted, the stock market isn’t a One Direction arrow. The funny thing, though, is that with the exception of Apple (AAPL), my observation as an addicted CNBC viewer is that no two companies’ ticker symbols and stock prices appear more often on that network’s crawl than these two. It’s not as if you needed to search for a needle in a haystack to find them. It was like searching for an elephant in a haystack.

Oh, and you might remind your child that Facebook might not ever have happened –or at least not occurred so quickly –had Mark Zuckerberg not had a friend who’ earned a couple hundred thousand investing in oil futures the summer before. Teach your children well.

If ABC airs this locally in the nation’s largest market (NYC) tomorrow, I’ll never utter a disparaging word against the Disney people again…this month. Anyway, it’s Firing Lane Kiffin versus Chuckie Keeton, the Aggie QB who’s already thrown 12 TD passes (and just one pick) in leading his team to an average of 50 points per game. If you’ve seen the Trojans play, they can’t put up numbers like that. Oh, and USU has only allowed 17 points per game. As much as Kiffin and USC’s four-star recruits will say they respect Utah State, they really cannot be as hyped for this game as they’d be playing Stanford, Oregon or UCLA. They better be.

And a 12:30 p.m. local start only means a lachrymose fan base. Hell, I don’t know how Arash Markazi is ever going to arrive on time. This will be the most intriguing game on TV tomorrow. Don’t black it out locally for me, Bristol. Please!

Admittedly, picking the Aggies to upset USC — as Stewart Mandel does in this week’s “SI.com Pickoff” –can lead one down the same path that Wallace Shawn followed in “The Princess Bride”. There’s the tendency to select Utah State as an obvious upset choice, followed by the rueful realization that it is SUCH AN OBVIOUS upset pick that you should not make it. Oh, and never get involved in a land war in Asia.

Shawn, as Vizzini, in his “Battle of Wits” with the Man in Black, alias Good Sir Westley, alias Cary Elwes:

So, you can overthink it. And you remember what happened to Vizzini, who overthought it? He died.

One thought on “IT’S ALL HAPPENING! Friday, September 20”