(The judges will also accept “My Three Sons”)

All dressed up, no place to go. Wait. Stop, reverse that. Okay.

Saturday Night Live distinguished alum Will Ferrell arrives onstage at the Emmys to hand out the final two awards of the night with sons Magnus (9), Mattias (6) and Axel (3) in tow.

“Unfortunately Helen Mirren and Maggie Smith dropped out at the last second and they called me literally 45 minutes ago and I couldn’t find child care, OK? We had a soccer game, there was a neighbor’s birthday party, a nut allergy, I didn’t have time to do my hair. It doesn’t matter, it’s great to be here.”

Now that’s the Best Comedy by a Modern Family I saw all night.

Let the record reflect that Bill Murray’s baby-stepping anxiety freak New Yorker, Bob, located Dr. Leo Marvin (Richard Dreyfus) and his brood in New Hampshire within a week while the entire DEA was unable to locate Walter White in The Granite State (also the title of last night’s penultimate episode of “Breaking Bald”) for what seems like months. (wondering what a game of “Penultimate Frisbee” would resemble: Does everyone just jog?) (Why? The writer on BB also wrote the screenplay for “Too Big To Fail”, which was adapted from Sorkin’s tome.)

As for the show itself, at some point Jesse Pinkman has to stop paying the price for all of Heisenberg’s sins, no? Okay, perhaps not. Watching one of only two people in the entire world that you care about take one in the back of the head as punishment for your attempted escape? That’s cold, Vince Gilligan. I mean, at least Adriana La Cerva was cooperating with the feds at the time she was iced on The Sopranos.

Where do we go from here for the final episode? Alan Sepinwall thinks, if I may take the liberty of paraphrasing his thoughts (I may not? Well, I shall, anyway) that WW, alias Heisenberg, wants to go Nathan Jessup. He WANTS the world to know who he is and what he did. In a strange way, he’s PROUD of it. That is why he is headed to New Mexico with, of course, a pit stop at a Cinnabon in Omaha.

Couldn’t Tarantino have found someone a little less, um, Aryan-looking, to be the leader of a band of NAT-zi hunters?

And that’s fine, but I’d love it if Walter had Brad Pitt’s the Nazi hunter, Aldo Raine, from “Inglourious Basterds” ride shotgun (and carry one, too). Uncle Jack and Todd need karma to knock at their barbed-wire fence.

Runners on 2nd and 3rd, nobody out in the bottom of the eighth inning, and the New York Yankees trail the San Francisco Giants by one run. On the day that the first pitch was delayed 50 minutes for a tribute to the greatest closer of all time (Yankee Stadium vendors were selling “Exit Sandman” T-shirts all weekend, and I hope Lars Ullrich and the boys ask for a slice of that pie). On the day that Pettitte made his final start at Yankee Stadium (although we all know it’s not the real Yankee Stadium, and we’ll only have the rest of our lifetimes to lament that foolish decision) and took a no-hitter into the sixth inning (he has 255 career wins, but zero no-hitters).

On a weekend when everyone’s favorite anti-hero, Alex Rodriguez, broke beloved Yankee Lou Gehrig’s career grand slams record, (24 overtaking 23), a mark that will forever be tarnished because A-Rod did so during a time when he might have been serving his 211-game suspension (speaking of records) for his role in the Biogenesis fiasco. That it was a game-winning home run –yes, A-Rod got a clutch hit after the month of August– made the irony even more delicious. Maybe they’ll put an asterisk after it. If there’s one thing the Yankees know, it’s late-September home runs to right field that merit an asterisk.

Anyway, tying run on third, nobody out. And the Yankees fail to score. Pinch-runner Zoilo Almonte (he entered after A-Rod led off the inning with a single…that’s right, TWO clutch hits) decided to make a dash for the plate on a two-hopper to the Giant 3rd baseman. OUT! Then Curtis Granderson whiffed. OUT! Then Eduardo Nunez singled to left, but Juan Perez — a Bronx native–threw out Robinson Cano at home. OUT!

I did not tag Robinson Cano in this photo…but Hector Sanchez did.

End of inning. End of game. End of 2013 season. End of an era that brought the Yanks four World Series, two Hall of Famers and two more retired numbers, 42 and 2. End of, for many of us who were here when the era began in 1996, a huge chapter of our lives as fans. And I don’t expect the Yankees will be having a Zoilo Almonte Bobblehead Doll day any time soon.

The Yankees still had one more at-bat remaining, but it was a lot like they still had a Game 7 in the 2004 ALCS with Boston. You knew that series was over after Game 6.

(To be fair, the Yankees were a long-shot to make the wild-card this season, anyway. It’s just the finality of it all.)

Jeter, by the way, spent the previous evening up in East Hartford watching his beloved Michigan Wolverines nearly become the only Top 25 team to lose this weekend. The Maize and Blue came back from a 14-point second-half deficit to outlast the Huskies, 24-21.

That was the average margin of victory in games involving Top 25 teams this weekend, each of which the ranked school (or, in the case of Stanford-Arizona State, the higher ranked school) won. We were treated to scores such as Ohio State 76, FAMU 0; Louisville 72, FIU 0; Miami 77, Savannah State 7; Baylor 70, ULM 7; and Washington 56, Idaho State 0.

Certain apologists will inform you that their schools need to schedule these body bag massacres in order to balance the budget of the athletic department. But that’s like saying the only answer is to lower the river when in fact you can also raise the bridge.

We all know, and accept, that football brings in the most revenue. It also has the highest overhead. If you want to balance the athletic department budget, stop there. But no one will. Because football -well, read the first sentence of this paragraph again.

And so we get a Saturday such as last Saturday. Stanford led ASU 29-0 at one point, by the way. Only Michigan and Notre Dame were involved in games decided by less than double digits. And GameDay went to Fargo.

(Oh, and a shout-out to Cecil Hurt who, upon seeing that Walter White was in exile in New Hampshire, tweeted, “Is this the same guy who decided GameDay should go to Fargo?”)

5. Luck Had Everything To Do With It

Luck delivers an emphatic spike after scoring on a short run while football coaches in both the Pac-12 and NFC West imagine the ball as Harbaugh’s head. 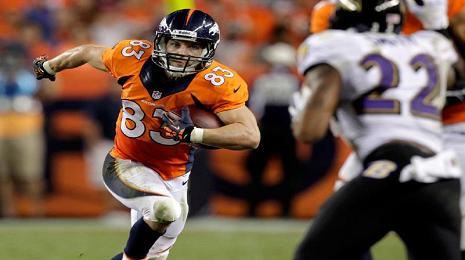 Earlier this week the Broncos voted Wes Welker, who is just two games and 12 catches into his tenure with Denver, a team captain.

I’d like to attend your Autumn Equinox party, but I have a Pryor engagement. Terrelle Pryor of the Oakland Raiders versus Peyton Manning of the Denver Broncos. In case anyone ever asks you to define “polar opposites.”

One thought on “IT’S ALL HAPPENING! Monday, September 23”