Me, I cheer for the Colorado State Ashrams.

On Saturday, a select few players from Georgia Tech and Northwestern, including Wildcat quarterback Kain Colter, adorned their gear with the letters APU, which was not an homage to a beloved character from “The Simpsons.” (“Mr. Simpson, a Mounds bar is not a sprinkle”). Instead, the letters stood for “All Players United”, a show of solidarity by players who want NCAA reform.

The campaign was launched by the NCP (National Collegiate Players Association), which was founded by Ramogi Huma, a former gridder at UCLA (“It’s always UCLA,” a frustrated NCAA legal counsel fumes). Anyway, that’s cool and all, but if the players truly want to send a message, they could refuse to take the field for five minutes at the start of a game. That would put a scare into Mark Emmert and the lads from Indy.

(One man’s –and Harris Poll voter’s– ranking of the eight best teams in college football…as always, based solely on on-field performance.)

Ducks’ “We’ll Cover The Spread” Offense meets a defense that is allowing 42 points per game. By the way, the nation’s leading passer plays in Oregon and his name is not Marcus Mariota. Yup, it’s Oregon State’s Sean Mannion. Next up, Cal.

The September Heisman fave is not even the most prolific quarterback in his own state right now.

The Cardinal were up 29-0 versus ranked Arizona State when David Shaw decided to download iOS7 and got a little distracted. Next up, at Washington State.

The Tigers remain the only team thus far to have beaten an opponent that was ranked fifth or above (No. 5 Georgia) at the time. Next up, Wake Forest (this’ll get ugly).

When your backup quarterback (Kenny Guiton) throws for six touchdowns — in the first half –, you have a solid team. Next up, No. 24 Wisconsin. If Jesus did have a jersey number, my suspicion is that he’d opt for No. 3.

Someone in Tallahassee is peddling “Jesus-themed” Jameis Winston T-shirts and the Seminole athletic department is not amused. “On the third down he rose again, in fulfillment of the scriptures…” Next up, at fellow garnet-and-gold clad ACC member Boston College.

So Tiger QB Zach Mettenberger’s mom works in Georgia’s football offices? Mark Richt has lost control of the secretarial pool! Next up, at No. 9 Georgia. 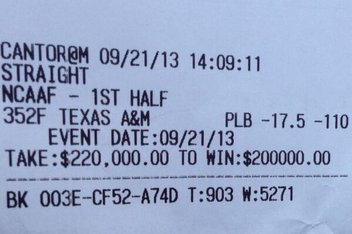 Mayweather earned a guaranteed $41.5 Mil for his bout with Canelo Alvarez earlier this month, so this wager represented 0.5% of that.

Boxer Floyd Mayweather thrilled about Johnny Football’s 29-point victory over SMU last Saturday. Actually, he was thrilled that the Aggies led 32-6 at the half, which crushed the 17.5-point first half spread, which netted the pugilist –and wagering– legend $200,000. Next up, at Arkansas.

The Pittsburgh Pirates clinch their first playoff berth in 21 years just one night after the Steelers lost to the Chicago Bears at Heinz Field by 18 points. In 1979 Sports Illustrated named Pirate first baseman Willie Stargell and Steeler QB Terry Bradshaw its Sportsmen of the Year, as both men had led their Steel City squads to championships. Sister Sledge deserved to make the cover, too, but were denied.

Since that year, 1979, both the Pirates and Steelers have only appeared in the playoffs in the same calendar year in 1992 (Steelers lost in the divisional playoff to the Bills, 24-3 and the Pirates–Francisco Cabrera, what more needs to be said?). Anyway, Yinzers, congrats on the postseason berth. Sorry to be such a buzz kill.

4. Brynn There, Done That

TMZ is reporting that former USC basketball player Brynn Cameron, who is the mother of former Trojan Heisman Trophy-winning quarterback Matt Leinart’s son, recently gave birth to a son sired by Los Angeles Clipper forward and former NCAA Player of the Year/No. 1 overall draft pick Blake Griffin. The baby’s name is Ford (not KIA?) Wilson Cameron-Griffin. Cameron, who was already receiving $15,000 per month in child support from Leinart per TMZ (which is correct more often than people give it credit for), is in line for another big pay day. Griffin earned more than twice as much in 2012 ($7.2 million to $3 million) than Leinart did.

Sabols’ 35 Emmy awards outnumbered the total that were handed out on Sunday night (in terms of categories, at least).

Anyway, the keen lads at Deadspin decided to monitor audience applause to see who received the most and least applause on Sunday night, and would you believe that both men (sort of) had sports affiliations. Jack Klugman, who played slovenly sports scribe Oscar Madison on “The Odd Couple” (an all-time top-five sitcom, and I shall brook no argument on this front) earned the most claps. The least clappage was given to Sir David Frost, but his image was the first to appear so maybe the audience was still in shock –and perhaps still recovering from that Carrie Underwood performance– but after that, no one received less clappage than NFL Films genius Steve Sabol.

(That sound you hear is former “Hard Knocks” producer and FOMH –Friend Of Medium Happy—Chris Corbellini tossing his Patriot helmet at the wall).

Is there a solution to this? Maybe during the preceding commercial the host –and next year it should be Will Ferrell and his three sons, no?– should ask the audience to hold its applause until after all the names are read?

One thought on “IT’S ALL HAPPENING! Tuesday, September 24”