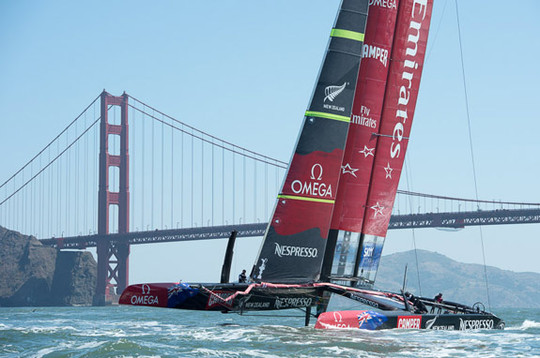 Lost at sea? The Kiwis (above) have lost seven races in a row to their American hosts.

The America’s Cup has taken such a dramatic tack in the past few days, one wonders if it is not…rigged.

One week ago in San Francisco Bay, Oracle Team USA trailed Emirates New Zealand eight races to one and appeared ready to bow out. Then they tried a different tack. Ever since, the crew that is bankrolled by billionaire Larry Ellison has won seven consecutive races –rendering the Kiwis regatta de blanked — and evened up the race for the “auld mug”, an event that was initially staged before the abolition of slavery (1851). One wonders whether Ellison gave the crew a stern lecture.

The deciding race, weather permitting, will be staged today and air on NBC Sports Network, which has made this absolutely thrilling television. Really. You should watch. The finale should be rudder chaos.

I should add that Team Oracle has actually already won 10 races to the Kiwis’ eight, but was docked a two-point penalty for cheating in last year’s America’s Cup World Series warm-up event. Really, America, really? )

Anyway, the America’s Cup, the oldest international sporting trophy (Brynn Cameron being the youngest) is now the venue for one of the all-time great comebacks in sports history. Experts are declaring this the most dramatic America’s Cup in the event’s 162-year history. Don’t be a jibe turkey: tune in. 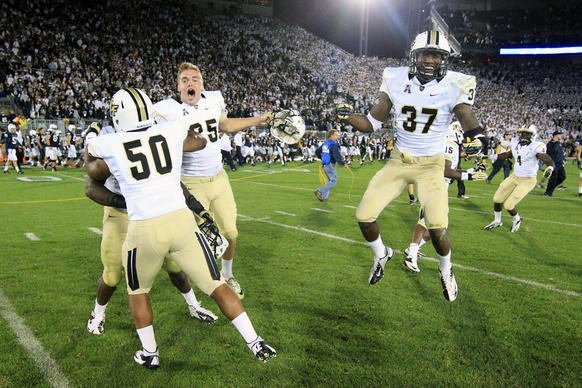 Two Saturdays ago Central Florida, a school that did not even exist when Joe Paterno became head coach at Penn State in 1966, beat the Nittany Lions in State College.

Do you remember the episode in Season 1 of “Happy Days” in which Richie Cunningham is “grounded for life” by his dad after being arrested for his participation in a midnight drag race? Of course you don’t–it was 1974, you weren’t even born yet. Anyway, it happened. But then Howard commuted the sentence to two weeks –after all, Richie was not even on Mollys when he broke curfew. 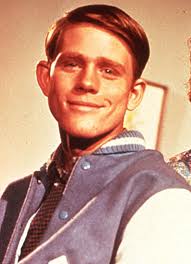 ANYWAY, yesterday the NCAA decided to roll back the overall severity of the punishments it handed out to Penn State more than a year ago. The football program, which is only allowed to mete out 15 scholarships annually now, will be allowed to dole out 20 next year and a full 25 the year after that. Also, its bowl ban may be rescinded.

“Due to Penn State University’s continued progress toward ensuring athletics integrity, the NCAA Executive Committee is gradually restoring football scholarships the university lost because of sanctions more than a year ago,” the NCAA said in a statement released yesterday.

NCAA grand poobah Mark Emmert, the man initially responsible for those punishments (which also included a $60 million fine), said, “It should not be seen as a precedent of handling other cases but in fact an
example of the uniqueness of the circumstances.”

Emmert: Objects in photo may be smaller than they appear.

Taken at face value, the NCAA’s pat on the back to the Nittany Lions, on their “progress”, can be construed as, “The school is no longer covering up the rapes of young boys by former assistant coaches.” Because, really, what else was Penn State the football program guilty of? That’s why this act of mercy by Emmert and his cronies is so hollow. Because instead of admitting its own culpability in this fiasco, the NCAA did the right thing but provided the wrong reason.

And the timing of it –Penn State losing at home to UCF while Beaver Stadium is not even filled up– is curious. That bald dude you see wearing the Cheshire cat grin is B1G commish Jim Delany. I imagine he twisted a few arms in Indianapolis.

We’ll give the final word to USC, which is still enduring sanctions for crimes far less injurious than the ones committed at Penn State. Tweeted coach Fire Lane Kiffin yesterday, “Congrats to coach Bill O’Brien and his team.” I don’t always love FLK, but I do on this one.

Monahan (left) and Baskin. I see a high-pressure system between the two.

This meteorological meltdown was brought to my attention by Jeff Pearlman.

Little Rock, Ark. Jeff Baskin (Fox 16) and Keith Monahan (KARK) provide on-air weather retorts (““Pay no attention to what some cajun who has married all 5 of his cousins at some point says…”) after disagreeing on the chances of rain on Sunday. That led to a challenge to “meet outside” and then everything got all gang-war-scene-from-Anchorman as members of both news teams allegedly entered the fray. Limited reports have produced no evidence of anyone being stabbed with a trident.

My favorite line in the story: “Monahan entered the weather center the two stations share while Baskin was reviewing his forecast and having mascara applied.” Nice touch. Kudos to SI for calling the breakout story of the 2013 NFL season a month ago.

Last night’s 6 p.m. ESPN “SportsCenter” was almost entirely devoted (it may have been entirely devoted, but I gave up after half an hour) the life and times of Denver Bronco quarterback Peyton Manning. See, later in the evening ESPN would premiere its latest doc, “The Book of Manning”, so SportsCenter chose to use its hour as an “18-chapter” overview of all things Peyton. See, cuz that’s his jersey number (one more reason to prefer Brett Favre…who, by the way, at age 43, says he’s in the best shape of his life).

That’s a whole lot of Peyton Manning after just three NFL weekends. Yes, he’s awesome. His alma mater named a street after him (Peyton Manning Pass… I wonder if they’ll ever name a road after their greatest defensive end and name it Reggie White Dead End…too soon?). He was the best SNL host of any sports figure and he will likely break every meaningful passing record in NFL history and is in the midst of the most prolific stretch of his career.

Got it. But why has Bristol, Conn., become Peyton Place? Could it be because the producers there have become so character-driven and that they don’t have Tim Tebow to kick around any more? And because Favre’s gone and RG3 has fallen off the radar? Might that be it? The ongoing Manning hagiography might just be an attempt to fill the void. 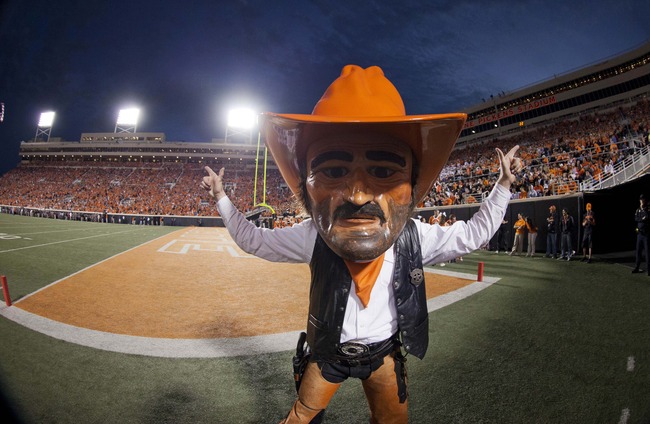 Pistol Pete: You have to love a mascot with a five o’clock shadow.

That website that “watches the watchers”, Deadspin, nuked Sports Illustrated’s five-part investigation of Oklahoma State, “The Dirty Game”, yesterday. Not only was Deadspin’s reports produced in less than two weeks –as opposed to the 10 months SI spent on its series —  but was also far more thorough and documented than SI’s.

Plus, you have to admire the cojones of Deadspin here. One week earlier it persuaded the magazine’s two principal editorial figures to engage in an on-line chat to clear the air about the controversial investigation. At the very same time Deadspin was already in the midst of its own investigation as to SI’s standards and practices in reporting the story. That’s both diabolical and brilliant or, in other words, very Deadspin of them.

“‘The Dirty Game’ was ultimately as shallow and cross-sectional as its reporting,” concluded the author, Dom Cosentino, who failed to disclose how many pairs of cowboy boots he wore out while reporting this piece. “SI couldn’t use individual grievance to illuminate the university’s failings—and, ultimately, show how those are rooted in the conceptual bankruptcy of amateurism—because it had hardly investigated the university.The magazine couldn’t describe the pathologies, mechanisms, and structures of power because it had barely looked into them.. At the exact point where the hard work started, SI stopped.”

Non-troversy Alert: Kevin Durant versus Dwyane Wade. It’s a list composed by an editor who probably cannot make more than four out of 10 free throws. Who cares?

Ted Cruz: Definitely not as chill as Taio Cruz. The senator from Texas (of course) has the rest of his colleagues throwing their hands up in the air sometimes saying, “Ay-o, gotta let go.” Filibusters are just democracy’s answer to hiding the keys to the liquor cabinet.

Wacha Wacha Wacha: Fozzy Bear’s favorite pitcher, rookie Michael Wacha of the St. Louis Cardinals, comes within one out of hurling a no-hitter last night against the Washington Nationals. He’s only 22, but even Statler and Waldorf approve of him.

Okay, I’m guessing here. I believe that NBC Sports Network, which aired live coverage of yesterday’s regatta, will do so again today. The added viewer benefit is that it preempts “The Crossover.” So there’s that. Anyway, tune in.