That threshold carry should be something to see.

Some might say they found love in a hopeless place…the 31 inches that roughly separate their lips. On the other hand Sultan Kosen, who at eight-foot-three is, according to the Guinness Book of World Records, the world’s tallest living human, does happen to be tall, dark and handsome. Kosen, of Turkey, wed Marve Dibo, who is five-foot-eight, because he has never heard of the WNBA.

2. The Return of Golden Tate Warrior 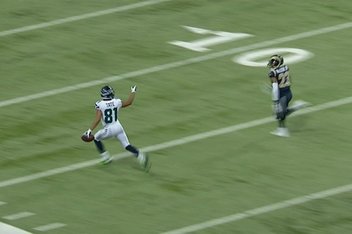 Seattle wide receiver Golden Tate, who last year made the most infamous catch, a.k.a. the “Fail Mary”, on Monday Night Football in ages, scored the only two touchdowns in last night’s 14-9 MNF win for Seattle. At the end of his second TD grab, an 80-yard bomb from Russell Wilson, GTW taunted the Rams secondary some. Nothing new for anyone who watched him play at Notre Dame.

Two best Golden Tate TDs. The first, after the go-ahead score versus Michigan State in 2009, when he launches himself directly into the Michigan State band. The second, later that year, when Tate takes a crushing shot (1:40 mark of video) from USC safety Taylor Mays, who at the time had a rep as the college game’s most notorious head hunter, as he hauls in a short TD pass from Jimmy Clausen. Not only did the Weebles-built Tate not fall, but he stared at Mays, who did fall, as he casually flipped the football as if to ask, “That all you got?”

FYI: Listeners to my podcast, The Grotto, heard former ND QB Evan Sharpley inform us that as a freshman Tate always line up on the side of the Notre Dame bench so that the coaching staff could tell him what route he needed to run.

3. From Velvet Underground to Under Ground 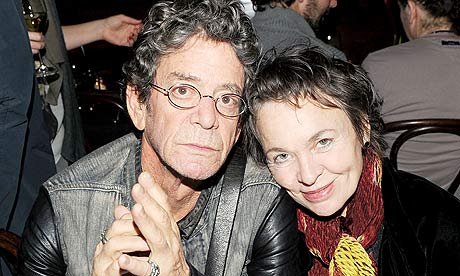 New York native Lou Reed, whose music was inextricably woven into the rock-and-roll fabric of this city, died over the weekend at the age of 71. The culprit: liver disease. Besides his work with The Velvet Underground, Reed gave us “Walk on the Wild Side” and “Dirty Boulevard”, two songs you will hear on any jukebox at any dive bar in the Big Apple if you stick around for three beers. Lou Reed gave the world those two songs spent his last hours in his home in Amagansett, Long Island, with family before succumbing to that ol’ mortal coil. Not bad. Not bad at all.

My favorite, most haunting song that Reed was involved with is “Femme Fatale”, here sung by the gorgeous Nico. REM covered this tune as well as “There She Goes Again” on their album “Dead Letter Office.”

Classics include “Femme Fatale”, “There She Goes Again”, “I’m Waiting For The Man” and “Heroin.”

For the past two decades, and this is no secret to any male who follows the NFL or has access to the web, the Denver Broncos have stock-piled cheerleading talent as if Nick Saban were recruiting for them. Either that or they simply air-brush the portraits better than any one else. Perhaps both.

Anyway, there are currently three former Broncos cheerleaders working as on-air reporters. The most visible one is Michelle Beisner of the NFL Network, who is engaged to FOX broadcaster Joe Buck (the two met at last year’s Super Bowl…could this explain the power outage in the third quarter?).

Beisner, who spent six years with the Broncos squad, the last four as a captain, is not the only one. Lauren Gardner, a reporter for CBS Sports Network, grew up in Denver and was a member of the squad while a student at the University of Colorado.

Herlocker did not marry Brian Urlacher, though the hyphenated surname would be awesome.

Anything wrong with this? Hardly. It’s no more sexist than putting Kirk Herbstreit and Jesse Palmer on camera.

5. Brazil, Antarctica, Scotland (Need it, Got it, Got it)

Scotland’s Isle of Skye. I’d have kilt to be there this summer.

Here’s The Lonely Planet’s guide to the top 10 destinations for 2014. I can attest to Antarctica and Scotland, the latter being my favorite place I’ve ever visited –and I’ve been to Youngstown, so there.

One thought on “IT’S ALL HAPPENING! Tuesday, October 29”