What’s left for Kobe outside of chasing Jordan’s scoring mark?

Derek Jeter, 39: Fractures ankle during 2012 playoffs, spends entire offseason in arduous rehab and does not return until after the 2013 season has begun.

Kobe Bryant, 35: Ruptures Achilles tendon during 2013 playoffs, spends entire offseason in arduous rehab and does not return until after the 2013 season has begun.

Jeter: Reinjures himself in his very first game back and played a total of 17 games in the 2013 season before shutting it down.

Kobe: Suffers a stress fracture just five games into his return and will now miss a projected six weeks.

Jeter: His first season was 1996 and he was a unanimous choice for Rookie of the Year.

Kobe: His first season was 1996-97 and at the time he was the youngest player in NBA history to start a game. Won the NBA Slam Dunk Contest that season.

Jeter: Five championship rings and has played his entire career with the most iconic club in baseball, the New York Yankees.

Kobe: Five championship rings and has played his entire career with one of the two most iconic clubs in basketball, the Los Angeles Lakers.

Jeter: His favorite manager, Joe Torre, played for the New York Mets in the 1970s and is a Hall of Famer, but left a few seasons back.

Kobe: His favorite coach, Phil Jackson, played for the New York Knicks in the 1970s and is a Hall of Famer, but left a few seasons back.

Jeter: Shared the stage with a prima donna who thought HE was the alpha dog, or at least demanded to be treated that way, but rarely acted that way in the big games.

Kobe: Shared the stage last season with a prima donna who thought HE was the alpha dog, or at least demanded to be treated that way, but rarely acted that way in the big games.

Jeter: Has surpassed 3,000 hits (3,316) and is now in ninth place all-time (though some people STILL claim that he is overrated). Has a fair chance, if he can remain healthy, to climb into the top five.

Jeter: Will never win another championship wearing that uniform.

Kobe: Will never win another championship wearing that uniform.

If you were around in 1979, you distinctly recall the storming of the U.S. Embassy in Tehran and the Americans inside being taken hostage. And held hostage. Days turned into weeks turned into months turned into more than a year. At some point during the proceedings ABC put a young news anchor with an authoritative voice on the air each night after your local news to provide an update.

The anchor was named Ted Koppel and the show, which each night began by informing us what day the hostage crisis has now passed on to, would become “Nightline.” For the record, and only because it’s such an easy number to recall, I can tell you without Googling that the hostages were freed after 444 days –the Iranians waited until just minutes after Ronald Reagan had been inaugurated to liberate them, one final flipping of the bird to outgoing President Jimmy Carter. Death to the Shah!

Well, yesterday, December 19, marked the 100th day since Sports Illustrated published, on its website, the first installment of its five-part series, “The Dirty Game.” And while one of its co-authors, Thayer Evans, made a brief public appearance afterward with SI’s Maggie Gray (I imagine this is what most of us would look like after an all-night bender with A.J. Daulerio, by the way), he has not been seen or heard from publicly since.

His most recent story for SI? It was that one.

My memory is somewhat foggy, but in my days at the magazine the only senior writer that I can recall being permitted to go 100 days without a byline was Gary Smith.

So, having crossed into the triple-digit mark, it is time for us to be resolute in our vigil. Where is Thayer? SI assured the media back on September 13th that Thayer had not been fired, but that’s the last item that you will see that has been written about him. Even Ed Sherman, who wrote an excellent piece this morning on his website about the media year in review, neglected to mention Thayer.

“There is no Markinson.” 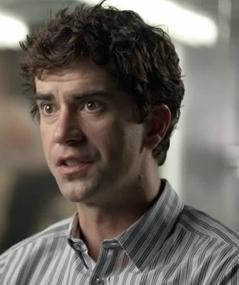 Has Thayer Evans gone Markinson? Or is Thayer Evans SI‘s own version of Jerry Dantana? Or is he working on yet another months-long investigation that none of us are privy to (and, truth be told, almost none of SI’s editors would be privy to, either) and we will see the fruits of his sleuthing in the new year?

Unless it’s the final option, isn’t it a little odd to employ a college football/basketball writer, pay him a six-figure salary, and never have him write during college football and basketball season? And isn’t it odd that this writer never even tweets any more, has virtually disappeared from the social media landscape? And has everyone else (outside of Stillwater)  just forgotten about him?

Last night Jon Stewart staged a one-night reprieve from skewering Fox News in order to open The Daily Show with a tribute to cheeky departing correspondent JoPhn Oliver. The wonderful Brit is headed to HBO to do a weekly news show which, granted, will mean a bigger pay day. However, I don’t think he’ll ever achieve the cultural relevance that he now has, where he may appear multiple nights per week.. It’s like Howard Stern moving to Sirius. You’re happy for him, but he’s no longer part of the daily conversation.

The San Antonio Spurs had back-to-backs this week, on the road, versus two young and frisky Western Conference foes: Phoenix and Golden State. On Wednesday night the Spurs took down the Suns in a close affair, 108-101, but that’s the advantage of having three future Hall of Famers in you lineup.

Last night, in a nationally televised game on TNT, coach Gregg Popovich chose to rest those three players: Tim Duncan, Tony Parker and Manu Ginobiliiiiiiiiiiiiii (Charles Barkley, understandably, was bummed). So of course a Spurs lineup with mostly second-stringers led throughout almost all of the second half and made the key plays in the final minute to defeat the Warriors, 104-102.

Two games, two wins, and a complete testament to the fact that Gregg Popovich is the best coach in professional sports today. Easily.

As someone said on Twitter, “Astro is rolling over in his grave.”

These four minutes illustrate why “Inside the NBA” is by far the best studio show in sports. It only took two minutes after Sir Charles committed the best malaprop in memory (“Leroy Jetson”), and certainly an unscripted one, for the producers to cue the theme music to “The Jetsons” and conjure a black-faced Elroy Jetson. And watch Shaq as he loses it. Also, fifteen minutes after Chuck’s verbal infraction, “Leroy Jetson” was trending on Twitter.

In no way should Boitano’s declaration affect the reverence that Stan, Kyle and Cartman feel for him.

One thought on “IT’S ALL HAPPENING! Friday, December 20”