Masahiro Tanaka will cost the New York Yankees $175 million, or more than C.C. Sabathia. Is he worth it? Well, he has won his last 26 decisions and his ERA has been 1.27 two of the past three seasons (it was 1.83 in the third). Is he worth it? Fellow Japanese pitchers Hisashi Iwakuma (3rd in ERA in the AL) and Yu Darvish (4th) have been for Seattle and Texas. So has reliever Koji Uehara ( a 0.57 WHIP, which is ree-dick) for Boston.

Doubters (ahem, Keith Olbermann) will point to Hideki Irabu or Kei Igawa. Fair. But what about Chien Mien-Wang and Hiroki Kuroda, the latter of whom has been the Yanks’ best starter the past two years?

Embiid, a native of Cameroon, began playing basketball at age 16. Now the seven-footer is seen as the next Olajuwon.

The Wooden Award Midseason 25 list was released yesterday and whose name was not among the 25? That of Joel Embiid, freshman center for the Kansas Jayhawks, who is currently the No. 1 overall pick in ESPN’s latest NBA mock draft. Remember, it was not even three months ago when a certain publication put another Jayhawk frosh on its cover with the line “From Wilt…to Manning…to Wiggins.”

Ward reporting from the remains of Tau Kappa Epsilon fraternity of the campus of ASU.

The latest face in morning news could be around for awhile. Meet Clarissa Ward, who joined firmly in third (fourth?) place CBS This Morning recently to share the circular desk with Charlie Rose and Gayle King. Rose , King, Ward. You must have four letters to sit there, I guess.

In consecutive nights the Oklahoma City Thunder take down the top two teams in the Western Conference (other than themselves), Portland and San Antonio. Kevin Durant scores 46 and 36 in the games and in the past 11 games he is averaging 38.1 points. A superstar in his prime. How lethal will OKC be when Russell Westbrook returns?

Old-timers such as myself prefer Durant’s game to LeBron’s because he does not play football/basketball. When LeBron cannot hit his shot, he just palms the ball before his first step, then drives to the hoop like Jim Brown, in search of contact and well aware that no ref will whistle him for a charge. Durant plays the game the way those of us who were raised on Dr. J and Havlicek and Pistol Pete and Rick Barry played it. They were artists, not bulls.

Stock in Netflix leaped nearly 18%  ($58.27) after hours yesterday based on the company’s quarterly earnings report. A year ago yesterday you could have had a share for $96. Today it’s nearly four times that, at $389. The lesson, as always: Never bet against Robin Wright.

The term “thug” originated in India, from the Hindi or Marathi “thag”, which was loosely translated as “ruffian.” To my knowledge a native-born Indian has never played a down in the NFL. Just something to consider. 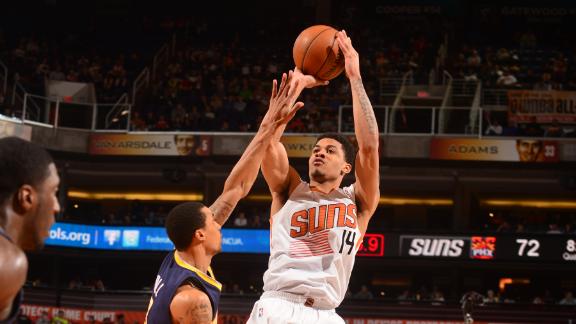 Gerald Green had a team-high 23. The Suns have played the majority of the season minus Eric Bledsoe and Emeka Okafor, two of their premier players.

The Phoenix Suns hand the NBA’s top team, record-wise, the Indiana Pacers, their worst loss of the season: 124-100. It’s also the most points that anyone has scored on the Pacers. Jeff Hornacek’s team has already won as many games a the team’s midway point of the season (24-17) as most people thought they’d win all year. The Suns are now officially on everyone’s radar.

Six Suns scored in double figures, which is just the way Hornacek likes it.

They’re not booing, they’re yelling, “Fiiiiiiiiiiiiiiiiiiire!” Bruce Springsteen’s son, Sam, 20, joins the Colt’s Neck, N.J., Fire Dept. As a former Monmouth County resident myself, I can tell you that Colt’s Neck is fairly swank. Lots of horse farms. The kind of place where Pie O My would live. And what happened to that filly?

By the way, Springsteen has recorded “Streets of Fire” and “I’m on Fire”, but he also wrote the Pointer Sisters hit “Fire.”

A fantastic piece in Outside magazine about what it is like to freeze to death. Because it’s January and it’s not Inside magazine. Recommended reading for the Broncos and Seahawks.

Walsh, like Frisch, attended Fordham. His thick brown locks also place him in the Hall of Mane.

Charles Gardner Radbourn won a Major League-record 59 games in 1884 and did not even make the cover of Sports Illustrated. Retired with 309 wins, 24th-most in MLB history.

Last Night: Took Oklahoma minus-14; they won by eight.

Tonight: Sitting this one out. 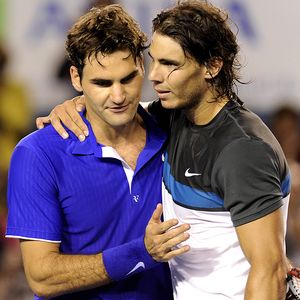 Brady-Manning and Federer-Nadal in the same week? Yes.

Get up early, or stay up late, to see the two best men’s tennis players of the past decade (ever?), Roger Federer and Rafael Nadal, meet in the semis. Knowing these two, it’ll go five sets, so you can probably sleep in until at least 5:30 a.m. Currently Federer has 17 career grand slam wins, Pete Sampras 14, and Nadal 13.