Something old, something new, something borrowed, something Blue Ivy’s parents. Robin Thicke and Chicago.  Macklemore and Madonna. Carole King and Sara Bareilles. Daft Punk and Stevie Wonder. Blake Shelton with Willie Nelson (who was old when I was a kid). Notice a theme from last night’s Grammy’s?

Also, you had Sir Paul McCartney reuniting with Richard Starkey…Pink du Soleil…the fetching Kacey Musgraves, Jamie Foxx beign his “I’m Jamie Foxx so I’m going to hit on the hottest woman in the room even if she IS Jay-Z’s wife” moment… and Queen Latifah is a wedding minister.

All in all, a fantastic show. I don’t know how you improve on this outside of not subjecting viewers to Cindy Lauper’s accent. “In your face, dog lawyer.”

Kate McKinnon is in her second full season at Saturday Night Live, which with this year’s cast makes her a veteran. McKinnon, with those crazy eyes, turned 30 last month. She’s the best female performer on the show, but it wasn’t until Saturday night that she had a truly memorable character: Olya Povlatsky.

Sure, it’s distaff version of Borat, but it was still solid. Lots of gems here — “I mean, how did the Olympics pick Russia? What was the other options: Haiti or middle of ocean?”

Always underrated in these bits: Seth Meyers’ talent as a straight man. But NBC would do well to sit Olya down with Bob Costas for a fireside chat or two during the Sochi Games.

3. The Gospel According to Rust Cohle

Am I the only one who thought our initial peek at Ledoux was straight out of that Sasquatch footage?

So it looks as if we’ve got our prime suspect in “True Detective”, one Reginald Ledoux, a man who favors stalking around in his backyard, swinging a machete while wearing nothing but his tighty whiteys and a gas mask…although if that’s a crime, lock me up, sheriff.

Three episodes in –the show is on hiatus next week to avoid SB XLVII — and nothing is better than one of Rust Cohle’s occasional sermons to his partner, Marty, on the human condition. Last night’s, on the typical demographic at a tent revival: “I think it’s safe to say that nobody here’s gonna be splitting the atom, Marty.”

Hart: “Can you see Texas from atop your high horse?”

Marty is learning to counterpunch, I see, at least rhetorically.

All I know is we’re going to have more scenes with Charlie (“Like she could duck hunt with a rake”), so I can’t wait.

Oh, and by the way, Rust: Marty wants to mow his own lawn.

4. What the Cyclones Blew In

Both Fox and Carroll have roots in Ames.

Both Super Bowl coaches, Denver’s Fox and Seattle’s Carroll, once worked at Iowa State. By the way, once coach is a silver fox and the other is a silver Fox, no?

Meanwhile, I can step out the front door of my apartment, be at the Hudson River in less than a minute (walking), and then walk about a mile and a half south along said estuary this week and be here. Which is why I’ll be headed in the opposite direction.

So, yeah, what’s the big deal?

Two dozen of the world’s premier surfers are invited to head to one of the world’s most famous breaks –Mavericks, about two miles off-shore from Half Moon Bay, near Santa Cruz– and given about 48 hours’ advance notice. The competition took place last Friday in 55-degree water –the short notice is on account of organizers waiting for optimal conditions, and the contest was not even staged in 2011 or ’12. The winner, a 40 year-old South African named Grant “Twiggy” Baker, only took home $12,000. But it’s all about the bragging rights.

If you enjoy watching precociously talented kids sing on YouTube, check this out. This young lady has spent A LOT of time alone in her room listening to music. But she’s gifted. And here’s a more well-known duet performing that tune.

So they’re playing hockey outdoors in Los Angeles this week and football outdoors in New Jersey? Sure.

The Tribe Has Spoken

So I caught “Lone Survivor” the other night and it was, as expected, gripping. A few things that take place in the film that did not take place in Marcus Luttrell’s memoir:

1) The scene in which the Taliban villain comes within a moment of decapitating Luttrell. Never happened, at least according to Luttrell’s own published account.

2) The final battle in the village. Again, never happened.

3) The entire cast dancing at the train station in a musical number as the closing credits roll–oh wait, wrong film.

4) The rattlesnake moment. Never mentioned in the book, but hey, director Peter Berg was probably weaned on the same Disney movies I was. Any Disney film that took place in the wilderness in those days always had at least one rattlesnake scene.

Still, the movie is otherwise very faithful to what was an incredibly compelling and harrowing episode in the history of the U.S. Navy SEALs. The combat footage, the locations, if you’ve read the book, it’s pretty much how you imagine it. I wondered why they felt the need to ever stray from the truth, with the lone exception being that I realized they’d need to condense Luttrell’s time in the village.

Also, I spotted Luttrell in cameos in at least three different scenes. That was a little…strange. One scene? Sure. More than that, if you know who he is, it’s a little awkward.

I’m fascinated by the story and in awe of the men who perished. Truly the best of the best. But I’ve noticed that in just about every interview Luttrell does, he has absolutely no patience for anyone in the media who dares to ask an honest, legitimate question. Here he is with Jake Tapper of CNN, who seems to be trying his best to show respect for the men while asking legitimate questions about the mission.

For instance, you can ask how come they didn’t take the goatherds hostage, hike them out with them until they were able to establish radio contact, wait for the Chinook, and then set them free. I’m sure there’s a good explanation for that, but Luttrell’s attitude has been simply to pounce.

It becomes clear that Luttrell will always be dealing with this incident in his head. And who wouldn’t be? 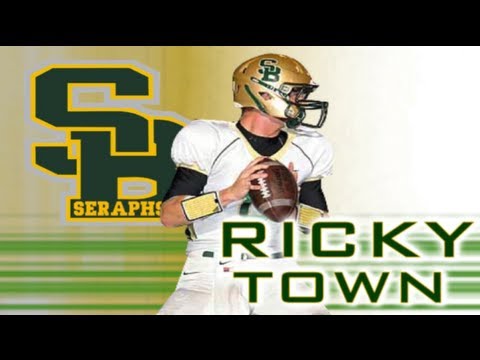 Dan Jenkins himself couldn’t give a Southern QB a better appellation.

So here’s my question: If a “:SportsCenter” anchor reported on the quarterback decommitting from Alabama in order to attend USC, could he pay homage to both Chris Berman AND Steve Levy simultaneously by referring to him as Ricky “Get Outta” Town? Don’t cry for Saban. Yesterday Alabama picked up Florida State second-string quarterback Jacob Coker, who will graduate in May and thus is eligible to play immediately for the Crimson Tide. Oh, and Coker attended the same high school as A.J. McCarron.

Kobe Bryant on Carmelo Anthony’s 61-point game at MSG on Friday night, which broke the venue record Kobe had set a couple years ago: “If I were a competitor, I’d note that Melo’s had a lot more chances to break that record here than I have…but I’m not a competitor, so I won’t mention it.” Never change, Mamba.

Today we induct a pair of sweet-swinging left-fielders.

The Falls Classic: Few Major Leaguers have had a more spectacular demise than Delahanty.

Even if Delahanty did not hit over .400 in three different seasons and put up the fifth-best batting average in Major League annals (.346), he might merit induction simply for the way he perished. On July 2, 1903, as the Senators were on a travel day through upstate New York, Delahanty, 35, became drunk and belligerent. He began chasing teammate Highball Wilson (love that name) throughout the car with a straight razor. Delahanty was booted from the train, and later that night –the details are sketchy — he plunged into the Niagara River and went over Niagara Falls.

In 1929 O’Doul batted .398 with 254 base hits for the Phillies, and no National Leaguer has topped either of those numbers since. His .349 career batting average is fourth on the all-time list, behind only Ty Cobb, Rogers Hornsby and Shoeless Joe Jackson. Yet another Plumlee at Duke. This one goes by Marshall.

There are two Dukes, because few teams resemble themselves away from their home court less than the Blue Devils do. The Coach K’s have only played three games on other team’s courts and are thus far 1-2. Also, at 9 p.m. No. 11 Oklahoma State visits No. 25 Oklahoma on the 10th anniversary of the plane crash that claimed 10 members of its team and staff.

One thought on “IT’S ALL HAPPENING! Monday, January 27”