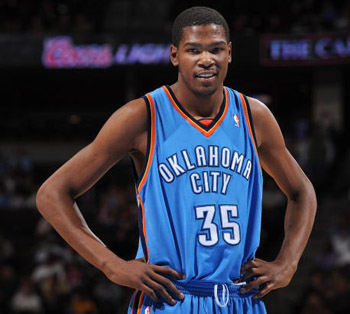 Strangely, only the Boston Celtics, a team that OKC has played twice this month and which has one of the worst records in the league, has escaped KD’s wrath: He went for 21 against them onJanuary 5th in OKC, his low output of the month, and he did not suit up against them last Friday in Boston.

Brad Stevens, what is your secret?

Love is the only All-Star whose last name also appears on the front of his jersey.

By the way, Kevin Love, who like Durant was born in the month of September, is six-foot-ten, left school after one year, and is named Kevin, scored 31 last night in a win at Chicago.

Durant will be the MVP while Love, who is fourth in the NBA in scoring and second in rebounding, will sate his ego by knowing he is the league’s second-best Kevin.

2. From Olbermann to Today

Despite having foisted Rob Parker upon us, Horowitz is still considered a brilliant mind by John Skipper et al.

Jamie Horowitz is a smart guy.

I seem to recall him interning at Sports Illustrated for us when he was still a student at Amherst. He may have even turned down a job offer from SI to take an entry level gig at NBC Sports. I think so.

So yesterday Deadspin broke news that Horowitz, credited with creating shows such as “SportsNation” and “First Take” (I said he was a smart guy; I never said your TV is a better place for him having been here), may be headed to NBC to oversee the Today Show.

Good timing award: the news broke on Keith Olbermann’s 55th birthday (“So I’m no longer part of the target demographic?”). Horowitz is the executive producer of “Olbermann.”

A few curious notes: Horowitz is credited with hiring Michelle Beadle and turning her into a star. Those two should really meet for drinks at the steakateria (a regular Beadle haunt) to discuss the Peacock. He’s leaving ESPN for there just as she returns to NBC after a brief but turbulent ride.

Second: if Horowitz departs, his No. 2, Kevin Wildes, will take over. And Horowitz will have to agree not to poach. Which is funny, since Wildes’ brother-in-law is Willie Geist, who may one day just succeed Matt Lauer as Today’s host.

Wildes interviewed your author for a position on “Olbermann” last summer. He described this site as a “living resume.” Horowitz even entreated audition copy. I never heard back from either of them, though.

3. What Have You Done For Me Tomorrow?

Did you really want to see a photo of an iPad Air here instead?

Is Apple now forbidden fruit? As a stock (AAPL), that is?

Yesterday Apple reported earnings after the market closed. The company beat expectations on earnings and reported that it had sold 50 million iPhones in the fourth quarter. And somehow it dove more than 8% in price after hours (from $550 to $508).

Think about that. Apple basically just had Robinson Cano’s 2013 season and the market just offered it an 8% cut in salary because it doesn’t think he can repeat it. Extrapolate 50 million iPhones over a year and then ask yourself, What other company could sell 200 million units of a product that retails for more than $400? Who? Anyone?

It’s a little more complicated than that, of course: margin, expectations going forward, emerging markets, etc. Still, as I tweeted last night, AAPL is Kate Beckinsale seated alone at a bar, watching as guy after guy walks past her for hours in an attempt to get Cathy Griffin’s number because they think that she’ll one day have more potential. It’s whack.

This dude takes an existential view of it all in a story entitled “Apple Proves That Our Society Stinks.” Personally, the entire dive in stock price may just be due to that giant window shattering in its trademark store across from The Plaza last week, no?

And, full disclosure: I own AAPL and cannot wait to purchase more.

Her subscription to Architectural Digest made her a perfect match for Ted.

For its 200th episode, “How I Melt Your Mother” gave viewers an unadulterated 30 minutes of life in the world of the future Mrs. Mosby. Am I the only one surprised at how closely she resembles Lily? Almost a mash-up of Lily and Robin, even. Weird.

So it’s Cristin Milioti (I think a few of us were hoping for Alexandra Daddario), who is better-known around these parts as having been the female lead in the Broadway version of “Once.” If you’re keeping track, then, she’s played characters who are formally known as “Mother” and “Girl” in the credits.

Although, as Jason Segel revealed, Mother could just as easily have been Hillary Clinton. So, some Aussie boys went swimming in croc-infested waters at the Kakadu National Park in Australia (I’ve been there; it’s primeval) and one of them didn’t return. Which is terrible, of course, for the boy and his family. It’s also what the croc would refer to as dinner.

The aftermath: officials at Kakadu are shooting every large croc and examining its stomach contents –cuz that’s going to help –while some idiot posted a headline that read “Killer Croc Snatches 12 Year-Old.”

Don’t you love how people attribute anthropomorphic ideals to wild creatures? As if the croc is just the latest fugitive from the law? It’s a wild animal, people. It eats to survive. And if you go swimming in its pantry, well, I’m sorry, but that’s Darwinism.

Today you must be this short — 68 inches or less– to be inducted.

The sport’s first 300-game winner, the five-foot-eight Galvin is No. five all-time in victories with 365. Granted, it was a different era (“Pitch count?!?”) but Galvin pitched 646 complete games –only Cy Young had more– and had ten 20-win seasons. Also was the first Major Leaguer to throw a no-hitter on the road.

More renowned as a manager, and deservedly so since no National League manager has more career wins than his 2,583, “Little Napoleon” (kind of a redundant sobriquet) had a career on-base percentage of .456. Only two men had a higher OBP: Ted Williams and Babe Ruth. Not too shabby. Had a .334 lifetime average.

Ethan Wragge: “Don’t think, just shoot.” These, kids, are words to live by.

Michigan State at Iowa may be the closer matchup, but you owe to yourself to watch Creighton’s Doug McDermott and Ethan Wragge as much as possible. The Bluejays not only lead the nation in most three-pointers made, they also lead it in highest three-point FG percentage. That’s impressive. Omaha!