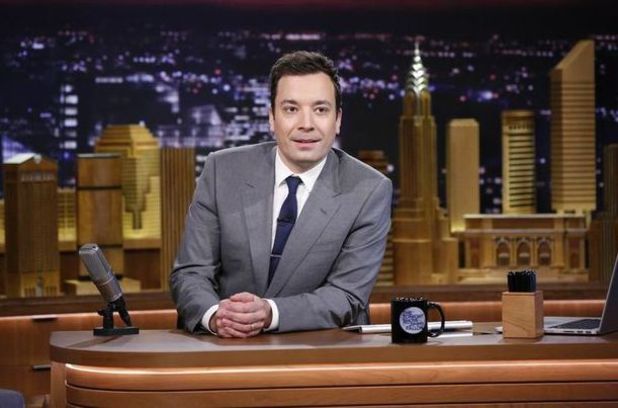 The Chysler Building gets big play on the new set. As does, by extension, the borough of Queens.

I wrote about the premiere episode this morning, but allow me to reemphasize how much work Fallon needs as an interviewer. A suggestion: watch clips of old Carson interviews to learn timing. Johnny never worried about waiting a beat for his guest to respond. An interlude of silence, even for a second or two, never detracted from the moment. In fact, sometimes the silence and Carson’s allowing it to get just a tad uncomfortable for the guest WAS the moment.

It’s something that Fallon, and Conan O’Brien as well, have never appeared to understand.

Also, interesting how Will Smith noted that Fallon genuinely wants to make people happy, that he is nice, and I agree. But then in the next segment with U2 Fallon, more out of nervousness than wickedness, told Bono that he could give a great speech about anything and asked him to speak about a coffee cup. He didn’t realize it in the moment, but it was patronizing. It was belittling all the causes that Bono feels so passionately about. And, in a brief moment of candor, Bono said, “Well, that’s not nice.”

As @nd_fredo noted, this was Fallon telling Bono to “sell me this pen.”

But, because Bono is Bono and not an ass, he gave it a shot. You could tell that he didn’t want to do it. I don’t think that moment was staged. It was Fallon’s big miss on an otherwise terrific opening night. My favorite read of the past few years is Laura Hillenbrand’s Unbroken, the true tale of Louis Zamperini. If you don’t already know his story, Zamperini ran in the 1936 Olympics, met Hitler, then had his plane shot down during World War II and survived with a buddy for 43 days in the Pacific Ocean. And then things really got hairy.

Zamperini, a USC alum, is still alive and there’s a great photo of him snuggling with the director of the film that is being released based on the book, Angelina Jolie. So, yes, he really did have something to live for. Fight on!

Here’s a trailer/video that made its debut during NBC’s Olympics coverage on Sunday evening.

4. The Devil and Marty Hart Let’s get past the obvious pun: Marty Hart and Mardi Gras. Not that “Hart” and “Gras”, which means fat, are related, but I wondered if that’s where Louisiana bayou native Nic Pizzolatto drew the inspiration for the detective’s name. True Detective is a can’t-put-it-down novel played out over eight –really, nine-Sunday evenings. And Pizzolatto enjoys layering his story with clues and potential red herrings. We’re five episodes through and anyone who tells you that they know how this is going to end is fooling themselves.

Consider Hart: He’s the one guy I was sure is innocent (and I still believe he is). But the modern detectives are chasing Cohle. But, as a Twitter follower, @keepsbreakndown, noticed, Marty has twice sabotaged chances Rust had to collect more evidence: first, when he called him to the police car to inform him about Reggie LeDoux, which prevented Cohle from entering the school. And second, when he shot Ledoux in the head, thereby pulling a Jack Ruby.

And you can make a case that Marty hates prostitutes: see how he hands a minor a large bill and tells her, “Do something different.” (or maybe he just bet her that she’d never host The Tonight Show). Also, Marty has twice had the opportunity to hand the case to the task force but he’d rather keep it with him and Rust.

On the other hand, it was Marty who found the church at the end of Episode 2. And even in both moments when he sabotaged Cohle’s chances, we are led to believe that he honestly had no guile about his actions.

Listen, this show is a masterpiece. So much texture here. Every moment develops or reveals character. Like when Rust asks Marty if he has ever hunted. Marty answers affirmatively, and then Rust demeans Marty’s version of hunting (“sitting in a tree blind as your bait lures the deer”) to real hunting, tracking game. And Marty calls him an asshole. Note how far we’ve come: Marty may still not appreciate Rust’s lack of tact, but he has come to accept that he is in the presence of a superior detective, if not person.

And then there’s the cinematography by Adam Arkapaw: the cobalt-blue bayou at night as Marty drives to the rave. The reflection of Cohle in the window as he walks out on Maggie in the diner. The angry gray sky behind Rust as he revisits the scene of the murder seven years later. It’s all brilliant.

My guess, and that’s all it is: Rust’s burnout mode is itself a cover. He thinks he knows how far up these ritual killings go and he’s decided to go rogue. Are he and Marty still in communication? After all, Marty only owes him his career and avoiding a murder charge. If so, then Cohle would have briefed Marty in the five days between their respective interviews.  I noticed the time stamps on those interviews very early. We were always supposed to know that they got to Rust first.

Finally, consider how far Pizzolatto goes to include moments that he finds fun or mysterious. The scene in Episode 3 where Rust borrows the lawn mower? Why would a guy who lives in an apartment complex need a lawn mower? But it allows for the whole “I like mowing MY lawn” scene, which is a call-back o something Woody Harrelson said in “Kingpin”, a movie from 20 years ago. Just something to think about.

Thanks to @okerland for noticing that the highest-scoring game in NBA All-Star history (163-155, or 318 points)  involved players wearing full shirt sleeves. I do believe we can have a 200-point score from one team next year if they just wear long flannels.

My idea for next year: a 12th-man All-Star Game, pitting the 12 best 12th men from the East versus the West. An even more Darwinian idea: the league’s 12 worst 12th men –all of whom having been with their teams since start of season –versus a D-League All-Star team.

When he retired in 1950, “Old Aches and Pains” was baseball’s all-time leader in games played (2,422) and double plays involved in. He hit .388 in 1938, his best season, and for his career struck out less than once every 19 plate appearances.

“Crab” was due to the fact that he was baseball’s first exo-skeletal player?

One thought on “IT’S ALL HAPPENING! Tuesday, February 18”