Alex will sit the rest of the Olympics out.

Russia, your Olympic hosts, were bent on revenge against Team USA in hockey, meeting them on home ice in an Olympics for the first time since the upset in Lake Placid in 1980. Instead, they lost last Saturday in shootout thanks to an unmoored goal –and, perhaps, to an assiduous-to-a-fault referee. And then they lost earlier today to Finland, which means that the Russians, with arguably the world’s greatest current hockey player, Alex Ovechkin, on their side, will not even advance to the medal round.

Russian coach Zinetula Bilyaletdinov, who was a defenseman on that 1980 Russian squad, was understandably out of sorts after Thursday’s defeat. A snippet of his exchange with reporters, per The Wall Street Journal:

Q: What future, if any, do you see for your own work and for your coaching staff? Because, you know, your predecessor was eaten alive after the Olympics—

A: Well then, eat me alive right now—

Q: But we have the world championship coming up!

A: Well then, there will be a different coach because I won’t exist any more, since you will have eaten me.’

For its 50th anniversary Swimsuit Issue, Sports Illustrated invited the winners of the “Second Half, 20th Century Gene Pool Lottery”, i.e., its former cover models, to assemble in one room for an historic shoot. Here’s video (“She was a long, cool woman in a black dress...”). In a roomful of stunners, Carolyn Murphy and Bar Refaeli stand out for me, but…your mileage may vary.

It’s a brilliant idea –sing rap and hip-hop songs, often containing sexually explicit lyrics, as a barbershop quartet. Jimmy Fallon had done it before but last night the “Ragtime Gals” made their Tonight Show debut. Here’s the video. Jerry Seinfeld became the first comedian to do stand-up in the Fallon era, and while his bit on cellphones was good, his rant on the couch about coddled children was even better. Seinfeld referenced a “stuffed-animal semi-circle of emotional support” on his children’s beds and wondered why every bedtime had to be a “royal jubilee coronation.”

Seinfeld also had a great term for being the Tonight Show host: “It’s a ‘pope job’. It’s a job you have until you die.”

The most dramatic difference between Fallon and everyone else (Kimmel, Letterman, Leno, Conan, etc.) is that he’s a performer first. Can you imagine Letterman being part of a barbershop quartet? Never. Not even to send up the entire construct. Fallon throws himself into musical bits and he’s actually quite good. Studio 6B is his basement playroom, except the pay is far better.

“You’re sad?!? I wasn’t asked to appear in this year’s SI Swimsuit issue.”

By now it’s clear that Christin Cooper’s post-race interview with American skier Bode Miller has overshadowed Miller’s bronze-medal effort itself. Might I suggest that it’s on the Mount Rushmore of Sochi Olympic moments? (Here, I’ve got a vomit bucket right here). Former SI scribe Jeff Pearlman suggests that parts of the interview were staged, though he does not name his source. I’m 98% certain that nothing about Miller’s emotions were disingenuous, but Pearlman does make a fine point about lovely Morgan Miller, Bode’s wife, being allowed into the Mixed Zone. Did she technically become credentialed media after NBC kept mic’ing her up during races?

Then there’s Keith Olbermann, who is media-astute and highly intelligent, but also possessed of the world’s largest blind spot. Olbermann rips Cooper and the media in general for playing up death in Olympic stories, and that’s fair.

“It’s interesting when people die/Give us dirty laundry,” as Don Henley once crooned. 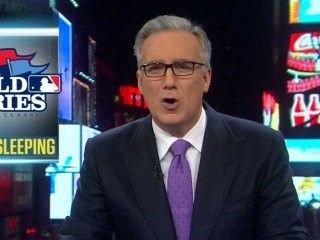 “I’m mad as hell–unless you work for Disney.”

Of course, television’s worst offender of the Overly Maudlin Feature is ESPN’s own Tom Rinaldi, whose frequent descents into death and debilitating illness inspired its own Spencer Hall blog post (that’s when you KNOW you’ve made it). Would or has Olbermann ever criticize Rinaldi or any other ESPN on-air personality on his show? And if he did, would he ever pursue it with the rabid zeal with which he went after Cooper?

That blind spot is what prevents a solid program from being terrific. Olbermann fashions himself as a latter-day Howard Beale for sports media, except that he has cut a deal with the devil (i.e., Norby….Norby is a euphemism for all Bristol suits) that he’ll never bite the WWL that feeds. Which is sort of like fashioning yourself as the world’s leading zoologist but you’re never allowed to visit the Amazon. Or Africa. (I’m not sure which one of those is the ESPN2 of zoology).

So, rant on, Keith. But every time you do, please have a flashing sign, like in one of those old Crazy Eddie ads, that reads “Unable To Criticize ESPN” on the screen as you do. The cast of HIMYM appears on Letterman and reads a list of “Top 10 Surprises in the Final Episode.” No. 5 is a gem, but it felt as if they missed a real opportunity here by not using some variation of “I marry Rachel just before she moves to Paris.”

Also, “spies” tell us that HIMYM’s entire cast will be taping an episode of “Inside the Actor’s Studio” to discuss “the craft” of sitcommery.

Missed out on a lucrative endorsement deal for Wheat Thins.

The son of a full-blood Cherokee woman, Wheat had three consecutive seasons of batting .359 or better and retired with a .317 average and 2,884 career hits. While so many other Dodgers (including the one above) are more acclaimed, it is Wheat who still holds the franchise records for hits, doubles, triples and total bases.