40 points, 10 assists, five boards and five steals for Russell in a pivotal Game 4 of the Western Conference finals, as OKC wins, 106-92. You can argue that Westbrook has not been the best player on his own team since high school –he was a college teammate of Kevin Love’s and has been an NBA teammate of Kevin Durant’s –but there may be no more self-assured player in all of hoops.

It’s funny. Russell is always No. 2, just like that other animated Russell whose big brother was the bigger star of the show (Even if it was named for a third character, “Hey, hey, hey!”) 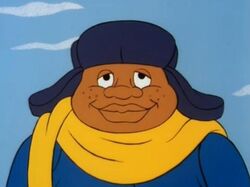 Remember the steal he made on Michael Conley late in Game 4 of their series? Or the three he took against the Clippers, in which Paul fouled him, that while ill-advised (and off-target), rescued them in Game 5 of that series? RW will make you grimace at times with his recklessness, but when he’s on, he can be the most potent player outside of LeBron. Edwin Encarnacion of the Toronto Blue Jays hit two home runs in April, but has since clouted 14 in May. The Blue Jays, winners of eight in a row, now lead the MLB in home runs with 76, nine more than the next closest team. Six different Blue Jays are in the Top 20 in the American League in Home Runs: Encarnacion, 2nd, 16; Jose Bautista, T-5th, 12; Colby Rasmus and Juan Francisco, T-12th, 9; and Melky Cabrera and Brett Lawrie, T-17th, 8.

Suspicious ff the Blue Jay way? Me?!? Why would I be? There’s nothing at all suspicious about the Jays having one-third of the American League’s top home-run hitters, one of whom previously served a 50-game suspension for PED use.

This is what happens when a disciplined civic leader such as Mayor Rob Ford takes a leave of absence –he left for rehab on April 30.

At Stade Roland Garros in Paris, sisters Serena and Venus Williams are both bounced by unknowns on Wednesday in the second round. If both had won –and Serena was the No. 1 overall seed–they’d have met in the next round. Coincidence? The sassy sisters have not met in a Grand Slam since the 2009 Wimbledon final and they’ve never enjoyed playing against one another, particularly in big matches. Lifetime, Serena has won 17 Grand Slam titles and Venus seven. 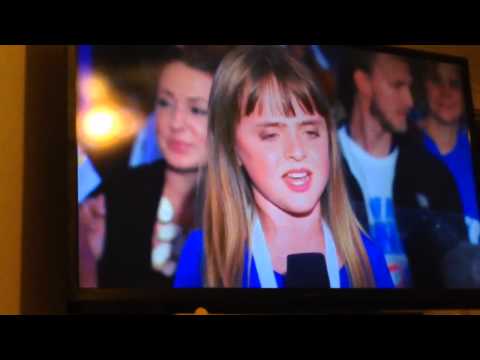 This is 10 year-old Olivia Kay of Edmond, Oklahoma. She sang the national anthem before Game 4 of San Antonio-OKC and her performance, not aired, was so magnificent that the “Inside the NBA” crew invited her up to their booth for an encore. This is what makes this show the best of its kind. Watch as she destroys “Rolling in the Deep” and as Shaq and Kenny fight to sign her…while Chuck just smiles in awe. Cool moment.

5. Pullman, Oxford, or Stark Vegas: They are coming/To your Ci-taaaaaaay! So, ESPN’s “College GameDay” maester, Lee Fitting (does he have brothers named Levi? Polo?), just tweeted, “This year, @CollegeGameDay will broadcast from a location we’ve never been to before. Always fun.”

That means one of three locales: Oxford, which unbelievably has never been a College GameDay site for the popular pre-game show despite having one of the most charming atmospheres and tailgating traditions (“The Grove”) in all of the sport; plus, frequent contributor Wright Thompson calls Oxford home; Pullman, because those people who carry the Wazzu flag to every site deserve to be rewarded, but then there’s the whole Pirate Captain conflagration over Bruce Feldman’s dismissal, which was ridiculous; or Starkville, which is the sexy SEC West dark horse this summer. But who wants to spend a Saturday in Starkville?

One Night Only: A Tribute to Don Rickles Luis Scola: If John Cusack had ever come down with a case of gigantism.

Indiana has been trolling the entire postseason, so why would anyone be shocked if they actually won this evening to force a Game 6 back in Miami? However, I like the idea of Miami possessing a killer instinct and forcing ESPN to come up with alternative programming for Friday.