The 5’9″ Swanepoel is what fellow South Africans would describe as “slightly above average.”

1. They Won’t Date You, Either

I’m going to go ahead and say that the timing for the release of the “Maxim Hot 100” (or as I refer to it, “Leo’s Grocery List”), the magazine’s annual ranking of the world’s 100 most beautiful women, might not be the best. Just days after a mass murder in Santa Barbara motivated by a deranged boy’s ire that the beautiful people are all hooking up and he isn’t.

Finishing atop the rankings is 25 year-old South African Candice Swanepoel who, perhaps not coincidentally, looks more like a Barbie Doll than anyone on the list.

Every Gregg Popovich press conference is the deposition scene from “The Social Network.”

The Spurs defeat OKC by 28 –they won Game  2 by 35 –to take a 3-2 lead in the series. Each contest has been won by the home team and by at least 11 points, prompting a direct and valid question by a reporter in last night’s post-game presser to Pop (thanks to Yahoo! Sports for this exchange, reprinted here):

Reporter: Five games, five blowouts. To us who don’t really know the game, how do you explain that?

Popovich: You’re serious. You really think I can explain that. … Heh …

Reporter: In simplest terms. I know you can. The question is “will you?”

Popovich: Good lord. And they pay you, don’t they?

Reporter: That’s why I’m not up there!

Kudos to the reporter, who is nameless in every story I’ve searched (more than half a dozen), whose “very little” line saved this from being an (other) awkward and uncomfortable exchange.

Here’s the truth, Ruth: Popovich gets away with being a jerk to the media because his teams consistently win. Granted, you can see that he’s probably a swell egg underneath (note his message to Craig Sager) and that he simply has contempt for the print media for wasting his time nearly every day. Got it.

But he often goes out of his way to be condescending. That act wouldn’t fly if he were coaching the Bucks.

George Springer: His bat is even more valuable than his million-dollar smile.

Lastros rookie George Springer hits his seventh home run in as many games, while…

The Blue Jays finally lost, to K.C., ending their win streak at nine games despite…

Edwin Encarnacion going yard –twice. That gives Encarnacion five multi-homer games in May and 16 homers this month, one shy of Barry Bonds’ dubious all-time record. My thoughts on that are encapsulated in the kicker line from this classic film scene. Yes, Mick does look like a crazy old cat lady.

The Rolling Stones performed in Lisbon on Wednesday night and were joined onstage for “Tumbling Dice” by Bruce Springsteen. That’s a pretty good old-timer’s lineup. And here’s Bruce earlier this year in New Zealand doing a kick-ass version of Kiwi native Lorde’s “Royals.” Yeah, baby, yeah! They outed me!

Story from last weekend, sorry I forgot: The CIA head in Afghanistan is inadvertently outed by the White House in a memo about POTUS’ visit to the troops there. And they may have gotten away with it except that they printed a second memo without his name on it.

I mean, if this is the incompetent level of being a sneak we have at our nation’s top levels, I fear for our nation’s welfare. 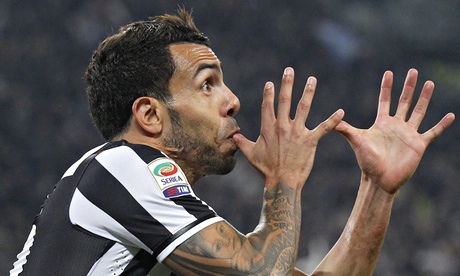 Carlos Tevez, an Argentinian, was Juventus’ top scorer and mime this season.

Lost amid the Madrid madness with the UEFA Champions League and the excision of Landon Donovan from the USMNT squad of 23, Juventus capped an amazing season in Serie A a little over one week ago. The Turin-based club won its third consecutive league title, or Scedutto, with a record of 33 wins, 2 losses and 3 draws. Los Bianconeri also became the first team in league history to eclipse 100 points (102), based on wins (3 points) and draws (1).

Does anything else need to be written?