Rooney did finally score a World Cup goal after more than 700 minutes of action, then reenacted the Battle of Britain.

Tuesday, Spain. Wednesday, England. The last time European countries fell this quickly in succession, the Third Reich was in power. If there’s any justice in the world, Wayne Rooney will miss his flight back to the U.K, but just barely.

England, which has the premier professional football league in the world–in fact, that’s what they call it, the Premier League –has not advanced to the World Cup semifinals since 1990. World Cup 2014: A few minutes with Wayne Rooney (and, yes, I know, it’s not his fault).

2. Know How I Know Uruguay? I’m not sure that Luis Suarez is the World Cup’s most polarizing figure, but Sports Illustrated did put him on one of its preview covers and the headline of the story within was something like, “Victory or Villainy.”

Suarez, who sat out Uruguay’s opening match with and upset loss to Costa Rica (!?!) while recovering from keyhole surgery (did you even know we had keyholes?), demonstrated emphatically yesterday why many consider him to be the world’s top footballer of the past year. He scored two magical goals in the 2-1 defeat of England, the first set up by a brilliant assist. Suarez, 27, scored 30 goals for Liverpool this past season, an average of 0.94 per game, the highest average the Premier League has seen since 1960-61. And not one of the goals were penalty kicks. And while he says a lot of stuff that people hate and is a renowned arm-biter, he may just be the most dangerous player in the tournament. Stay tuned.

This is Kate Bock. Like Stewart, she has also worked for SI.

Our friend Stewart Mandel, the most (the lone?) measured writer of all things college football, announces that he is leaving Sports Illustrated after 15 years for Fox Sports, joining good friend and fellow good guy Bruce Feldman (“Feldman!”).

Geographically, this makes sense, as Stew-pendous migrated from Brooklyn to Silicon Valley (from hipster to Hooli!) a few years bacck, and Fox’s college football coverage has more of a Pac-12 slant Feldman is based in Manhattan Beach, which means that one or both of them is going to log a lot of miles covering the sport this season (“S-E-C! S-E-C!”).

Stew’s writing is known for being knowledgeable and utterly divorced from bias. Which doesn’t stop readers from accusing him of hating their team. Because, hey, it’s college football.

As for what this means for SI, whose website had no college football editor per se last season but who has since hired an extremely able one, I don’t know. But Andy Staples has a lot more leverage; time to demand an “SI NOW: BBQ” show. 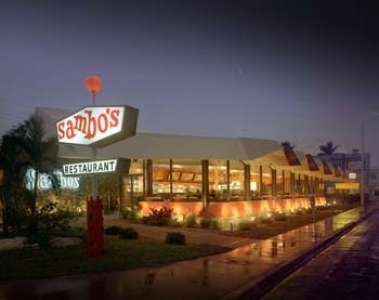 In 1979, there were nearly 1,200 Sambo’s. Now just one exists. Even though its founders never meant to give offense.

Was driving along the Garden State Parkway last night, and listened to a radio call-in show from Boston discussing the Redskins controversy. Per usual, the panel did not include a Native American.

Listen, I don’t know if the term should be considered racist or derogatory. What I do know is that I’m not in the position to be making that call. One guest on the show was former Redskins player Pete Cronin, who claimed that the entire issue “boggled his mind” and that in this world today we have far more important issues to deal with. Then he noted that he had to wake up early today for a golf tournament, because that’s presumably one of those far more important issues.

Dig: I taught Native Americans for a year and yes, it’s true, anecdotally, “Redskins” were their favorite team. But not because of the name; rather, because they saw a face on the helmets that resembled them and they identified with it. My litmus test of whether a name is offensive: refer to such a person by that in their presence. If they’re offended, that’s a pretty good clue.

What amused me most: The host, Morgan Something-or-other, was intelligent and rational. But he seemed genuinely on the fence on the issue. However, midway through the program he referred to one of his guests (name escapes me) as “the Face” of a particular Boston TV sports department, and then spent the rest of the show apologizing because he’d felt that he might’ve slighted that affiliate’s other sports personalities.

That was funny. When it’s someone seated next to you, you worry about giving offense. When it’s an entire race of people whom you may not know a single one of, it’s an issue for debate. I’m going to go out on a limb and say that calling someone the face of a sports department (which is actually a compliment to the person at whom it was aimed) is far less offensive than referring to an entire ethnic group of people by the color of their skin.

Also, the term “offensive” is no more absolute than “north” or “west.” It’s always relative to the person taking or not taking offense.

But that’s just me. What do I know? I’m not smart enough to host my own radio show.

Not on the list? Perry Como. (angry, surprised voice: “HEY!”)

Rob Sheffield of Rolling Stone lists his Top 25 Songs of 2014 So Far, none of which I recognize. Here’s 5 Seconds of Summer with “She Looks So Perfect.” (I agree with the top commenter, Ali Bassam, below on the YouTube video,

The Azzurri meet Los Ticos, both of whom won their opening Group D matches, in Recife (“Recife for disaster, that is”). If Costa Rica wins, and that would be an upset, Italy versus Uruguay would be an elimination game. If Italy wins, it advances and Los Ticos would probably need to defeat the Wayne Rooneys. Either way, you have two stylish teams here and Mario Balotelli plays for one of them.