Another Weekend Edition duo of It’s All Happening! curated by Jacob Anstey. Camp is set, and I am ready to go. 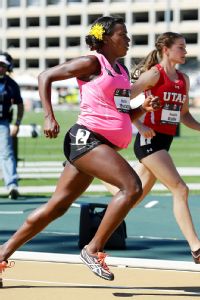 Five-time national champion and Olympian, Alysia Johnson Montano, is obviously a superb runner. Now, though, we know pregnant or not, Montano can run.

34 months pregnant and Alysia still has her game face on. As a middle distance runner, Montano specializes in the 800 meter run. Her personal best to date (was outdoors) for the 800 is 1:57.34. If you are a fan of track and field, or know the basics, you know breaking the two-minute barrier in the 800 is special.

This past Thursday, Montano competed in the U.S. Track and Field Championships. Her finishing time of 2:32.13 placed her last in her heat. The feat, however, is still magnificent.

Her soon to be daughter or son has already competed in the U.S. Championship. We’ll try to update you in 18 years when they attempt to do it again.

The joke is on you, suckers!

It’s outrageous! $225,000 for a speaking event at a fundraiser? How dare you abuse that university, Hillary Clinton. But, wait; someone actually agreed to pay that kind of cash for a soon-to-be presidential candidate (just forecasting, folks)?

As a collegiate student myself — and rational human being — I understand the students’ discomfort of such an expenditure. Money certainly does not grow on trees. I am sure UNLV president Elias Benjelloun is a smart fellow, but I must admit that he seems to be directing his anger at the wrong person. The regents who approved of the speaking fee, rather, should be getting lectured.

In short, you can’t give someone money then direct them towards where that money goes. That makes sense, doesn’t it?

Many will unleash their individual political lore on the subject. Before you do so, we would like to advise you in remembering the steps of rationality.

Is this the team Jabari tanked his workout for?

The Milwaukee Brewers are the first Major League team to 50 wins this year. Not all good things have good endings, however. The last team to reach the World Series and be the first to 50 wins was the 2006 Detroit Tigers. They lost to the Cardinals, who finished the season five games above .500, in five games.

We are halfway through the season, meaning there is still a lot of baseball to be played. If you are a betting individual, I’d advise against putting money on the Brewers to reach the World Series.

The lucky team in all of this is the Oakland Athletics. Currently 49-30, they have avoided the dreaded label of being the first to 50.

It has been a talking point on the Weekend Edition before. That is, Uber — which has been valued at $17 billion — is overvalued and is being pumped up with false ambition. The company, no doubt, has potential and is a cash-creating juggernaut. But it is no where near the value it has been handed. Instead, I believe it is closer to the $6 billion valuation that was pointed out by FiveThirtyEight writer Aswath Damodaran in a recent column he wrote.

Damodaran is somewhat conservative and kind in his valuation of Uber. The data is linked in his column and there is quite a bit. I am not a user of Uber or have much knowledge of the intricacies which is its technology, but I am skeptical if it can hold a strong enough market share to stay extremely profitable for long.

Not even FIFA can diminish the beauty in this.

If you have been on Twitter lately, you have been inundated with a mass of individuals that disdain soccer. For whatever reason they may think so, I don’t care. Before this year’s World Cup, my knowledge and interest in soccer was pretty dull. Then, about a week before the group play began, I started reading about the World Cup. Since then, I have been hooked. The beauty. The stories. The heartbreak. I can’t get enough.

I am not an expert on the game, nor will I pretend to act like one. No sport, however, should be ridiculed. You are free to speak as you wish, but don’t be a hypocrite. If you are bored, don’t watch. Problem fixed. Meanwhile, here is how the United States and Germany did ratings-wise for their 12 pm weekday game. I’ll let those numbers speak for itself.

The Round of 16 begins today, headlined by Brazilian forward Neymar. Get a morning run in, or something productive done, then enjoy the day’s festivities.