Mexico and its manager, Wet Herrera/Mexican Hodor, led the favored Dutch 1-0 through 87 minutes of their Final 16 match on Sunday. Then, in th 88th minute, Wesley  Sneijder of the Oranje got a sweet goal off a set piece. Then, in the 90th minute, one half of the Brave, Brave Sir Robbens had his toe slightly touched in the penalty box by a Mexican defender and went all opening scene of “Saving Private Ryan.”

A penalty kick ensued, to be struck by SuperHandsome Klaas Jan Huntelaar, who converted the goal and immediately signed a deal to appear in a remake of “Air Wolf.” 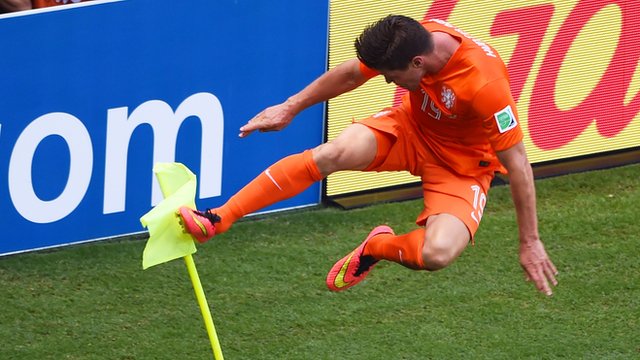 And here Jan Huntelaar shows off his martial artistry.

And so Mexico is out. The Men in Blazers’ lament.  As you know (are sick of), I’m utterly gobsmacked by this pair (to the point that I now annoyingly drop in British terms to my lingo), but I think my favorite thing is hearing Michael Davies’ saying, “Bob Ley’s Panic Room” so that it sounds like, “Bubbly’s Panic Room.”

2. Heat Up Some Leftovers?

Justin Theroux is the answer. The question: What would the disheveled spawn of Mel Gibson and Carson Daly look like?

It’s been a feast on Sunday nights all of 2014 so far. From the end of Walking Dead’s half-season to Rust Cohle and Marty Hart in True Detective to the Golden Globes, the SAG Awards and the Oscars, to Mad Men and Veep and Silicon Valley to, of course, Game of Thrones. So now that the feast is over, what remains?

Well, there’s a few weeks’ reprieve to allow critics time to sharpen their MacBook keys before the final season of The Newsroom gets underway (and, hey, Sloane Sabbith, nice boyfriend upgrade, by the way). Last night HBO attempted to sate our appetite with “The Leftovers”, an apocalyptic view of the world in which 2% of the Earth’s population suddenly vanishes.

Anyway, if you like the idea of Jennifer Aniston’s dude in a starring role and Amy Brenneman hanging out with a cult of smokers who don’t believe in shampoo, then this series is for you. I’m not sure how I feel about it yet. The most inspired scene may have come when the police chief, Mr. Aniston (Justin Theroux) is watching TV at a bar as a cable news channel lists all the celebs who vanished and one of them was Shaq, which leads me to wonder if Charles Barkley is not a producer. Here’s Alan Sepinwall’s review. Kershaw: Baseball’s most HoF-ready player under 30…but have you seen him in a single TV ad? (How about, “Kershaw Force?”)

Los Angeles Dodger ace Clayton Kershaw –not to be confused with Kate Capshaw, but why would you? –fans 13 Cardinals as the Los Angelenos defeat the St. Louisenos, 6-0. Kershaw’s last 3 outings:

Here’s a Not-Sucky profile of Kershaw by Grantland if you have a free half-hour or so.

4. The World’s Most Famous Serena 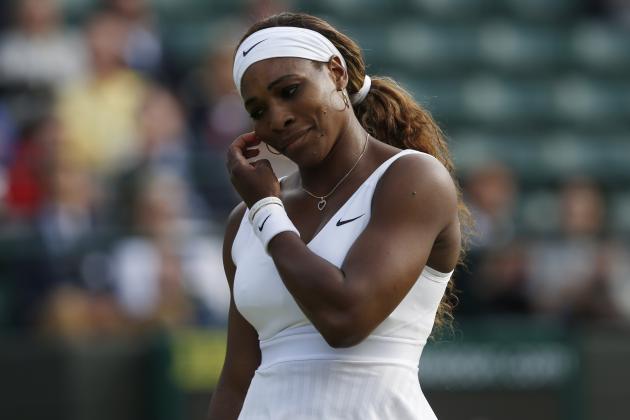 The most dominant female tennis player of the past decade? Serena Williams, who won 16 Grand Slams between 2002 and 2013, bowed out at Wimbledon in the 3rd round over the weekend against Alize Cornet, who previously had gone 0-13 versus Top 20 competition in grand slams.

Williams, 32, has now bowed out in the 4th, 2nd and 3rd rounds of grand slams this year –and incidentally, she has never even hit a grand slam in a baseball game! What’s up with that?!?– and next to 2014 on her Wikipedia page you will simply see the word, “Decline.”

Between you and me, I don’t think she’s ever going to catch Jack Nicklaus.

I happen to be white (No!) and I prefer Chris Rock to Kid Rock times, like, a thousand. Here he is last night hosting the BET Awards. I won’t ruin any punch lines for you other than to say that, like that dude Vanessa Williams used to sing about, he saves the best for last.

Where in the World? Hint: This is not a monument to Jamie Lannister