There’s a new sheriff in town

1. From Guns to Radar Guns

Remember that scene in Hoosiers where Norman Dale (Gene Hackman) kindly informs the townie to hand him the basketball and that his help will no longer be needed? That’s kind of what took place yesterday in Ferguson, Mo., as Governor Jay Nixon announced that the Missouri Highway Patrol would, at least for the time being, replace the local police.

Some interesting info on Ferguson first and the militarization of police departments in general:

One suggestion going forward: If you’re not actually a minority, exploit that. There should be more blacks on the police force and in local government. They have the numbers to make that happen. That would effect change.

Second, and I got this off CNN while the TV was on “Mute” (although my remote also has a “Moot” button), but it said that militarized equipment given to police departments in the USA totaled $1 million in 1990. Last year it totaled $450 million. Thanks, Osama Bin Laden. Nothing like good old-fashioned unwarranted panic to stoke the profits of the MIC.

The former Betty Joan Perske landed her first role, opposite Bogey, at the age of 20

Like Phyllis, Lauren Bacall was born in the Bronx and then married a dark and handsome fella who made his few words count. Unlike Phyllis, she was 20 and he was 45 when they wed –and her husband, Humphrey Bogart, was already married.

Bacall was more than just a pretty face. She played characters who were a little salty, who possessed just enough cynicism to be challenging without being crass. “You know how to whistle, don’t you, Steve?” she tells Bogart in To Have and Have Not. “You just put your lips together and…blow.”

(Although, technically, that’s bad information. You sort of pucker your lips and blow. This is why I was  not allowed on the set. That and my parents were at least a dozen years away from meeting.)

Here she is in 1952 giving marriage advice to Marilyn Monroe and Betty Grable in How To Marry a Millionaire. Kyle Wilson said he joined Tinder because he “didn’t want anything too easy,” which is like moving to Chicago for the climate

Tinder is to Match.com what Chip Kelly is to Nick Saban. More plays with less time in between each one. So it’s sort of funny to learn that some of the New York Jets are using the speed-dating app while embedded (hello!) at training camp in upstate New York.

Two thoughts: 1) “Love” is not what these Jets are looking for, and 2) The ladies of the Finger Lakes region are thinking, Oh, sure, now that Tebow and Sanchize are gone, NOW they discover TInder.

Medium Happy’s pick for national champion. Show me a team that came close, is hungry, and has one of the nation’s top 3 QBs.

Here’s Sports Illustrated’s preseason Top 25 and The Big Lead’s Top 50 football players –as penned by Tyler Duffy (“Go Blue!”), which may have something to do with that dude at No. 50 (and no one from a school about 4 hours to the southwest being on the list). But, you can kinda see that.

You can always quibble with such lists –I’d have included Arizona State’s Taylor Kelly and Notre Dame’s Jaylon Smith –but there are no egregious omissions.

This list, though, of the “50 Best College Towns,” is indefensible. Austin, Tex., arguably the best college town in the country is not included. And Athens and Eugene, both of which are in my top 10 (and most others’), fail to crack the top 35. 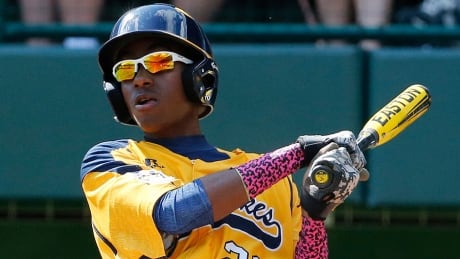 C’mon, who does he look like? A l’il bit, as Robert DeNiro might say, a l’il bit. Hint: He’s from Chicago and wears No. 23 (but only because that’s the uniform that fit). This is Pierce Jones of the Jackie Robinson West All-Stars out of Chicago. Yesterday he jacked three home runs and a triple –in the first four innings–as his team won their LLWS opener, 12-2.

And then you have Mo’Ne Davis, the female flamethrower out of Taney Little League in Philadelphia (the local favorite). There are eight U.S. teams in the 16-team bracket in Williamsport, and while Mo’Ne and Pierce are not immediately on one another’s schedule, they could wind up meeting in either the winners’ or losers’ bracket in a few days.