Last night Captain Ron appeared on CNN at around 1 a.m . Eastern time and in the midst of answering questions posed him by Don Lemon and Jake Tapper, invited them to hang out with him tomorrow (this) evening. You’ve never seen two cable news guys so excited. I’d love to see Anderson Cooper big-time them on this and demand to be air-dropped into Ferguson for this ride-along.

Meanwhile, a white photographer was tear-gassed and he became CNN’s top story for 20 minutes. He told Lemon, who asked him if he’d ever witnessed anything like this, that, yeah, he had because he’s from Albuquerque…where police have killed 26 people the past four years. Including this guy. And this guy. Gus Fring is impressed.

Of course, they’re standing behind a white line

And I loved when Lemon asked the freelance photographer if he was going to go to the hospital. The photog shot him a “Child, please” look as if to say, “Hospitals are for you corporate types with health care. I’ll just rub some dirt on it.”

Also last night: CNN went to its London studios for late-night coverage, where Rosemary Church wondered aloud why police in Ferguson would not “perhaps use, water cannons?” And watch the look that co-host Errol Barnett, a man whom I am convinced was constructed in a secret lab to be the Africanized version of Anderson Cooper, reacts.

I hope someone shows Rosemary this video before she returns to air. 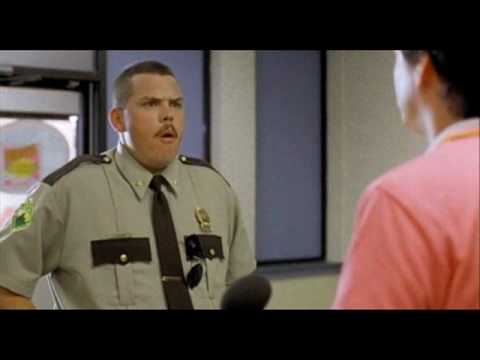 He really wants a Liter-O-Cola!

We still don’t know exactly how it went down between Michael Brown and Darren Wilson. What I do feel pretty confident saying, though, is that the police seem to prefer bullying to building bonds through civil discourse. It’s as if they’ve all seen Super Troopers and modeled themselves after Farva.

Finally, this is hilarious and oh so Fox News.

Not the best lab partner

Yes, I’m a proud Notre Dame alumnus. I’m proud that I attended a school that excels on the athletic field –it won the Capital One Cup for overall athletic excellence in Men’s Sports this past school year–and in the classroom, where it is currently ranked No. 17 in U.S. News & World Report.

Sure, he’s a cardiologist now–but he was also the kicker (and a damn reliable one)

To say that a Notre Dame football player is a typical Notre Dame student in the classroom is to say that I belonged on the two-deep because I passed Emil Hofman’s General Chemistry class (although I did catch a pass Steve Beurlein threw me at the end of practice one day; my roommate was a student manager and got me in).

Yes, I know –not believe, know–that as an institution Notre Dame does the right thing. But I also know that it opens the door for the investigation (no one has been found guilty of any wrongdoing) when it admits young men, almost all of whom are of good character, into a school where the course load is often over their heads.

Still, this video by 120 Sports is frighteningly cynical. If I’m to extrapolate Ro Parrish’s thoughts here, then recruits may be scared off of attending Oklahoma simply because they now know they can’t put a bitch in her place when she gets out of line. Sure, it seemed that OU would be fine with that when it accepted Dorial Green-Beckham, but now that it suspended Joe Mixon for the season, well…

The inimitable Don Pardo, the greatest unseen voice of my childhood next to Mel Blanc, passed away yesterday at the age of 96. It was Pardo who told contestants on games shows such as Jeopardy! and The Price is Right what they had won, and it was Pardo who did the roll call at the opening of Saturday Night Live from day one in 1975 all the way to last May (he missed one year of 39).

Pardo actually joined NBC in 1944–at at time when World War II was still undecided.

Besides the near four decades of introducing SNL each week, Pardo is also a legitimate part of U.S. history. It was he who provided the first NBC News bulletin after JFK’s assassination.

Don Pardo leaves us at the age of 96. But he will receive some lovely parting gifts.

He won’t pancake you. He’ll Jerry-mander you.

The young man on the left, Jerry Tillery, is rather large. He stands six-foot-seven, 317 pounds and is beginning his senior year at highly renowned (at least for football) Evangel Christian in Ruston, La. This photo may provide better evidence of his size differential to other players his age.

What I love about Tillery is that he’s kind of a nerd. The Notre Dame verbal commit –and I know, that means zilch — has a 4.0 GPA. But, he was spotted last spring taking in the LSU Spring Game. A change of heart. “To be honest, I didn’t go down to Baton Rouge for the spring game,” Tillery told a newspaper. “I was there for the state literary test.”

I’m with Jason McIntyre of The Big Lead on this: don’t get your panties in a bunch over JFF giving the MF to the Team Whose Name Cannot Be Mentioned. They laughed, after all.

The problem for the Browns is this: How much do you want your QB, whose not the next Peyton Manning, being Topic No. 1 on First Ache and PTI and ATH and The View? How much noise is worth this? Isn’t that what eventually made Tim Tebow quartbacka non grata?

Let Johnny be Johnny? Okay. But it’s beginning to suffocate the league. I mean, wasn’t Michael Sam supposed to be the distraction?

Finally, I am overjoyed to announce that we’ve secured the services, one day per week for as long as she doesn’t grow bored of it, of the utterly fabulous Katie McCollow to steer the MH ship. Katie’s pretty much my favorite humorist. Please, everyone, shower her with welcomes tomorrow and tell her that her hair looks nice.