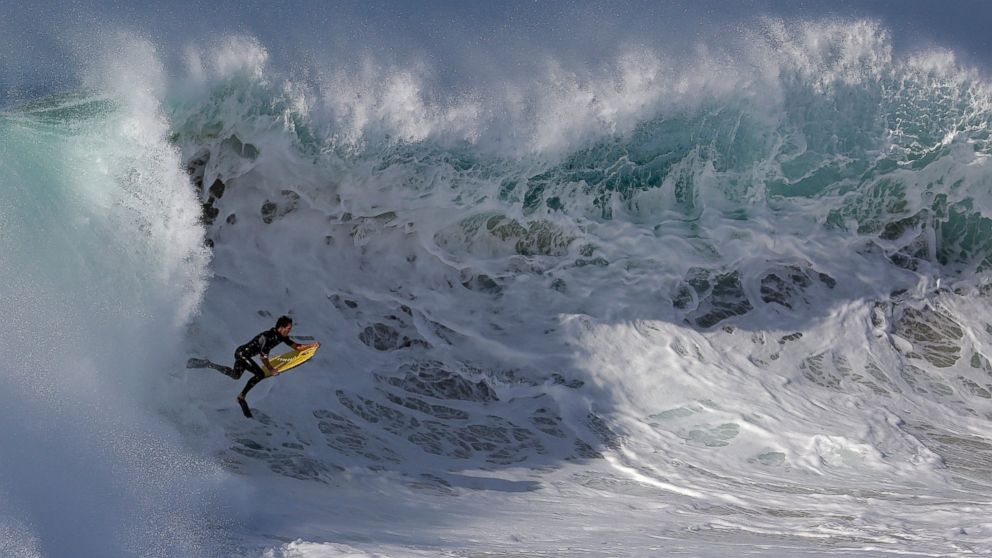 The Wedge at Newport Beach. I’m in awe of people who take on surf like this

What if a hurricane hit off the coast of California and neither hyper-possessed sharks nor Ian Ziering accompanied it? Welcome to this week on the coast of southern California, where tremendous swells have led to 10-15 foot sets.

It’s crazy to go in ocean like that, no? I mean, I love the beach as much as anyone, but look at that photo. Wow. If I’m the lifeguard, I’m like, “You know what, guys? I’ll be back at the guardhouse brewing a fresh pot of Peet’s. Why don’t you go handle the next rescue?”

Is it possible that Josh Shaw was just a little proud of himself at how he was outsmarting the adults? Was he singing “Twist and Shout” atop a vehicle in a parade on Figueroa Street?

So I wrote a story in Newsweek about the Josh Shaw mess yesterday (two, actually). Here’s what we know:

1) Josh Shaw lied–repeatedly. He has acknowledged as much.

2) USC asked him….over and over and over and over and over…and then, over…if his slightly incredible story was correct. They were staring in the face of their team leader and basically saying, “We don’t truly believe this, but you are Josh Shaw and we’re giving you the benefit of the doubt.” Plus, the people –not just family members–whom Josh pointed at as back-up on the story all corroborated his piece.  And Shaw was insisting that it was true.

What if you are USC and after all that you don’t run the story? Do you really think the media is not going to find out a team captain has two high ankle sprains? And do you really think he’s not going to tell them the same story he peddled to USC? And if you are USC and don’t run the story, you are telling your team captain, “WE DON’T BELIEVE YOU,” which is a pretty awkward thing to say five days before the season opener. Aaaaaaand, if the media gets a whiff of that, that you didn’t run this heroic story because you questioned its veracity, oh, they’re going to destroy you for that.

As one friend of mine who appears on TV regularly told me yesterday, “Rinaldi was probably picking out pocket squares after he read that piece.”

3) We’d love to get Josh Shaw’s side of the story: he’s not talking. He’s lawyered up. Even though no criminal charges are pending against him. What’s that about?

It was not until Wednesday that Shaw began backpedaling on his version of events.

4) In some ways, Shaw is guilty of the worst kind of pathological lie. In others, he’s painfully naive. To not understand that he’s not a nobody, that as a team captain at USC you just can’t expect to fabricate the type of story you did and not have the national media descend upon you to go all “Tell Lara Spencer exactly how it happened” and “Oh, can we get you in a two-shot with your nephew?” Really, now, Mo’ne Davis is SOOOO last week. In the immortal words of Geno Auriemma, “What a dope.”

5) No one –especially not me–is accusing Shaw of doing anything wrong. Except lying. But lying is a pretty big one. Especially a lie as big and bold and intricate as this one. For those who say, “All he did was lie, there was no harm done,” all I can ask is, “Are you already a congressman or a senator?” How sad and depraved.

6) Whatever Josh Shaw WAS up to on Saturday night, he considered it worth jeopardizing his standing at USC to lie about it and concoct this bizarre story. Why not just say he was goofing off with friends and tried to jump off a wall? He’s a college kid on a Saturday night. There’s lots of ways to claim you hurt your ankle without bringing a drowning seven year-old family member into the story.

7) He wanted it known he was in Palmdale, an hour north (and home of Lennay Kekua, incidentally) and not in L.A. Why? Finally, might it just be possible that he was getting a kick out of not only not getting in trouble for whatever went down at the Orsini Apartments, but for manipulating USC into making him a hero? Might there have been a little Ferris Bueller action going on, and might he not have been a little proud of himself for how shrewd he was? Maybe? 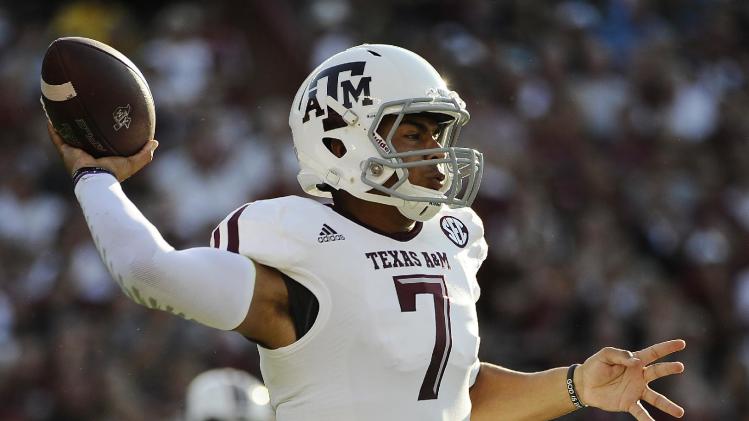 Hill was surrounded all night by Cock blockers and actually flourished.

The answer to “How will Texas A&M replace Johnny Manziel?” is “44 for 60 with 511 yards and 3 TDs in his debut, which just happened to come on the road in the SEC in a Thursday night game on national television.”

Or you can just say, “Kenny Hill.” The red-shirt sophomore out of Southlake, Texas, broke Manziel’s school passing yards and completions record in his debut. The Aggies won 52-28, somewhat muting the Ol’ Ball Coach on this evening in Columbia.

Also starring: Aggie true freshman defensive back Armani Watts, who made a series of terrific hits against the Gamecocks. Keep an eye on him. 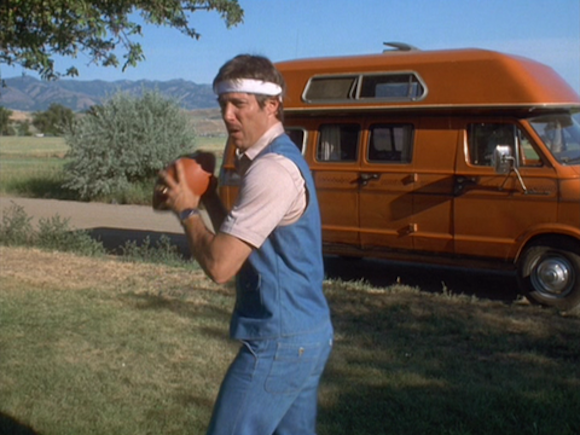 As soon as he throws this football over that mountain, Uncle Rico is headed to St. Louis for a tryout.

An oral history of Napoleon Dynamite? I’ll read it if I feel like it! GOL! With last night’s win in 3:59.92, Simpson earns the season championship in the world’s only prestigious track and field “league.”

Track stars don’t earn quite what NBA or MLB players do, so forgive Jenny Simpson her excitement at winning last night’s 1500 in Zurich and with it the Diamond League season championship and an extra $50,000. Watch Simpson hold off fellow American Shannon Rowbury over the final 50 meters and dive for pay dirt as if she were that other Simpson.

By the way, the British announcer here, whose name I don’t know, is cracking good. That was last year. This time Petit, tied at 45 hitters in a row with Mark Buehrle, would not be denied.

You know Rule 27: “You can always see something you’ve never seen before in baseball.” Last night San Francisco Giant pitcher Yusmeiro Petit retired the first eight Colorado Rockies batters he faced, bringing his total to a Major League-record of 46 in a row, before surrendering a hit.

Because it’s baseball, of course the batter who ended Petit’s streak was Rockies pitcher Jordan Lyles.

Petit’s streak stretched over eight games, most of them in relief. You may recall that last September, while on another streak, Petit retired 26 consecutive Arizona batters in one game before this happened.

Goodell Hunting: NFL commissioner walks the final step in the road to maturity: admitting he was wrong. It’s a start, Roger Goodell.

Mr & Mrs. Smith Finally Tie The Knot (as opposed to “tie the Nazi” which is something Aldo Raine would have gladly done) 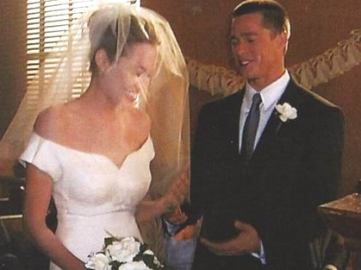 Where in the World?

It’s been so long, I’ll refresh your memory with the previous one: The Metropol Parasol, located in Seville, Spain, is made entirely of wood (heh, heh) No one actually enjoys playing the Midshipmen

Myles Jack on the East Coast

Honk if you hate John Terry

Katherine Webb ain’t walkin’ through that door (alas, a lass)

Who will be the fifth suspended starter? And how will Kathryn Tappen do?

It’s Georgia’s year. I can feel it.