Eastern Michigan’s cinder fellas. Shouldn’t they be running through that wall, anyway?

No. 1 Florida State, the defending champion with the defending Heisman Trophy winner, was up 17-0 at one point versus Oklahoma State but was then outscored 31-21. The Seminoles were nearly punished by the gods for forsaking their resplendent garnet-and-gold unis, but held on to win 37-31.

No. 2 Alabama endured their first of what should be many “Spaulding, get your foot off the boat!” moments between Nick Saban and Lane Kiffin while holding on to defeat West Virginia, 33-23.

No. 5 Ohio State trailed at halftime versus Navy. No. 7 UCLA led Virginia, 21-10, at halftime, but had not scored an offensive touchdown. The Buckeyes and Bruins both won, but did not dazzle. 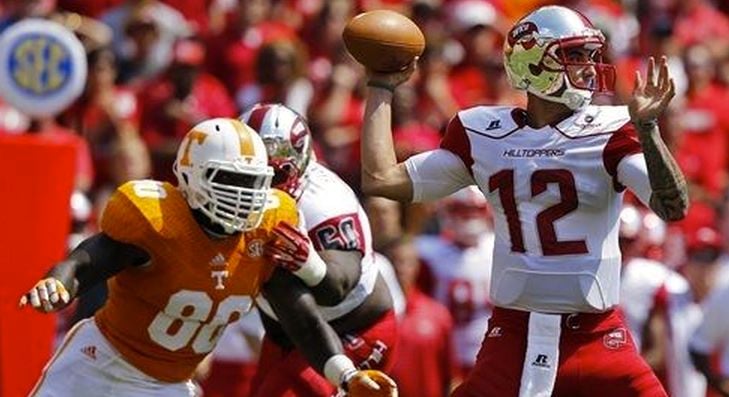 Western Kentucky’s Brandon Doughty completed 46 of 56 passes for a Week 1 best 569 yards and 6 TDs (and no INTs) as the Hilltoppers beat Bowling Green, 59-31.

No. 6 Auburn was tied with Arkansas at the half.

No. 3 Oregon romped, but allowed 13 first-half point to South Dakota.

No. 11 Stanford looked great, leading 38-0 at the half–but versus UC-Davis.

This was the highlight, and lone play, from the lightning-storm shortened FlorIdaho game. And yes, his name is Showers.

Here at Medium Happy, where we bequeath the Red Grange Award and will also do a Weekly Top 10 rankings are based entirely on a team’s performance and not preseason polls or what we expect them to do. As opposed to Bleacher Report, which kept Clemson (45-21 losers in Athens) and South Carolina (52-28 losers at home) in its Top 25, while failing to include a Cowboy team that lost only by 6 to the No. 1 team.

Note: Early season rankings are very fluid, as they should be.

Yes, people like you and me (well, not me) may take nudie pics, too, but there’s no value in those to the general public. So, yes, maybe you should be smarter about that if you’re someone who may normally appear in US Weekly.

Justin Verlander’s physique. Now I know why his ERA is up near 5. Get thee to a Cross Fit, JV.

Spare me the scolding, Chrissy Teigen. Your wealth derives entirely from people looking at photos of you semi-naked. As does your friend’s. So now you’re upset because it’s not you or she who controls how those pics are released? Stop. Yes, those are private pics and your pal Kate has a right to feel violated. Fine. But don’t tell us how to react to it.

Reeves can elude bullets, but time is trickier.

So, let me ask: Does this mean that if Reeves’ age goes below 50 from here on out, he will explode?

Here’s our boy as Johnny Utah. Always loved this film.

I’ve never attended the Burning Man Festival in the northern Nevada desert, but this year a record 66,000 people did. The reason? A sensational African-American female pitcher. Never mind.

Anyway, for the first time that we know of,  not everyone made it back alive. Alicia Cipicchio, 29, an art gallery manager from Jackson, Wyoming, was struck and killed by a vehicle after midnight. The vehicle was a double-decker bus bedecked in white fur and dubbed Shagadelica. Yeah, baby.

5. Opposite Ends of the Spectrum 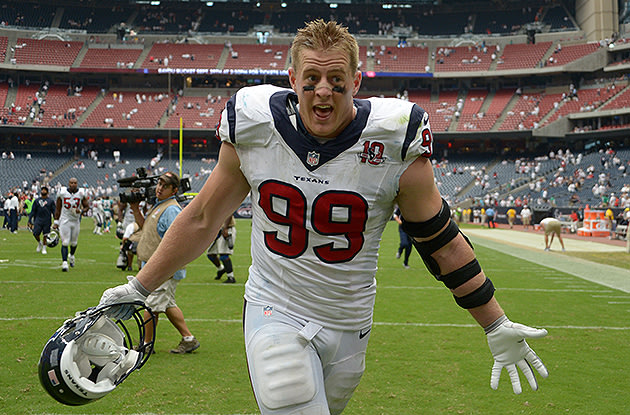 Houston Texan defensive end J.J. Watt, 25, formerly a two-star recruit by Rivals.com who initially attended Central Michigan, just became the highest-paid defensive player in NFL history. Six years, $100 million, $51.8 of it guaranteed, and there’s a decent chance he won’t even be the best defensive end on his own team in three years. Sam is good-looking, well-spoken and a former SEC standout. An ESPN gig? Sure worked for David Pollack.

Then there’s defensive end Michael Sam, 24, also a former two-star recruit who blossomed into the SEC Defensive Player of the Year at Missouri. Sam was cut over the weekend by the St. Louis Rams and has cleared waivers, which means that anyone can sign him to their practice squad.