“I’ll get Tommy Trojan over here and then we’ll see how tough you guys are.”

For posterity’s sake: Late in the third quarter, USC kicks a 25-yard field goal to forge a 10-10 tie with Stanford in Palo Alto. Then the Trojans are penalized five yards for “delay of game,” for not respecting that white space that rings the field. Coach Steve Sarkisian barks, so he earns a 15-yard unsportsmanlike conduct penalty (my guess is both flags came after repeated warnings about both).

Then Sarkisian claimed that USC was not delaying the game, but instead saving its cousin from drowning. Then, on the ensuing kickoff, from its own 15, USC loses a starter when Hayes Pullard is ejected for targeting. On the very next play, from USC’s 47, Stanford QB Kevin Hogan fumbles and USC recovers. 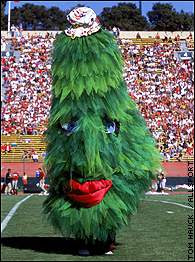 Responsible for fewer calls, if not passes, dropped

By this time someone on the USC sideline has already texted athletic director Pat Haden, a member of the 13-genius Selection Committee panel, and told him Stevie has poopy pants. Whatever. So Haden puts down the crab puff and hustles down to the sideline to be Sark’s champion in Trial by Combat. Meanwhile, the 3rd quarter conveniently ends –remember, USC has the ball again–and Haden, a Rhodes Scholar, commences to do something very dumb: advocate for his coach (“Fight on!”), during the game, with ABC’s cameras there.

Now, first, the genius who texted Haden, or the person who ordered that genius to text, is mostly at fault here. Second, by the time Haden arrived USC had already gotten the ball back and it wasn’t as if any of those three calls were going to be reversed, so what was the point of bitching? Third, big ups to Stanford for its in-game in-stadium mobile phone reception. Methinks The Tree is actually a cell phone tower. Finally, I don’t agree with my friend Dan Wolken that Haden needs to resign from the Selection Committee. I am heartened, though, that all the simpletons who thought a 13-member panel of enlightened post-hormonal geniuses and an expanded “playoff” would bring greater clarity –not to mention an improved product–are so quickly seeing the folly of their idea. It was always stupid. This weekend’s hi-jinks just prove as much.

Incorrigible Utes: Only A&M has scored more points than this Power 5 (vomit at the term) school that remains unranked.

Not to be confused with the AP Poll, where Utah, a school that apparently some voters have yet to realize is in the Pac-12, is not ranked despite beating Idaho State 56-14 and Fresno State 59-27. We’re not saying the Utes are even the best school in the Beehive State –No. 25 Brigham Young probably is– but how come they are not ranked while five one-loss teams are?

Texas A&M: Aggies have beaten a ranked team on the road, in a nationally televised Thursday night game, and are averaging 62.5 points per game, the most of any team that has played two games.

Oregon: Defeated No. 7 Michigan State with 28 unanswered 2nd-half points and are averaging 54 points per game.

Auburn: Have now covered 13 straight games —McMurphy’s Law–and have been the most impressive squad in the Tuscahasseeburn Triangle.

Oklahoma: Sooners have outscored opponents 62-3 in first half, which at this time of year is indicative of a focused team.

Florida State: The Seminoles should be No. 1, but they certainly have yet to play that way. Boredom? Self-satisfaction? This is a team that appears to be guilty of shellfish behavior.

Baylor: Only school in nation in the top ten in both Scoring Offense and Scoring Defense. No, the Bears haven’t played anyone. Most teams haven’t.

Georgia: Dawgs only 1-0,  but look even better after Clemson crushed  foe without hap, 73-7.

Alabama: Tide were a 42-point favorite. Led 41-0 when game was called in fourth quarter due to lightning. They are the anti-Auburn.

By the way, this weekend’s games are miserable. Georgia at South Carolina is the only one halfway worth watching, and I think the Doggies, off a bye week, will roll. Go out and run a half-marathon instead or something.

No joke: these are members of ISIS’ all-female brigade.

Intolerant of any religion or ethnicity that is not their own and hiding behind hoods and robes. Whom does ISIS remind me of….?

Anyway, The Obama appeared on “Meet The Press” yesterday and announced that he had hired Chip Kelly to go on offense against ISIS, or something like that, and that he will also lay out a “game-plan” in a nationally televised address on Wednesday.

Personally, I’ve always enjoyed this splice of footage from the 1994 Whit Stillman film Barcelona as a tactical and dynamic U.S. foreign policy.

From KO to OK in one easy press conference? Not so fast.

As my pal Arash “Guest List” Markazi tweeted, “seeing is believing.” The video of Ray Rice tossing a compact left hook at his then-fiancée, Janay Palmer, and knocking her out, obtained today by TMZ, puts this entire ugly affair in a new orbit.

Who saw this video –the NFL, the Ravens, the police?–and yet still only put Rice in a pre-trial diversion program and gave him a two-game suspension. The NFL is claiming it only just saw the elevator video today. If that is true, then maybe it’s time to give Rice at the very least an 8-game suspension. Worse, of course, is that prosecutors did not seek jail time against Rice. Untenable position.

As for you and me? If the NFL does not at least further punish Rice, let’s stop watching and attending games. At least for a weekend. Come on, America, I know you can do it.

Finally, yes, I don’t know why seeing the video should amp up the rage so exponentially. How did we think she came to be knocked out? The logic on this is solid, but the truth is that the video changes everything. It eliminates any doubt.

Get ready, home-gamers. Ali Baba, the Amazon.com of Asia and much of the rest of the world, will have its initial public offering (IPO) on September 18. The price range is expected to be $60-66 and I’d be surprised if it wasn’t above $100 per share by Christmas.

A quick note on high-profile IPOs.

There are, of course, many more companies that file for IPOs and whose stock plummets afterward. My point is that these are some of the more high-profile IPOs of the internet and Twitter age, when everyone can MMQB these companies. I didn’t even note Google or Apple or Pied Piper (!), but they’re all highly, even exponentially positive. I think Ali Baba (BABA) will go the same way. Besides, I’m going to like, as an investor, being known as BABA Walters.