Where to begin? How about here: Just after CBS promoted Norah O’Donnell’s “exclusive” interview with NFL Commish Roger Goodell this morning, it ran a countdown clock until the kickoff to its Thursday night football game…because there’s nothing else going on in your life until then.

Oh, Sports Illustrated, which boasts the highest-paid sports writer in the country, completely whiffs on the Ray Rice story because that writer, Peter King, took the word of a third party earlier this summer and assumed the tip as fact…without even bothering to fact-check it with the prime source. And if any of us fact-checkers had done that when I was there, the celebrated Peter Carry (Mr. Pearlman presented one side of the story; there’s certainly others, myself included, who rolled their eyes at that hagiography) would have ripped us a new one. Or had us writing “Faces in the Crowd the next three years.

…and also what it exposes about our reportage

Kudos to Peter King for owning up to his error but this is an egregious mistake for someone whose entire franchise, and it is a franchise, is built on his reportage of the NFL. As he himself said, “I didn’t do my job the right way (i.e., I did my job the wrong way)…I let you down.” Of course, that did not prevent SI from figuratively smashing Janay Rice in the face a second time by putting a screen grab of the elevator incident on its cover this week.

And by the way, all of us failed here. Me, too. Not just PK and SI. Any of us in the media who never reached out directly to the NFL or the Revel Casino and at least asked to see the tape, who never phoned the Atlantic County prosecutor’s office and asked for an explanation. All of us failed.

——O’Donnell’s interview of Goodell was mostly solid, but she missed a terrific opportunity to pounce. At one point she asked The Commish, “What changed?…Did you really need to see a video of Ray Rice punching her in the face to make this decision (i.e., upping the suspension from two games to “indefinite”)?” Excellent question.

Goodell responds, “No, we certainly didn’t…”

This is where Mike Wallace would have gone Crouching Tiger, Hidden Dragon on The Commish. Because, YES, they certainly did. The events bear that out. O’Donnell should have told him that his actions and his words are incongruent. She missed a golden opportunity for a KO (yes, I’m deliberately being insensitive here).

—-I don’t know Katie Nolan. People may infer from my Twitter comments that I do not like Katie Nolan. Not true. I just don’t like many of the arguments that she makes, and I do believe that a lot of observers simply buy them because she’s the cool girl who can hang out with the guys but all the guys also (not so) secretly have a major crush on her. Which, of course, is not her fault.

But let’s examine this essay, which, by the way, has been roundly hailed by the likes of Deadspin and SB Nation. She begins with, “How do I reconcile my values and beliefs with my love for a sport that has an ongoing issue with domestic violence?”

Oh, there’s a hand up in the second row. Yes, Mr. Walters? “How about you don’t reconcile them? How about you take the side of your values and beliefs and leave it at that? It’s impossible to serve two masters blahbity blah blah when one compels you to abandon those things yada yada which you profess to espouse.”

So, it can end there. But, that may not be enough for you or Nolan (it should be, though; most of the time, the simplest answer is the best).

Next, Nolan mentions the idea of a boycott, dismissing it out of hand because 1) It’s unrealistic to think that the majority would go along with it (Did you hear that, Messsrs. Adams, Jefferson, Hancock, etc.? Let’s not try it because, right or not, it may not work) and 2) “it would remove the critical thinkers from the conversation.” Except that boycotting is SPEAKING. As loudly as possible. Against a tyrannical power who isn’t taking your arguments very seriously in the first place, don’t you know. Like, the Boston Tea Party probably accomplished more in terms of getting King George’s attention than another town/Fanueil Hall, no?

My problem with her argument here is that, based on this logic, there is never a good reason to boycott anything. Unless she can specify it to why a boycott versus the NFL in particular is a bad idea, it’s a hollow argument.

And by the way, you don’t as an individual boycott the NFL (or any company) necessarily because you think it will work. You boycott it as your personal message to them and anyone who may know you that you do not accept the status quo. Perhaps others will see what you are doing and, as well, find the courage of their convictions. A boycott is the LOUDEST possible statement an individual can make. “You didn’t just lose me, Mr. President. You lost my vote.”

And maybe I’d buy Miss Nolan’s argument just a little if she did not confess in the next part that she had an opportunity to question Roger Goodell at a Fox function, but passed because she did not think it was appropriate at the time. Well, suggesting a boycott on a website that is owned by very powerful men who have a billion dollar contract with the NFL is probably also inappropriate, so whether or not you actually believe your own anti-boycott argument, I’m taking it with a grain of salt for the same reason you chose not to question The Commish: probably not a wise career move to advocate a boycott on a Fox-owned site. 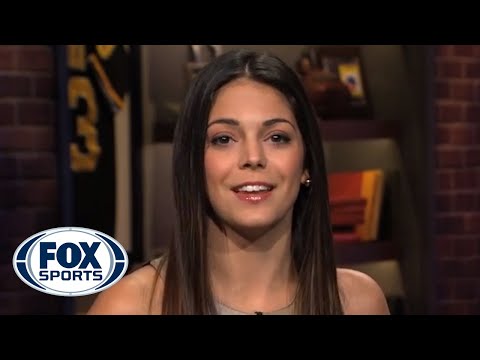 Moving on, Nolan takes a shot at ESPN’s Chris Berman when she could just as easily have taken a shot at, say, Terry Bradshaw. Again, that wouldn’t have been politically astute, now would it? Katie’s just one of us –she’s a pro at looking into the camera and making you feel as if it’s just you and she against the world — but she certainly knows who’s buttering her bread. So, yeah, let’s knock Boomer over on the other network and hope no one notices that I don’t have the balls to notice the cracks in my own house.

Finally, she basically pleads for a better job from her bosses. But it all comes down to this: Is there really anyone who doesn’t know that hitting a woman is a shameful act? And even if you put ten Katie Nolans on NFL pregame shows, won’t the producer then go directly to a stadium shot taken from waist level of a bouncin’-and-behavin’ cheerleader…who will in ten years or so marry Joe Buck and become a “credible “reporter for the NFL Network ( but that’s an entirely different story ), which is itself an ironic phrase?

(And, by the way, there actually are former NFL cheerleaders who have become credible reporters)

I think your NFL audience understands that striking a woman is a heinous act. It’s the men in the NFL locker rooms –not all, but a disturbing amount– who just don’t care. Because they’re young and they’re wealthy and they’re big and strong and nobody but nobody, and certainly not some man or woman on an NFL studio show, dictates to them how they will behave.

“All aboard for Fred Smoot’s Sex Boat!”

But you know what will get their attention? Loss of income. And you, as a fan, have no greater power in this respect than your wallet. And your wallet alone won’t mean much, but it’s a beginning.

I was talking to an ex-NFL player just two days ago about another ex-NFL player. He said that this guy used to walk into clubs wearing nothing but a fur coat and jeans and say to women, “Are we going to have sex tonight? No? Then get outta my face.”

That’s your NFL problem right there. Deal with that. Joe Nacho Cheese doesn’t need more females in the media to edjumicate him about how to treat a woman. And, understand, I’m all for more females having a larger television voice. Let’s begin with Sally Jenkins and Mary Carillo, the two smartest women in sports media I know. But Mr. Fan isn’t the problem. Mr. NFL Player is.

Two more things: If you care enough about a cause, you’re willing to risk something for it. I point to my own personal hero, Pat Tillman, as Exhibit A. You can also point to James Foley or Steven Sotloff if you like. Granted, fighting the Taliban (or exposing ISIS) versus taking on the NFL’s domestic violence problem may, for most, seem to be crises on entirely different levels. Understood. The point is, though, that these men didn’t think twice about what was more valuable: their principles or their safety.

Katie Nolan sat in front of a camera and told me that, when she had the chance, she was not willing to risk appearing rude. And that’s fine. But now she tells me that, hey, if given a more lucrative job with greater visibility, well, yeah, she’d be willing to say something. I don’t consider that a profile in courage.

And, finally, this: the Buffalo Bills were purchased yesterday, after the latest Ray Rice tape was released, for what is believed to be a record price of $1.4 billion. The NFL is printing money, so while they’d like it if their players stopped punching wives and girlfriends in the face, or at least started treating bitches with the same respect they afford their moms or grandmothers, business is good. They hear you, Katie, they’re just not listening. And they won’t take you seriously as long as you continue to participate in three fantasy leagues and base your entire week around Sunday.

As William Rhoden said on CBS This Morning, “We can’t continue to be addicted to this game.” He’s right. But what is it going to take for the rest of you to listen to him? Apparently, the footage of Ray Rice punching his fiancee in the jaw is not enough.

3 thoughts on “It’s All Happening!”